Celtic Quick News on News Now
You are at:Home»Football Matters»O’CONNELL THRIVING AT WALSALL
By CQN Magazine on 24th February 2017 Football Matters
ON-LOAN Celt Eoghan O’Connell has admitted he is thriving at League One outfit Walsall.
The Republic of Ireland centre-back joined the club last month on a temporary deal until the end of the season.
O’Connell, 21, has already featured in eight games for the Saddlers – one more than at the champions in the first five months of the season.
He has formed a formidable partnership alongside James O’Connor and Matt Preston in boss Jon Whitney’s 3-5-2 set-up.
O’Connell said: “I think the formation suits me and the team. We’ve been good defensively, which is very pleasing.
“We’ve had a good shape, been organised and, even when we’ve conceded goals, it’s not like we’ve been opened up. 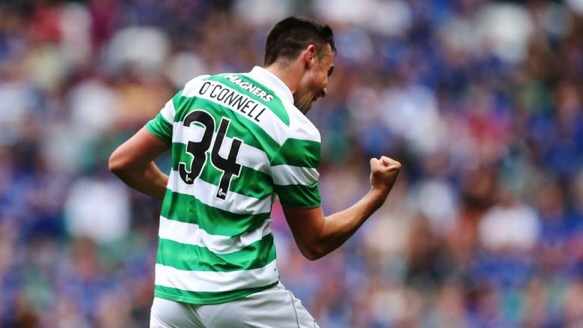 “I think me, Matty and Jimmy are building a good understanding.

“We’ve played together now for the past eight games and we know what each other is going to do.

“We are forming a good relationship and I think we have proved that in the games we have had together.”

O’Connell, who has also had loan spells at Oldham and Cork City, revealed he is still coming to terms with the demands of playing in England’s third tier.

He added: “We’ve had a good run of results and I feel I’ve done all right performance-wise.

“It’s been good to have a run of games and my body is having to get used to a Saturday-Tuesday schedule.

“However, it’s just great to be playing games because that’s what I’m here to do.

“I’ve played every minute so far and, if I can keep that run going, I’ll be really happy.”

*Get TWO great Celtic books for the price of one and both will be signed by the Celtic stars of the past. Order Andy Lynch’s brilliant Hoops Stars and Stripes, one of the Scotsman’s sports books of the year, and you will receive a signed copy of Charlie Gallagher?What a Player! by David Potter.
Both Andy and Charlie have signed their books for you. Order now at HERE or click on the ad below.