MATT O’RILEY arrived at Celtic just over a month too late to win his first senior medal.

The stylish 21-year-old midfielder was preparing for an English League One match at Lincoln just a few days after Kyogo Furuhashi had fired a second-half double to clinch a 2-1 victory over today’s opponents Hibs in the Premier Sports League Cup Final at a rocking Hampden Park on Sunday December 19.

O’Riley is hoping to make up for lost time and has his eyes on the prizes with the Hoops three points ahead in the Premiership and poised for today’s High Noon kick-off against Shaun Maloney’s men in Edinburgh with 11 league games left to play.

Plus the Scottish Cup is also in the Englishman’s sights with the quarter-final against Dundee United at Tannadice due on Monday night on March 14.

ON THE RUN…Matt O’Riley has wasted no time in settling in at Celtic after his move from the English third tier.

O’Riley insisted the club’s dismissal from the Europa Conference League against Bodo/Glimt in the storm-lashed Arctic Circle during the week is NOT a disaster.

It was clear the one-time Fulham prospect and Tom Rogic struggled in the treacherous conditions and on a plastic pitch which forced Ange Postecoglou to withdraw both at the interval as the Hoops headed for a 5-1 aggregate exit.

However, an upbeat O’Riley looked at the possibility of a domestic clean sweep and said: “That has to be the focus for us now.

“We’ve got the league and the Scottish Cup to concentrate on. We want to win both of them and we feel like we can.

“The mood is still good in the camp. We’re disappointed about Thursday night, but it gives us more of a chance to focus on the league.

“A lot of people outside, like the fans, won’t feel this is the end of the world because we can concentrate on the league and Scottish Cup.

“The title is definitely there for us and it’s our intention to win it.” 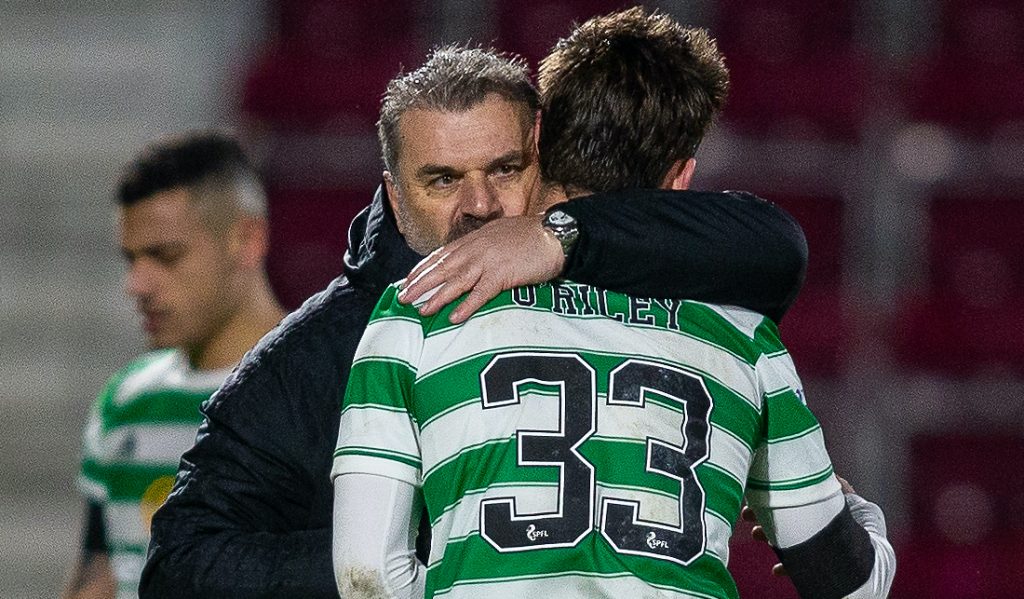 THAT’S MY BHOY…Ange Postecoglou congratulates Matt O’Riley after a Man of the Match performance in the 2-1 win over Hearts at Tynecastle.

O’Riley, who cost £1.5million near the end of the January transfer window, told the Sunday Mail: “The pressure is obviously different here, but I’m enjoying it more.

“I’d rather be playing under pressure every week because it makes you play better.

“The demands are much higher because a draw is considered a loss here – no matter who you play against.”

The Hoops can extend their advantage to six points with a win over the Edinburgh club with their nearest challengers kicking off against Motherwell at Ibrox three hours later.