FORMER Celtic star Jonny Hayes will be one of Aberdeen’s dangermen as they attempt to topple the champions on Flag Day at Parkhead on Sunday.

The boyhood Hoops fan saw a dream come true when Brendan Rodgers brought him to the club in June 2017 – ironically after he opened the scoring for the Dons in the previous month’s dramatic Scottish Cup Final in which Tom Rogic claimed his unforgettable last-gasp winner.

Hayes, 35, returned to Pittodrie at the end of his contract three years later and, remarkably, in now playing for his THIRD manager over that period with Jim Goodwin now in charge after the sackings of Derek McInnes and Stephen Glass. 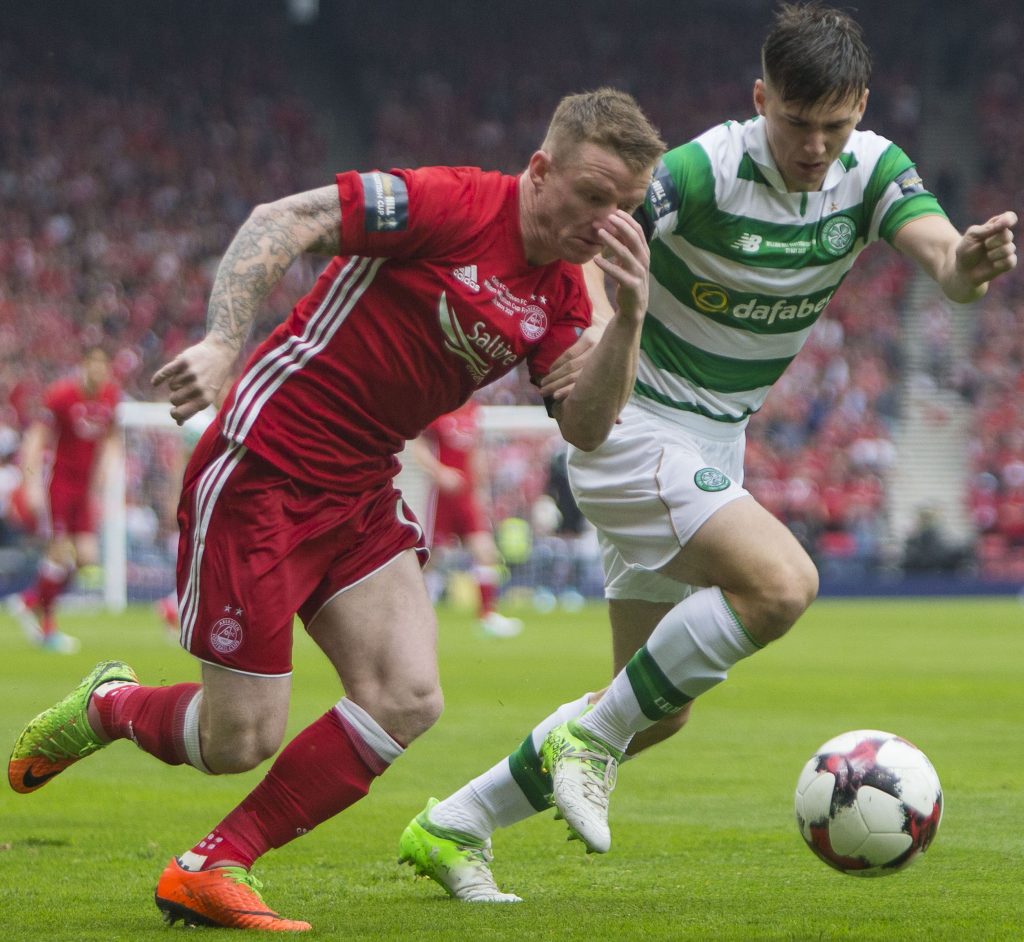 RED FOR DANGER…Aberdeen’s Jonny Hayes takes on Celtic defender Kieran Tierney in the Hoops’ 2-1 win in the 1917 Scottish Cup Final. 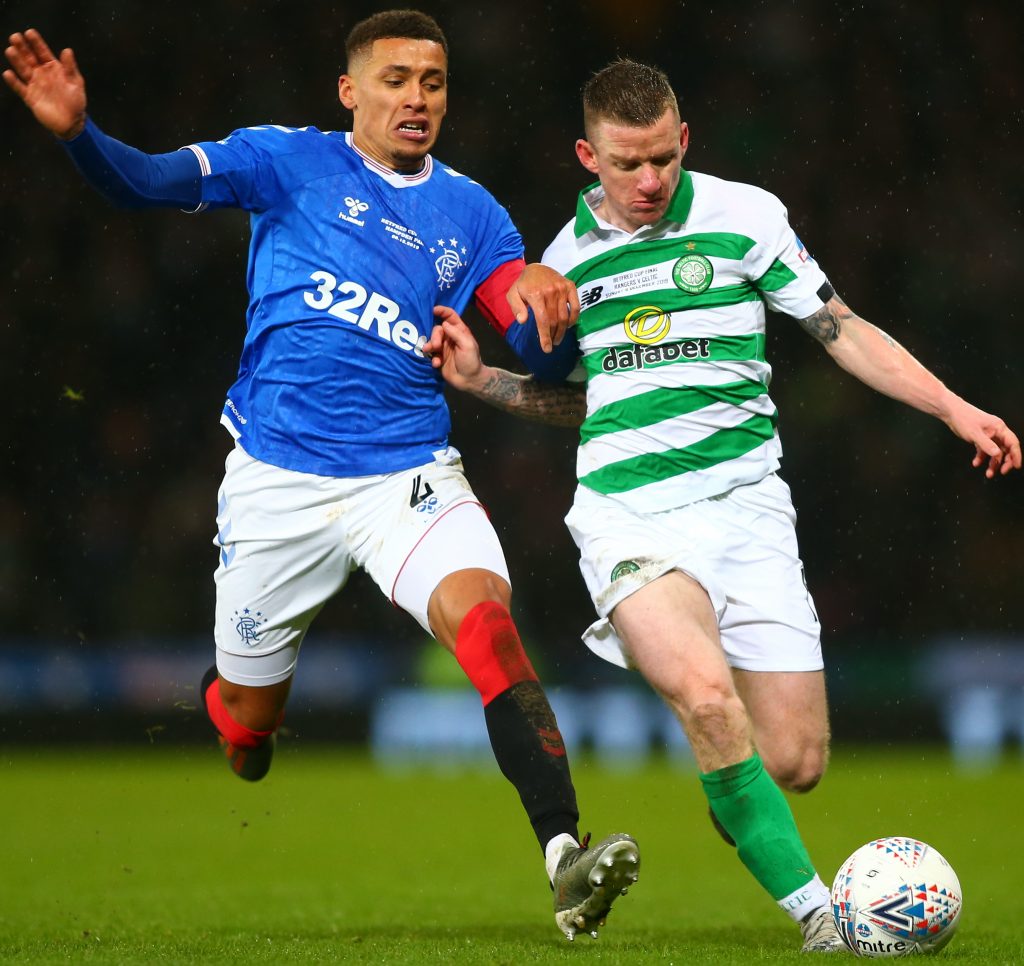 GREEN FOR GO…Jonny Hayes races away from Ibrox captain James Tavernier in Celtic’s 1-0 win in the 2019 Betfred League Cup Final.

He insisted: “Aberdeen are ready for their Celtic Park acid test.

“I watched the Dons book their place in the last 16 of the Premier Sports Cup with the minimum of fuss thanks to a 3-0 win against Raith Rovers at Pittodrie on Sunday.

“With a maximum 12 points secured, 12 goals scored and none conceded, the League Cup campaign has gone as well as manager Jim Goodwin could have hoped for.

“I was very impressed with what I saw against Raith. I know it’s early days, but it really looks like a team transformed from the side which limped across the finishing line last season.

“Jonny Hayes is back in an attacking role and looking as influential as he was first time round, while the goals and confidence is flowing through the team.” 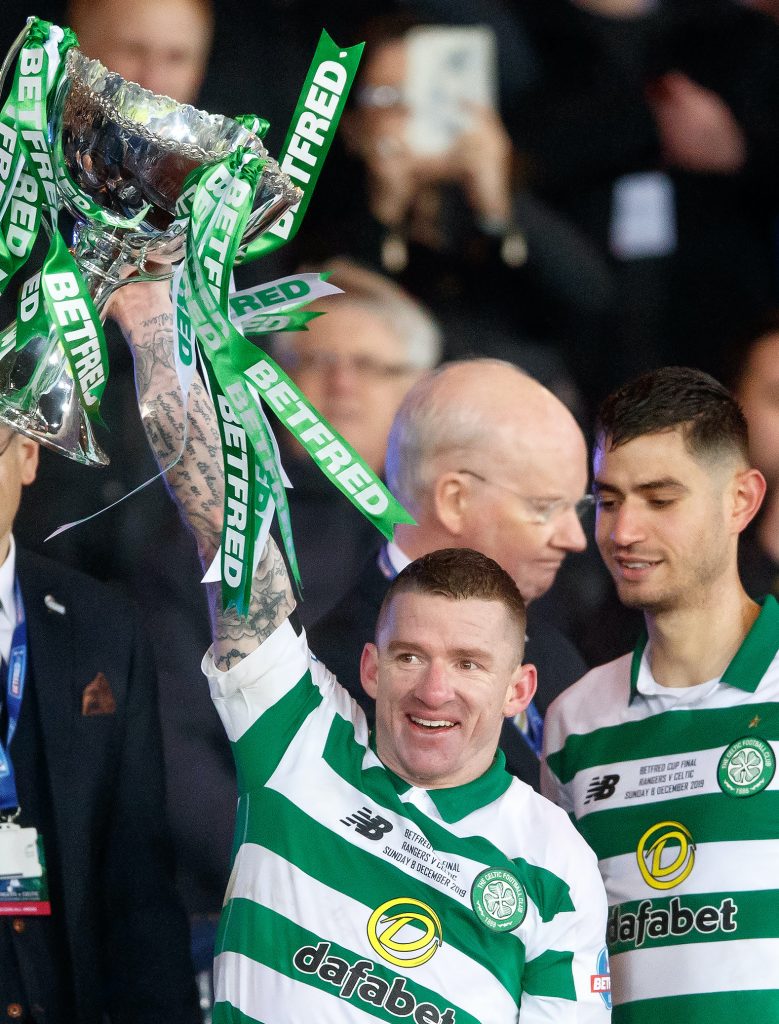 JONNY BE GOOD…a beaming Jonny Hayes holds aloft the 2019 Betfred League Cup with Nir Bitton next in line for the silverware.

Shearer, who scored 55 league goals in five years with the north-east club after joining from Blackburn Rovers in 1992, continued: “It would be easy to reflect on four good wins, but the Dons boss was quick to let his players know they need to be better than they were in the first 20 minutes against Raith when they face the champions.

“He’s also still looking to add to his squad, too, which is great to see.

“Callum Roberts, who scored 17 goals for Notts County last season as a winger, will be an intriguing addition if, as expected, he completes his move to Pittodrie.”

JOY BHOYS…Jonny Hayes and skipper Scott Brown share a joke during a lull in training at Lennoxtown.

“Ange Postecoglou has done a terrific job in assembling a top-notch Celtic team and Goodwin will know his side will be tested much more than they have been.

“I’m still not sure there is ever really a good time to get Celtic, but, given you have to play them sometime, the opening day of the season is as good a time as any.

“Whatever the outcome, I’m hopeful this Aberdeen team will let the Hoops know they have been in a game come the full-time whistle.”