Celtic Quick News on News Now
You are at:Home»Latest News»OLI ESCAPED ‘BOOT UP THE BACKSIDE’
By CQN Magazine on 10th August 2019 Latest News

OLIVIER NTCHAM has responded to a talk-in with Neil Lennon after the Frenchman’s ill-advised and wayward comments in the summer.

However, the Celtic boss revealed the midfielder did not receive “a boot up the backside” when he was asked to explain remarks which were made when he was with the French squad in the Euro Under-21 Finals.

Ntcham, bought by Brendan Rodgers for £4.5million from Manchester City in the summer of 2017, was quoted as saying he was “really disappointed” a move to Porto had fallen through last year.

He has been motivated, though, since his delayed return and put in a Man of the Match performance in the 2-0 win over Nomme Kalju in Estonia as the Hoops eased through to the third round of the Champions League qualifiers.

Now, with the team 90 minutes away from play-off ties against Slavia Prague after the 1-1 draw with Cluj in Romania in midweek – where Ntcham made an impact as a 67th minute replacement for Lewis Morgan – the player could get the nod to start this afternoon’s High Noon kick-off against Motherwell at Fir Park.

Certainly, the playmaker made an instant impact in last Saturday’s 7-0 romp against St Johnstone when he came off the substitutes’ bench and scored with his first touch of the ball to claim his side’s fifth goal.

What has sparked the 23-year-old powerhouse back to life? What was said when he had the face to face with the manager?

Lennon, speaking to the Daily Record, answered: “I wouldn’t say it was a kick up the backside. There was no dressing room dressing down. It was just an open chat with him. 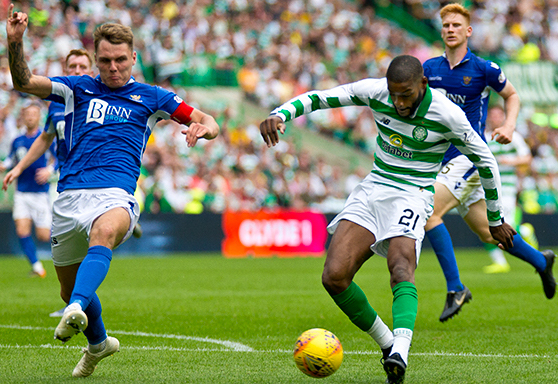 KICK-START…Olivier Ntcham scores with his first touch of the ball against StJohnstone last week.

“It was about getting his head around the fact if there wasn’t any firm interest then this is a pretty good place to be.”

Scott Sinclair was linked with a move before the English transfer deadline on Thursday with newly-promoted Sheffield United and Championship sides Derby County and Preston showing an interest in the 61-goal forward who is in the last year of his contract.

Lennon cleared up the winger’s situation by saying: “There was some interest, but nothing materialised, so we carry on as normal.

“Scotty will be in the squad and he’s a player who can make a big contribution. He has been unfortunate as at the moment he’s finding it difficult to nail down a place because of the form of others.”

Looking to the game against Well, the Irishman added: “It’s a quick turnaround. We got back at 4.30am on Thursday morning and you can’t do much in training on Friday with a noon kick-off.

“It’s about mental and physical recovery.

“But we’ve got the likes of Ntcham, Shved, Griffiths and Jullien who are all champing at the bit to play.”

* DON’T miss the unbeatable match report from Motherwell v Celtic this afternoon – only in your champion CQN.