Celtic Quick News on News Now
You are at:Home»Latest News»OLI LOOKS TO THE FUTURE
By CQN Magazine on 14th March 2019 Latest News

OLIVER BURKE’S future at Celtic is still unclear with only two-and-a-half months of his loan deal to run, as CQN reported earlier this week.

His parent club West Brom sacked Darren Moore at the weekend and he had been the manager who was insistent the 21-year-old attacker would return to the Hawthorns in the summer.

The Championship outfit are searching for a permanent replacement and Jimmy Shan, who has been named caretaker boss, was in charge last night when they beat Swansea 3-0 to move into fourth place in the table.

One thing that is certain is the powerful forward is back in Scotland’s international plans after a two-year exile after being called up yesterday for the Euro 2020 qualifiers in Kazakhstan and San Marino.

Burke was told the news by his club and country team-mate James Forrest as he spent the day at Cheltenham Races with some of Neil Lennon’s first-team squad.

The pacy frontman, who has claimed four goals since he arrived at Parkhead on his temporary transfer in January, is delighted with his amazing switch in fortunes.

Burke, speaking in the Daily Record, said: “James came up to me and said: ‘We’re in it!’ It was a great feeling. I didn’t know anything about it so to hear the news like that was wicked. We got the emails confirming it later.

“This loan deal has been really successful for me. It’s got me back on track and kick-started my career again. 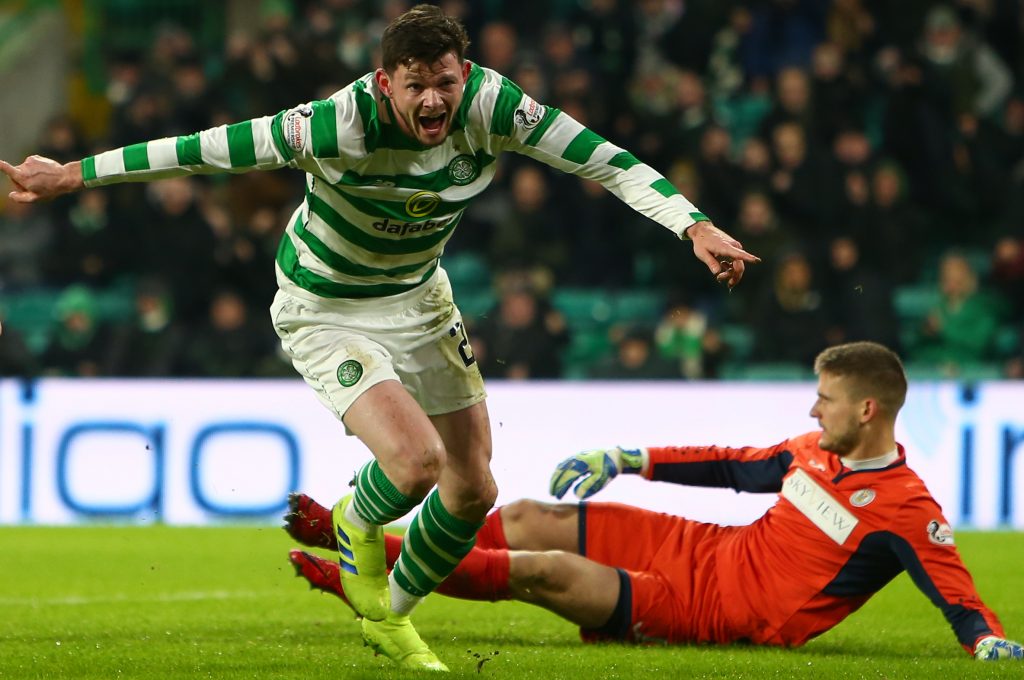 A WINNER…Oliver Burke turns away in celebration after scoring his first Celtic goal against St Mirren.

“I went from starving for football, not playing at all and almost being the forgotten man.

“When you go from being almost the main man, the star with all those headlines, to suddenly not being involved at all and down with the 21s instead of the first team, it’s hard.

“When I was at West Brom I’d travel with the team then not actually be in the squad. It has a massive impact on you as a player and almost has you not believing in yourself.

“When things are going so badly, you wonder what your next step is and where you go from there.

“So, I’m really happy I chose such a great and big club with great people in it who have put their arms around me and really given me that confidence and belief in myself.

“Now I’m almost happy these things happened because it’s made me realise as a player how important it is that each day you grab your opportunity.

“Silverware was another massive motivation in coming here. I don’t think I’ve won any trophy – except maybe one of those little ones kids get at a trial day for scoring the most goals.

“It would be amazing for me and for the club to win silverware, it really gives me that motivation to push on and help the team as much as I can.”

Burke is poised to make his 15th appearance for the Hoops when Neil Lennon takes the team to face Dundee in Sunday’s Premiership encounter at Dens Park, where the champions won 5-0 in late October.