OLIVIER NTCHAM has revealed what Brendan Rodgers said to him on the day he signed from Manchester City in a £4.5million deal in July 2017.

The Celtic boss spotted the potential in the French Under-21 midfielder, but also saw an area where he could improve his game.

Ntcham, who has agreed a new four-year deal with the champions – as CQN reported yesterday – said: “I have improved a lot in all aspects of my game since coming to Celtic.

“When I was on loan at Genoa, I didn’t score a lot of goals and I have improved in that area.

“The manager told me when I signed that I needed to score more to become the complete midfielder. He said that to me on the first day.”

Ntcham, 22, was the subject of interest from Portuguese giants Porto in the summer, but admitted he was never in a rush to leave Parkhead.

He said: “I’m happy when I hear that. It means that I had been doing great work.

“I felt as though I had a great last season and it was like winning a trophy for me to hear this, so I was pleased with that.

“But I am happy with life in Scotland. I enjoy everything – well maybe apart from the food.

“However, I think it says everything that when I sign a new deal, it shows that my mind is here and everything in my thinking is here.

“When the market was closed, the manager, myself, the agent and the club all spoke and we decided to have a talk to sign the new deal.

“It wasn’t difficult for me to concentrate because I am just focused on the pitch. What happens away from the pitch is for my agent and for my family to talk about.

“If you start to think about other things and not focus 100 per cent, your mind does not fix on the pitch.”

The powerhouse midfield operator saw his friend and compatriot Moussa Dembele leave in a £19.7million switch to Lyon on deadline day, but Ntcham gave credit to his former Hoops team-mate. 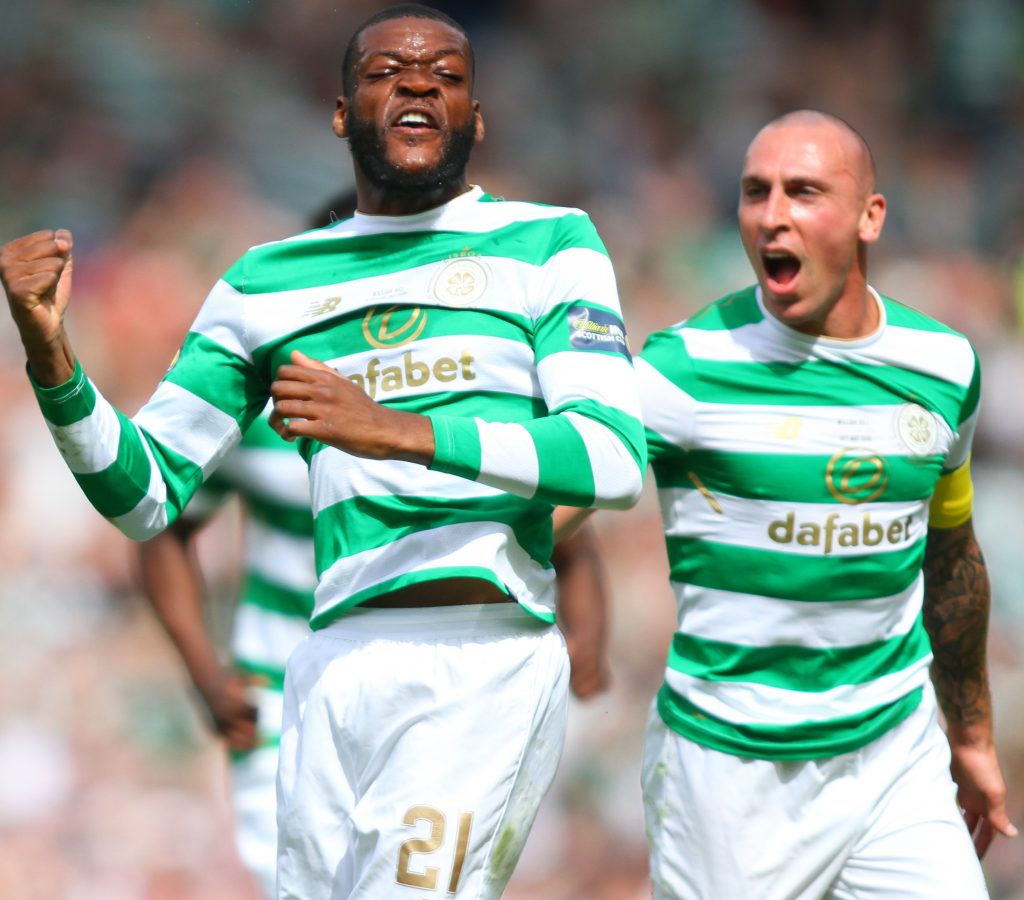 HAMPDEN HOORAY…Olivier Ntcham celebrates his goal against Motherwell in the 2-0 Scottish Cup Final in May. He is about to be congratulated by a delighted Scott Brown. Pic: Geo.

He added: “When I signed for Celtic, I spoke with Moussa.

“He told me that it was good to come to Celtic to play in the games, to score some goals and to win some trophies.

“When I have got here, I have seen that and I have been happy.

“If he was going to go, life is like that. Of course, I miss him, he is my friend, but we stay in touch all of the time and he is pleased for me that I have agreed this deal to stay at Celtic.

“It’s good to have the other French-speaking boys around the club, even though it’s not the case that we are always together.

“Even when you are on the pitch, there can be times when you may not understand something, but there is always someone there who can translate the message and manage to get the point across.”

Ntcham had to battle with Stuart Armstrong for a starting place alongside skipper Scott Brown when he first arrived in Glasgow.

The Scotland international was first pick for most games at the beginning of the historic double treble-winning season, but the Frenchman displayed dogged determination and a lot of skill to take his place in the top side in the run-in to the term.

Ntcham was in the starting line-up to face Motherwell in the Scottish Cup Final and repaid his manager’s faith by rifling in the killer second goal in the first-half as the holders lifted the trophy again following a 2-0 success.

It was the perfect manner for Celtic and their new Bhoy to bring down the curtain on a magnificent period in club folklore.

And, clearly, Ntcham is looking for a lot more silverware in the future.