Celtic Quick News on News Now
You are at:Home»Match Report»ONE FOR THE ROAD: ABERDEEN 0 CELTIC 4 (Game four, Oct 27)
By CQN Magazine on 20th May 2020 Match Report

AN UNSTOPPABLE Celtic cyclone blew Aberdeen away with the champions producing a scintillating display at Pittodrie this afternoon.

Neil Lennon’s men anticipated a tough confrontation against the Dons, but Derek McInnes’ side were simply pulverised into submission long before the interval.

The Hoops went in at half-time leading 4-0 and it must be said the scoreline did not flatter them. It was a performance that highlighted the team’s power and precision as they dismantled the opposition.

Fraser Forster could have caught up with his reading during a comfortable 90 minutes where the home team weren’t allowed the opportunity to lay a glove on the visitors.

The procession got under way early on and left the Dons weak at the knees as Celtic attacked from all angles.

START OF THE ROUT…Odsonne Edouard eases past Scott McKenna before slotting home.

GOAL No.1 arrived in the 10th minute and came as a result of a piece of magic from Odsonne Edouard, who once again displayed his breathtaking class in the north east sunshine and sleet.

The Frenchman accepted a throw-in from Jeremie Frimpong, touched the ball to James Forrest, accepted the slick return and took off for the heart of the Dons defence.

Edouard was calmness personified as he meandered forward, bewildered Scott McKenna with a dip of his shoulder and then flashed a low right-foot drive past the helpless Joe Lewis with the ball ricocheting into the net off the foot of the right-hand post. 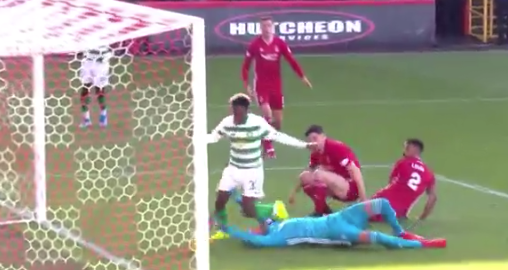 EASY DOES IT…Jeremie Frimpong scores his first goal for the Hoops.

GOAL No.2 was claimed by the lively Frimpong, once again turning in a superb 90 minutes with his forward surges that terrorised the luckless Niall McGinn who was replaced at half-time by a compassionate McInnes to save him any further punishment.

The Dutch teenager swept away from the Dons forward, knocked a pass to Edouard and kept on running. The striker intelligently rolled a ball into the box and the former Manchester City prospect got in to take advantage of a scramble in the goalmouth.

The ball broke off Shay Logan and Frimpong was alert as he rolled the ball over the line from under the crossbar. 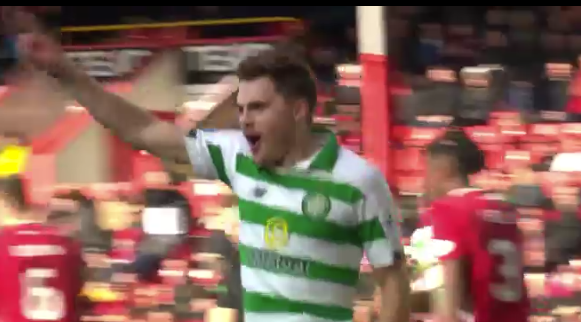 IN WITH A SHOUT…James Forrest shows his joy after netting No.3.

GOAL No.3 came after the Dons were ripped to shreds with a spectacular sequence of 13 passes with Boli Bolingoli, Tom Rogic and Mohamed Elyounoussi involved before James Forrest latched onto a pass and fired the ball beyond the exposed Lewis.

DOWN AND IN…Mohamed Elyounoussi hits the deck as his right foot shot heads for the Dons net.

GOAL No.4 arrived in the 44th minute as Frimpong and Rogic combined to set up Elyounoussi who swept in a right-foot shot. The Dons defenders could only look at each other and wonder how much more was to come.

Naturally, the tempo faded after the turnaround where Nir Bitton replaced the injured Christopher Jullien.

Frimpong, Rogic and Elyounoussi came close to adding to the scoreline and Lewis had a magnificent full-length diving save to his right to claw away an Edouard free-kick from outside the box.

Lennon took off the star frontman in the 70th minute to introduce Vakoun Issouf Bayo and near the end Jonny Hayes replaced Elyounoussi.

The scampering Frimpong lit up the afternoon with his exciting thrusts into enemy territory and he must love playing for this team. This was his third appearance and so far the champions have scored FIFTEEN goals – Partick Thistle hammered 5-0, Ross County routed 6-0 and the Dons downed 4-0.

Long may it continue!