Celtic Quick News on News Now
You are at:Home»Match Report»ONE FOR THE ROAD: ABERDEEN 1 CELTIC 2 (Game nine, Feb 16)
By CQN Magazine on 20th May 2020 Match Report

KRISTOFFER AJER struck a memorable late winning goal to fire Celtic to a THIRTEEN-POINT lead at the Premiership pinnacle after an almighty struggle in difficult conditions at Pittodrie this afternoon.

Ironically, the Norwegian’s 81st-minute strike came following a mesmerising, sweet flowing move on a day where the champions toiled to put a few passes together against opponents who fought and snapped into every challenge.

With the clock ticking down and two points about the escape, Fraser Forster started the move with a ball downfield that was tamed in an instant by Odsonne Edouard and then passed to Callum McGregor rampaging forward from his own half.

The midfielder brought James Forrest into play, and he skipped inside two challenges before spotting Ajer taking up a great position unmarked inside the Dons box on the right.

The ball was inch-perfect as it arrived at the feet of the defender. Ajer was composure itself as he tamed the pass, looked up and saw Joe Lewis racing from his line. And, with a mighty swish of his right boot, he sent an unstoppable effort whizzing high into the net from 12 yards.

It was a goal as soon as it left his foot and it was an effort worthy of winning any game.

THE WINNER…Kristoffer Ajer fires No.2 behind Dons keeper Joe Lewis.

The wind and the vigorous nature of fired-up opponents made it a tense and tricky 90 minutes for the champions, but they deserve enormous credit for fighting their way through to maintain their 100 per cent record in 2020.

The first-half, however, was not memorable from the Hoops’ point of view, despite opening the scoring through McGregor.

Sloppy defending allowed the Dons back into the contest and keeper Lewis, the goal apart, was rarely troubled during that period.

And yet it looked all so different in the 10th minute when the champions took the lead with a slick effort that shredded the opposition’s back lot.

Leigh Griffiths got the move in motion when he won a race for possession with Scott McKenna and slid the ball in front of Edouard. The Frenchman immediately attracted a swarm of defenders around him before laying it off to his right to the lurking Forrest.

The winger swerved one challenge and tried to curl the ball low beyond Lewis, but the Dons No.1 stretched to paw the ball away. It fell for the inrushing McGregor and he confidently and calmly tucked it in low at the right-hand post.

MAC THE KNIFE…Callum McGregor turns away after thumping the opener past Joe Lewis. 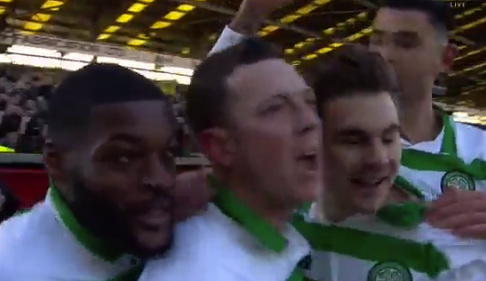 The travelling fans sat back and awaited a goal deluge, but, instead, Derek McInnes’ men battled their way back into the game and, utilising the wind, began hitting long balls for Curtis Main to chase with Christopher Jullien and Ajer being asked to continually turn to deal with the Dons’ bustling frontman.

Referee Andrew Dallas was quick to award the Dons a free-kick on the edge of the box when it looked clear Lewis Ferguson had barged into Jullien and, thankfully, the deadball gift was squandered.

Greg Taylor, who was clearly toiling with a knock, was taken off in the 25th minute to be replaced by Jonny Hayes.

Celtic’s balls out of defence were wayward and wild and were being regularly picked up and returned by their opponents as they looked for the equaliser.

It duly arrived in the 27th minute and Ash Taylor was afforded the freedom of the city after another set-play hadn’t been properly cleared. It was played back in again from the right and Nir Biton was taken out of the equation as the ball dropped at the back post.

Griffiths was slow to react and the centre-half was allowed to kill the ball on his chest and then drill a right-foot drive away from the helpless Forster.

It was a dreadful goal to concede and, as expected, it acted as a massive boost for the home side who sensed this might be their day.

Celtic were making little impact on the flanks and it took until the 36th minute before Forrest was given the opportunity to run at Matt Kennedy and he swept past his opponent and sent over an inviting cross, but, frustratingly, there were no takers.

Three minutes later, Connor McLelland was booked for a shameful attempt at trying to win a penalty-kick with a pathetic dive.

Griffiths, too, found his way into the ref’ book after speaking out of turn after yet another free-kick decision had gone the way of the Dons.

PICK IT OUT…Ajer nonchalantly lifts the ball over Joe Lewis for the winner.

Eleven minutes after the turnaround, there was a surge forward from the home side that had been typical of their game plan. Edouard lost position just inside the opponents’ half by Ferguson and when he switched the ball to Niall McGinn FIVE Dons players raced into the danger area. Once again, though, Jullien and Co held firm.

In the 58th minute, Lennon made his second change with Ryan Christie replacing Griffiths.

Tom Rogic then came on for Ntcham in 79 minutes as the Hoops gaffer had his last throw of the dice.

The Irishman changed to a back four with Ajer switching to the right and Bitton partnering Jullien in central defence.

And how well it paid off when the Norwegian international went on a surge down the flank nine minutes from time.

It was an astounding goal, but it wasn’t as amazing as the miss from Edouard – you may have to read that passage again – three minutes from the end that would have killed the game as a contest.

Forrest picked out the team’s talisman with a superb pass from the right and it looked as though the Frenchman was about to claim his 25th effort of the season.

He fluffed the first attempt, but was gifted another opportunity when the ball broke back to him about two yards from goal. Edouard somehow managed to hit the grounded Lewis and the chance went abgegging.

However, no-one was talking about that extraordinary miss at the end of yet another hard-earned and well-deserved triumph.