Celtic Quick News on News Now
You are at:Home»Match Report»ONE FOR THE ROAD: HEARTS 0 CELTIC 2 (Game six, Dec 18)
By CQN Magazine on 20th May 2020 Match Report

CELTIC eased five points clear at the Premiership pinnacle as strikes from Ryan Christie and Olivier Ntcham gave the champions victory at rain-lashed Tynecastle this evening.

It was more efficient that entertaining from Neil Lennon’s men, but it was mission accomplished as they overcame desperate opponents on a dodgy playing surface which invited mistakes.

The goal that broke Hearts arrived in the 28th minute and it was a thing of beauty as the Hoops swept up the park with a series of quick, stabbing passes that exposed the home side’s rearguard.

Jeremie Frimpong had a hand it in – quite literally – with a throw-in from the right to Ntcham who switched it on to Kristoffer Ajer. The Norwegian rolled it to Scott Brown who knocked it on to Callum McGregor who transferred it to James Forrest. The Edinburgh players were chasing green-and-white shadows as the winger, playing on the left, passed to Odsonne Edouard who took out three defenders with a cute back-heel.

The ball was intended for Forrest, but Christie snapped onto the pass and, without any preamble, struck a stunning left-foot drive from 20 yards low into the keeper’s left-hand corner of the net. It was breathtaking stuff as the opposition was dismantled with a sweet movement that carved open the opportunity. 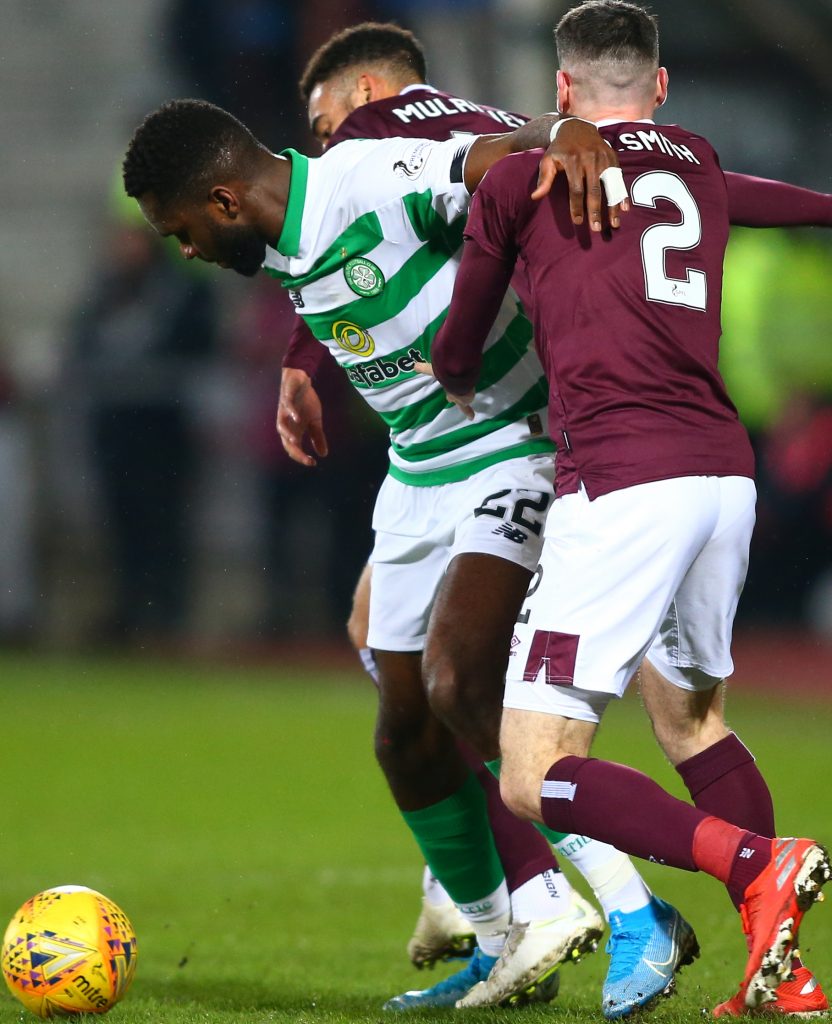 In the 40th minute, Ntcham doubled Celtic’s advantage and once again the home side had no answer to a raiding party that zipped through their defences.

Brown won a ball in the middle of the park and set Forrest free as he raced in from the left. He timed his run to perfection before hitting a blass across goal that missed by Edouard at the near post, but the intelligent Ntcham continued his run into the danger zone and first-timed a vicious effort high into the roof of the net.

Two incisive moments had wrecked a good and spirited opening spell from the host who went into the encounter in joint bottom position along with Hamilton Accies on a measly 12 points. 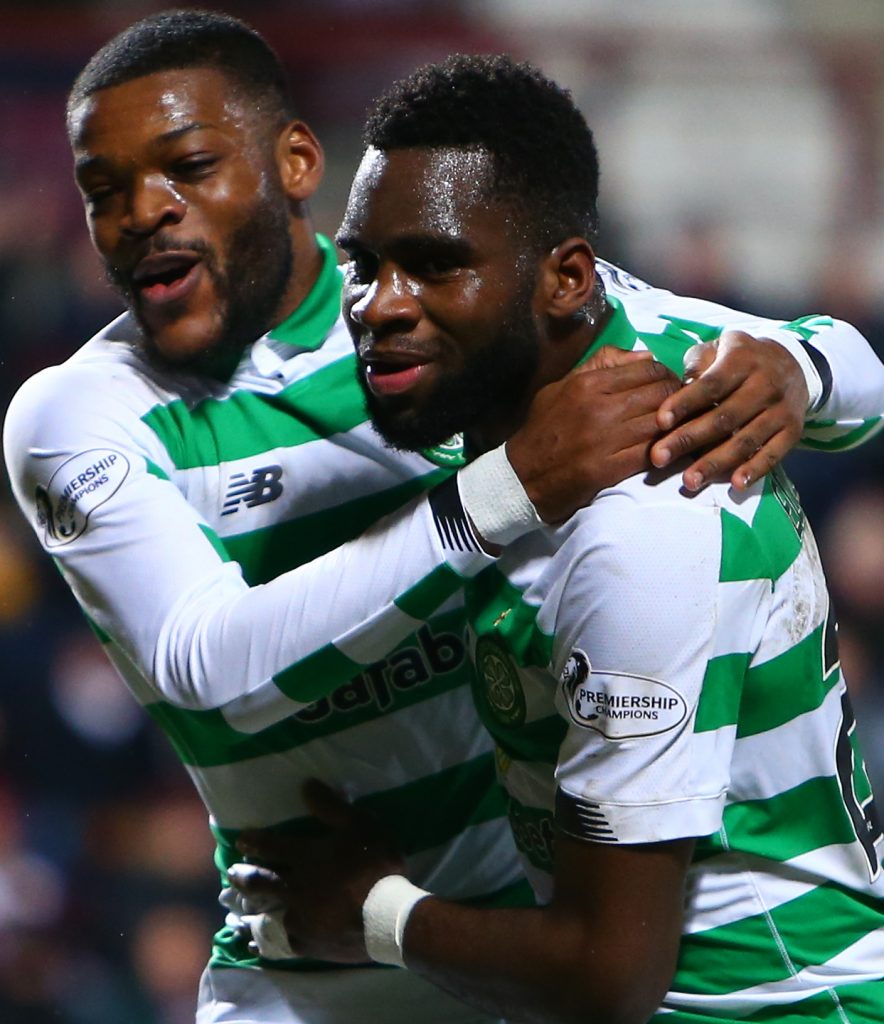 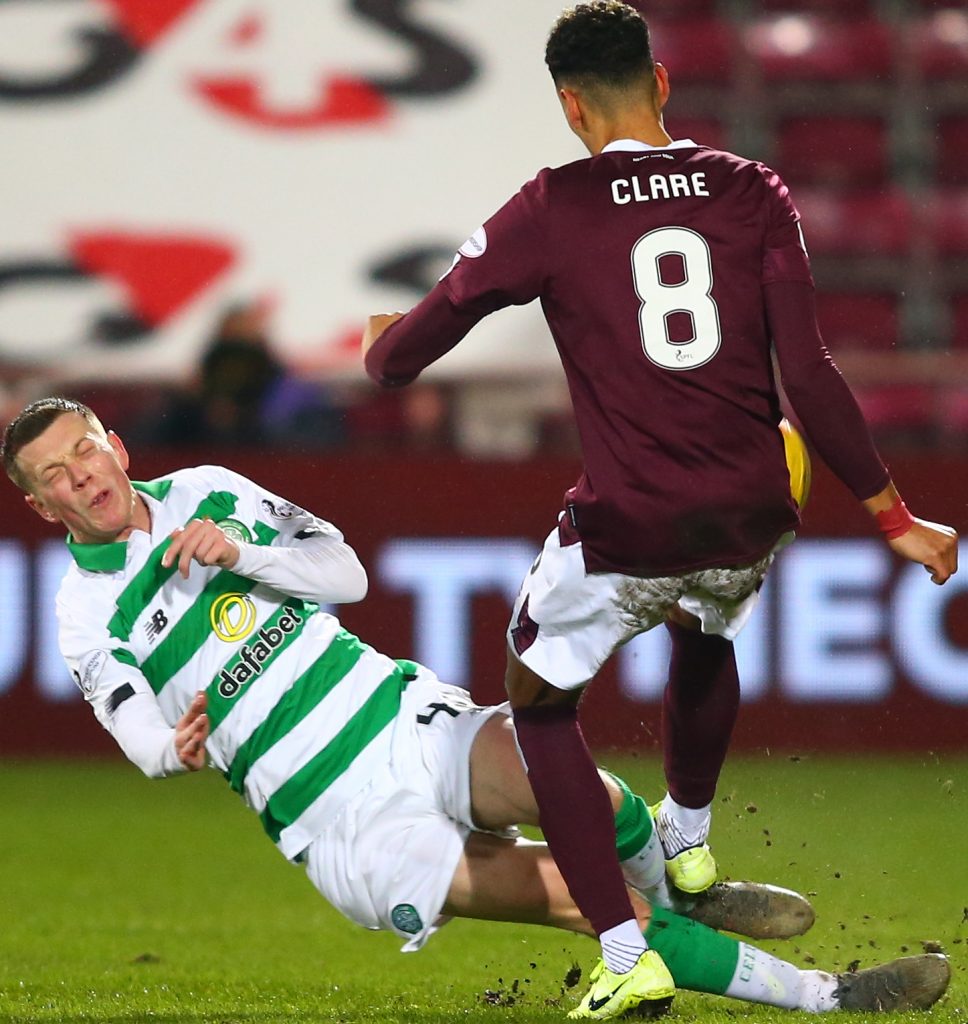 CRASH…Callum McGregor winces as he goes into a tackle with Sean Clare.

New manager Daniel Stendel, in his second game, made some changes and his players responded with a high-tempo outlook against the Parkhead side.

However, Fraser Forster was rarely tested even during their best periods in the opening 45 minutes.

In fact, the Hoops had two excellent chances to score within 60 seconds and scorned both through the unlikely culprits of Edouard and Forrest.

In the 39th minute, the French ace took a heavy first touch as he raced into the box and the keeper was allowed to come off his line and nick the ball off his toe.

And only moments later Forrest was clear inside the box after a neat pass from Ntcham, but missed the target by yards when it looked as though he must bilge the net. 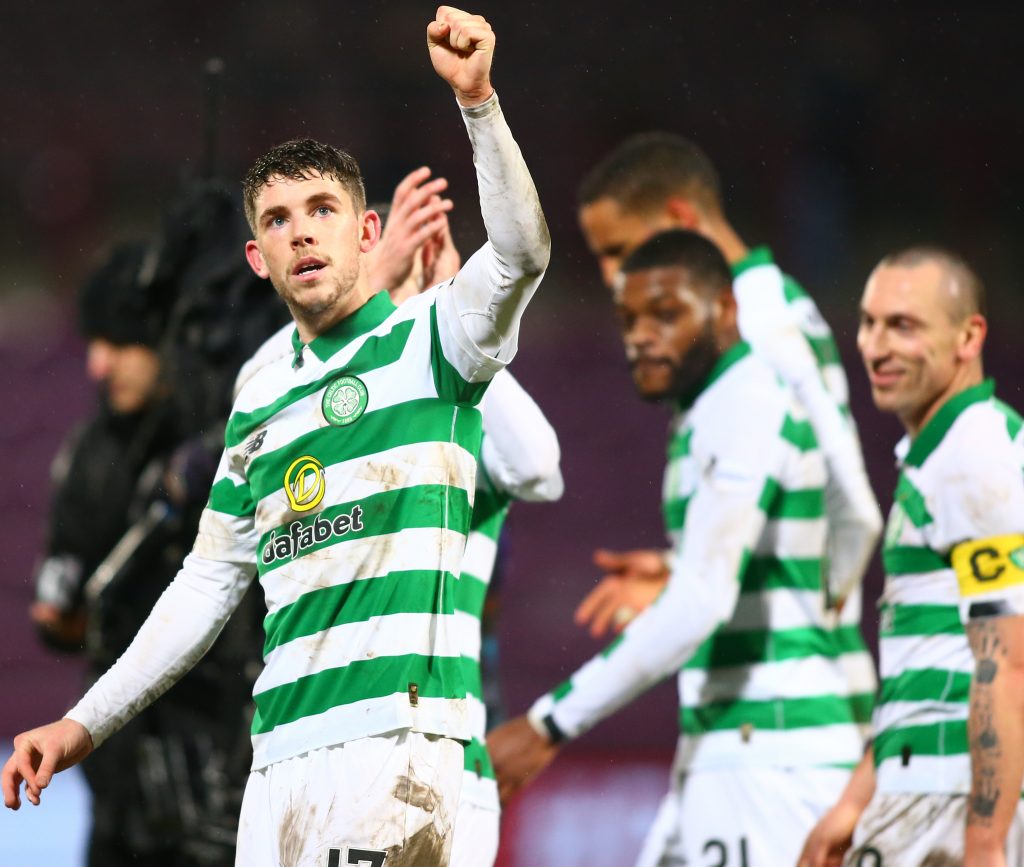 HAPPY DAZE…Ryan Christie salutes the fans at the end of the win with Christopher Jullien, Olivier Ntcham and Scott Brown in attendance.

McGregor had the ball in the net in the 52nd minute, but was just offside and Edouard was out of luck with a six-yard header that smacked off the keeper’s left-hand upright and rebounded to safety four minutes later.

The Hearts goal lived dangerously, but continued to escape as Edouard had an effort saved from a Christie right-wing free-kick and a McGregor shot was blocked.

Seven minutes from the end, Lennon sent on Nir Bitton and Leigh Griffiths for the tiring Forrest and Edouard as he looked ahead to Saturday’s visit of Aberdeen.