Celtic Quick News on News Now
You are at:Home»Match Report»ONE FOR THE ROAD: RANGERS 0 CELTIC 2 (Game two, Sept 1)
By CQN Magazine on 20th May 2020 Match Report

NORMAL service was resumed at Ibrox this afternoon as the champions won to shut up the critics.

A first-half goal from Odsonne Edouard just after the half-hour mark and a deadly finish from substitute Jonny Hayes in stoppage-time made the difference.

At noon in Govan, it was time for the talking to stop and an afternoon for backing up the words. This was an occasion for real men to step up and be counted.

After two false starts at Ibrox last season and admittedly two dismal performances from the nation’s title kings, Scott Brown led his determined squad onto the pitch to underline the qualities of the men from Parkhead who had been deemed by far too many as making up the numbers. 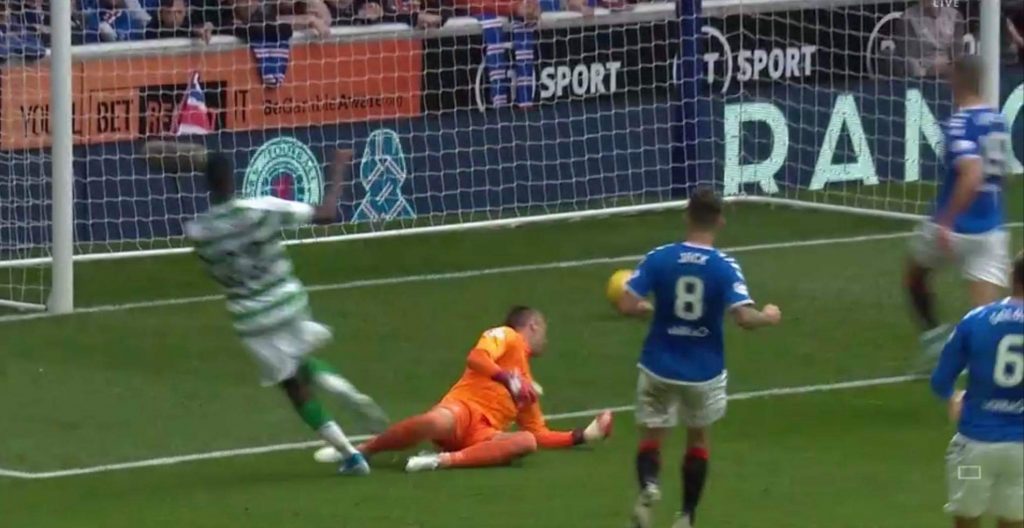 NUMBER ONE…Odsonne Edouard slips in the opener beyond the helpless Allan McGregor.

When the smoke of battle cleared, the Hoops had moved clear at the Premiership pinnacle and had taken their goals tally to a remarkable SEVENTEEN from only four league outings.

In an amazing climax, Jordan Jones was red-carded for a ridiculous challenge on Moritz Bauer to add to Steven Gerrard’s embarrassment and woes.

The breakthrough goal in the 32nd minute was breathtakingly simple in the build-up and the expert execution from Edouard.

Conor Goldson was slack with a ball out of defence and Mikey Johnston snapped onto it in a flash. He composed himself before measuring a perfectly-weighted pass into the tracks of the marauding Frenchman.

Edouard was clearly onside, but his burst of acceleration gave him some breathing space as the home defenders attempted in vain to catch up.

He was almost nonchalant as he took a touch, drew Allan McGregor from his line, sized up the situation and then rolled a right-foot effort under the keeper’s body into the net. 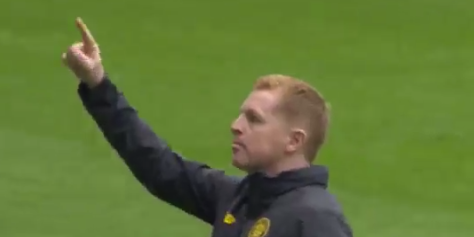 POINT MADE…with three points in the bag. Neil Lennon at the final whistle.

It was no more than the so-called underdogs deserved as they took control of the contest with Neil Lennon’s well up for the challenge.

Inside two minutes, Ryan Christie emphasised the outlook and determination of the visitors when he drifted in from the right, but his 25-yard left-footed effort carried over the crossbar.

Moments later, Johnston forced the first corner-kick of the match after some neat lead-up play from Scott Brown and the busy Boli Bolingoli.

In the ninth minute, there was a moment of alarm when derby day debut Bhoy Hatem Abd Elhamed gave the ball away, but made up for his error with a well-timed tackle on Jermain Defoe as the veteran frontman tried to line up a shot.

The game was played at its usual frantic pace with a lot of fiesty challenges from both sets of players, but referee Bobby Madden kept his cards in his pocket throughout the first-half.

Just before the half-hour mark, the Hoops were awarded a free-kick 25 yards out after a clattering assault by Glen Kamara on Christie.

Edouard stepped up to take it, but, unfortunately, his execution was not up to his usual standard and he sent the ball swirling beyond the upright and into the crowd. 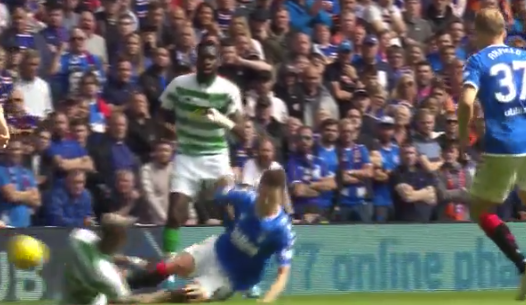 Thankfully, he was a little bit more assured with his accomplished finished shortly afterwards to give the champions the advantage at the interval.

In the 35th minute, Bolingoli was left writhing in pain on the turf after a shocking studs-up attack from Ryan Jack, but no action was taken on the home player and the Belgian recovered after treatment.

Four minutes were added on to the first-half, but Fraser Forster still remained untested as the interval arrived.

And it remained that way mainly in the second period when his only real save was to turn away an angled drive from Sheyi Ojo.

Nir Bitton performed heroics alongside Jullien in the middle of the defence and it was a pity the Israeli couldn’t see out the 90-plus six minutes after a poished performance.

Incredibly, when he came off with what looked like a hamstring injury, Lennon had to throw on Bauer, on loan from Stoke City, to line up in a back four alongside Jullien, Elhamed, who moved inside from right-back, and Bolingoli with all four making their first appearance in the Glasgow derby.

Olivier Ntcham also came on in the 66th minute for James Forrest who had a frustrating afternoon.

And five minutes from the end of the regulation 90, Hayes was introduced for cramp victim Johnston.

It was to prove to be a decisive change. 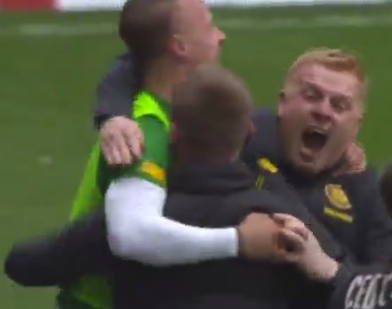 GOVAN GLEE…Neil Lennon celebrates with Damien Duff and Leigh Griffiths at the end.

And it was Hayes who had the final say when he raced onto a neat pass from Ntcham, drew the keeper then saw McGregor make a diving save to his left.

The Republic of Ireland international followed up to fire the rebound into the net.

Before that effort, McGregor had made crucial saves to deny Elhamed, Jullien and Ntcham before he was forced to admit defeat in the fading moments.

As soon as Hayes delivered the perfect answer everyone in the stadium knew it was game over.

The champions had the final say – again.