Celtic Quick News on News Now
You are at:Home»Latest News»‘ONE MASSIVE GAME AFTER ANOTHER,’ KT
By CQN Magazine on 23rd November 2018 Latest News

FIT-AGAIN Kieran Tierney is hoping the match against Hamilton Accies tomorrow is the start of eleven from heaven.

The Hoops left-back, who was forced to withdraw from the Scotland squad before their back-to-back wins over Albania and Israel, is likely to be back in place for the champions as they pursue three more points in their bid for their eighth successive title.

Accies will mark an intense schedule of Premiership games, two Europa League encounters and, of course, the Betfred League Cup Final against Aberdeen at Hampden a week on Sunday.

Brendan Rodgers, searching for his seventh successive domestic honour against the Dons, will need his squad functioning at full strength for the crucial clashes that will take the side to the turn of the year.

The final confrontation of 2018, of course, will be at Ibrox on December 29 and the Irishman will be hoping it will be 13 not out. So far the Celtic gaffer has faced the Govan outfit 12 times and has won 10 and drawn two.

Back on September 2 at a rocking Parkhead, a goal from Olivier Ntcham gave the title kings a 1-0 triumph over Steven Gerrard’s new-look outfit in a match where the home side contrived to hit the woodwork FOUR times.

Looking at tomorrow’s 12.30pm start, Tierney said: “You play, then do your best to recover. It’s not as if there are any easy games, it’s just one massive game after another.

“That’s the pressure you deal with. I’m looking forward to it. I’m not going to hold back, I’ll give 100 per cent every day. You can’t afford to draw games or slip up. It has to be constant. 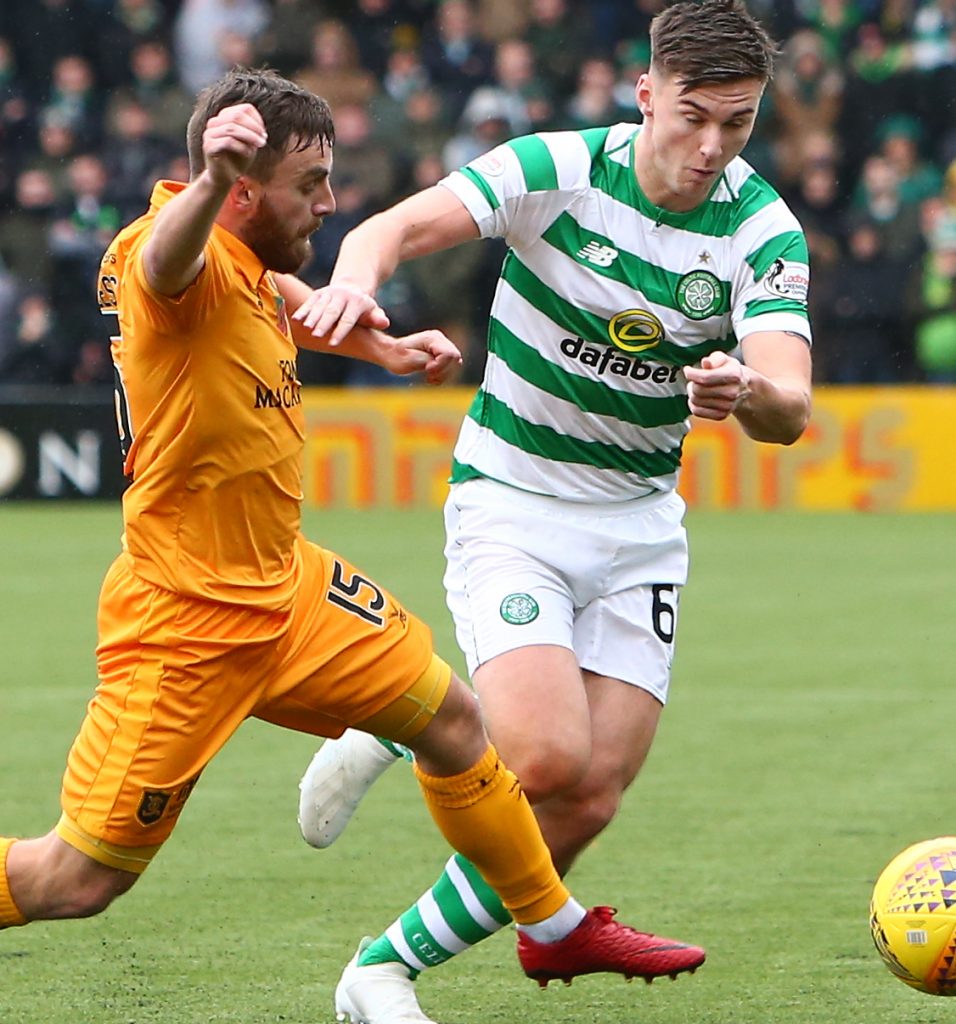 ON THE RUN…Kieran Tierney sweeps past a challenge from Livingston’s Steven Lawlless in the recent goalless draw. Pic: Geo.

“Hamilton is another hard game, as is every game. This will be different from Livingston, even if it’s on a plastic pitch again

“It’s a different team we are coming up against. It’s a challenge we are looking forward to and we are ready for it.”

Talking about his injury, the 21-year-old fans’ favourite added: “I think it was a build up of the overload of all the games so far that caused it. I don’t think the one game on artificial made any difference – but I don’t know.

“I’m available again, so it’s up to the club to decide if I’m fine.

“It was disappointing with Scotland. I was training there, but the hamstring wasn’t the way it should be.

“I said to the management that I was ready to play, but the medical people said I had to go for a scan on it.

“Ultimately, it was their decision, along with Celtic’s. It was out of my hands.”

Now, following his fortnight’s rest, KT will be raring to go at Hamilton tomorrow.