I was shouting at Martin O’Neill through the television last night. With the game at 0-0, Wales’ Joe Allen was off getting treatment, which lasted several minutes before he was eventually replaced. Ireland had a man advantage, but still refused to press Wales, who were able to comfortably pass the ball around the back.

Ireland needed a victory, they had a brief window where they would enjoy the advantage, but they chose to defend instead. Then I remembered the game against Barcelona in March 2004. For much of the game Celtic enjoyed a 10-9 men advantage, but it didn’t look that way. We defended our territory and ventured up field only when a mistake or long clearance permitted.

We won that game, the first leg of a knockout tie, 1-0, but there were grumbles among the support in the days thereafter. “We should have gone for them, 1-0 will not be enough.”

Martin gambled successfully against Barcelona as he did last night. There was probably an acknowledgement on both occasions of the comparative limitations of his players, so his game plan was easily understood and scrupulously followed.

He could have urged his players to press forward for the period Allen was getting treatment, but that would have been counter to his simple message. Permitting such off-the-cuff decision-making would have been a fatal mistake.

Teams in possession are more likely to make bad passes in their defensive area than teams who have been drilled to get the ball as far away from their defensive area as possible. You don’t need to like this type of football (I don’t), but Ireland are in the World Cup play-offs when countries with more talented players are out of the competition, including Scotland and Wales.

You wouldn’t want to watch this football at Celtic today. Even back in his Parkhead heyday, Martin received complaints about his team’s robust, target-man, playing style. Ireland are simultaneously an echo of a bygone era and a lesson in winning against better-resourced opponents. I would take it for international football, or even for Champions League group stage, but it would shut the stands at Celtic Park if we tried it domestically.

Celtic wore commemorative shirts against Hibs to mark National Famine Memorial Day. One million people died in Ireland’s Great Hunger in the years of famine, from 1846-50. Millions more left the country, some of whom arrived in Glasgow, and formed the communities which founded Celtic 40 years later. 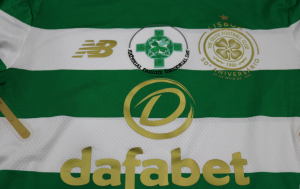 One million people dying of starvation in what was then part of the United Kingdom is an unimaginable horror. Scotland was also affected by the Blight, although to a lesser extent.

James Forrest’s shirt from the game against Hibs is available for raffle to aid the Celtic FC Foundation’s work (James will sign the shirt). Your Foundation carries on the mission that gave birth to Celtic 130 years ago. It feeds the poor in Scotland, Ireland in London and across the globe, but it also works with many disadvantaged groups of children and adults.

The Foundation is core to our mission as a football club. You can enter the raffle by making a minimum £5 donation on this MyDonate page and answering this question:

Which PSG player was booked for diving against Celtic last month?

Please forward your donation confirmation with the diving player’s name in the SUBJECT line to celticquicknews@gmail.com The raffle will close on Monday. 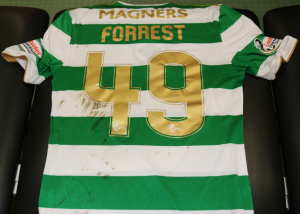