CELTIC have fired two blanks since Neil Lennon took over as interim manager in February.

However, as Lennon’s attention shifts to the national competition at Hampden and another confrontation with Derek McInnes’ outfit, he admitted he was not too downhearted at the failure to break down the Livi barrier after making so many opportunities against visitors who defended in depth from the first whistle.

The afternoon of frustration was summed up in the fading moments when keeper Liam Kelly, who had been his side’s outstanding performer, fumbled a low drive from Odsonne Edouard and substitute Oliver Burke looked poised to fire in the winner. 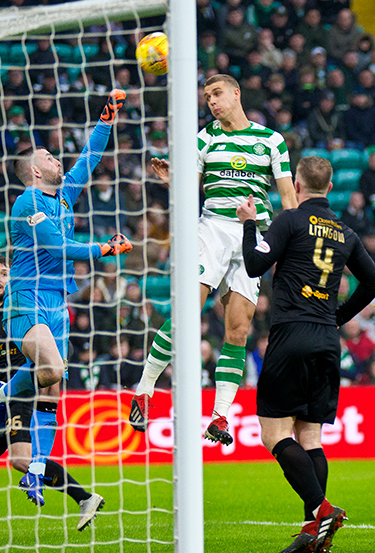 Remarkably, the on-loan West Brom attacker belted the ball wide of the target when he should have scored from close-range.

However, Lennon, speaking exclusively in this week’s Celtic View, said: “We’re in such a good position to win another title and while I’m disappointed with a draw against Livingston, particularly having created so many chances, we’re still another point closer to wrapping it up.

“We’re now 11 points clear at the top of the table with five games to play. We’re now on course to win it after the split and I’m happy enough with that.

“Winning it is, above all, the most important thing from here, but we put that on hold for now and focus on Sunday’s Cup semi-final with Aberdeen.”

The Irishman added: “It’s been a hard week for the players, both on and off the pitch, and they’ve dealt with everything brilliantly, as usual.

“To that end, it’ll be good to have a week to prepare for the Aberdeen game. As I say, we’re still in a great position, we’re 11 points clear and we know what we have to do.

“I think there’s a lot to be happy about.”