CELTIC midfielder Matt O’Riley picked up where he left off last season by sauntering through the 2-2 draw against Blackburn Rovers at Parkhead yesterday.

The elegant playmaker performed for 72 minutes before being replaced by James McCarthy as manager Ange Postecoglou utilised his player pool in preparation for the competitive action kicking off a fortnight today with the Premiership opener against Aberdeen on Flag Day.

The English Championship side didn’t hold back during the 90 minutes of the so-called friendly and referee Kevin Clancy who had looked the other way for the first half-hour was forced to book Sam Gallagher for a late challenge on Stephen Welsh.

Three others from the visitors were also yellow-carded along with Mikey Johnston and McCarthy, the Hoops stars cautioned in the fading moments. 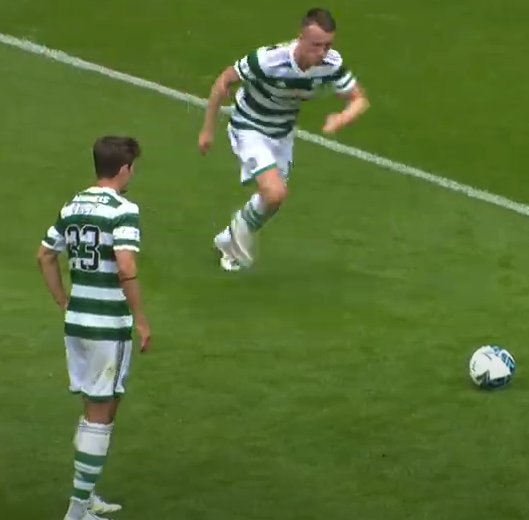 WATCHING BRIEF…Matt O’Riley looks on as David Turnbull prepares to flash in a free-kick for Celtic’s second goal against Blackburn Rovers.

Anthony Ralston, who had come on for Josip Juranovic at the interval, hirpled off near the end after another rash challenge from an opponent, this time former Aberdeen forward Ryan Hedges.

Osaze Urhoghide came on as the game ticked down and the Scotland international right-back was led off in obvious distress. He later needed stitches inserted in the wound.

Speaking about the rugged opponents, O’Riley didn’t hold back as he said: “They were feisty, a bit nasty and left a few on a few of us.

“Tony’s boot was split in half, which says enough, but it was competitive and it’s what we want.

“We have to handle it because we’ll come up against teams in the Scottish Prem who’ll try to kick us to try to stop us.

“But if we’re on it with the counter press and crisp on the ball the rest will take care of itself.”

Postecoglou’s champions recovered from the loss of a goal in 20 seconds when Gallagher left Joe Hart helpless, but the game turned around before half-time with Filipe Jota and David Turnbull scoring.

The Ewood Park side gained a draw 15 minutes from time when Brereton Diaz, the Chilean international who is a £10million target for Sevilla, left substitute keeper Benji Siegrist stranded with a cute free-kick from just outside the box. 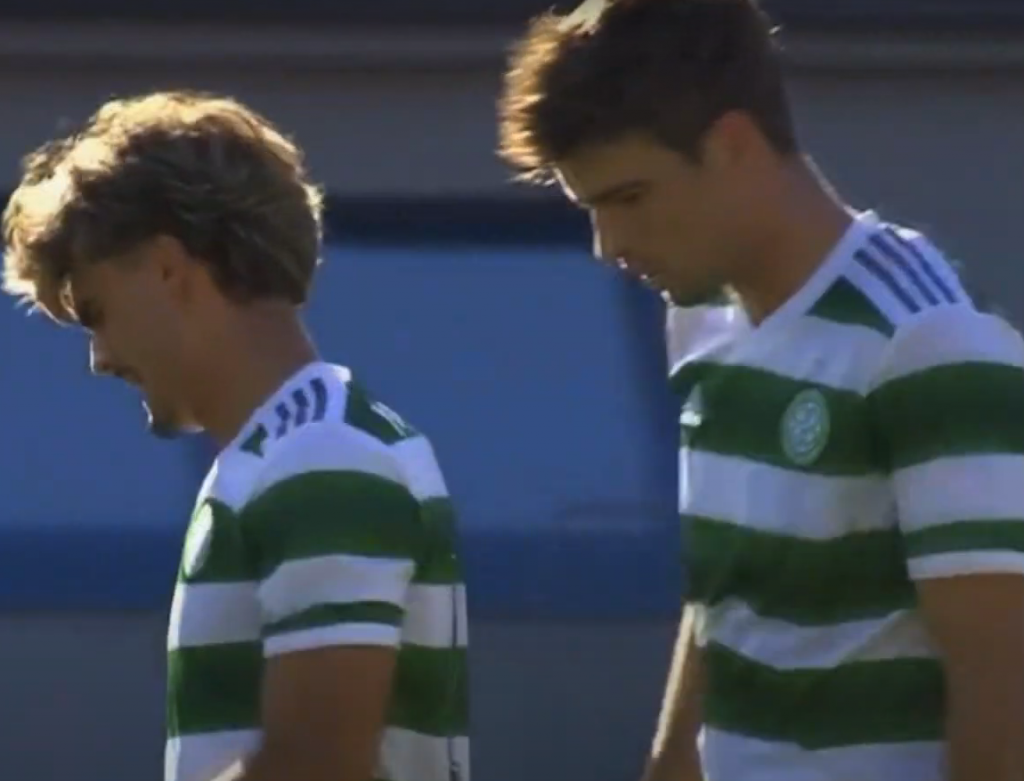 IT TAKES TWO…Filipe Jota and Matt O’Riley gear up for the new season.

Jota, who had also come in for a bit of a battering from uncompromising rivals, impressed Postecoglou overall, but there was a real piece of blinding skill which provoked a spotaneous burst of applause from the appreciative audience when he nonchalantly lobbed the ball over a defender and brought it down all in one motion.

A certain Jimmy Johnstone would have enjoyed that moment.

O’Riley, speaking to the Scottish Sun on Sunday, added: “He’s not bad is he? He’s a great guy which is the most important thing.

“But on the pitch he’s good to watch. I think everyone enjoyed the piece of skill.

“He said it’s the first time he’s tried it in a game.”