TEARS mixed with cheers as stalwarts Tom Rogic and Nir Bitton bade farwell to Celtic at the weekend.

The Australian playmaker and the versatile Israeli brought down the curtain on their multi award-winning careers during the 6-0 romp over Motherwell at sunkissed Parkhead on Saturday.

The one-sided triumph brought Ange Postecoglou his first title in charge of the Hoops and the club’s tenth in 11 years.

Rogic, 29, and thirty-year-old Bitton played their roles in bringing those championship crowns to the east end of Glasgow and the 60,000 fans in the stadium gave them a rousing and emotional send-off. 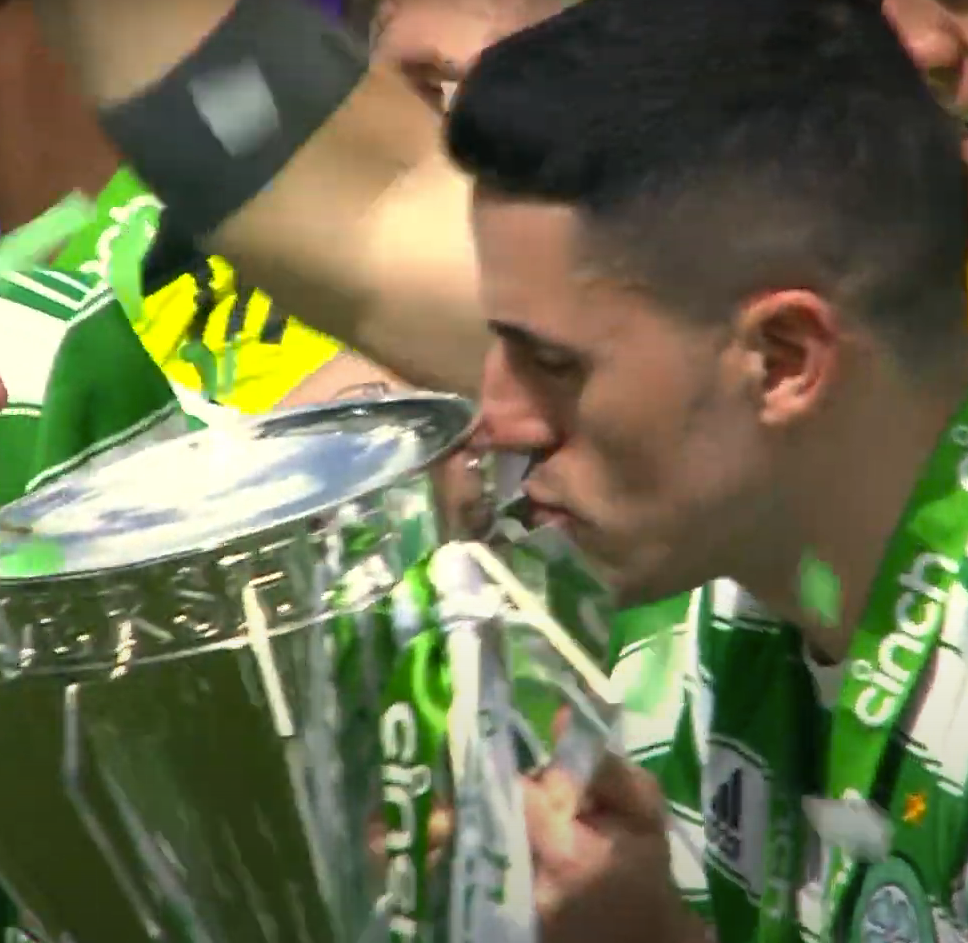 WHAT A SMACKER…Tom Rogic plants a kiss on the Premiership silverware. 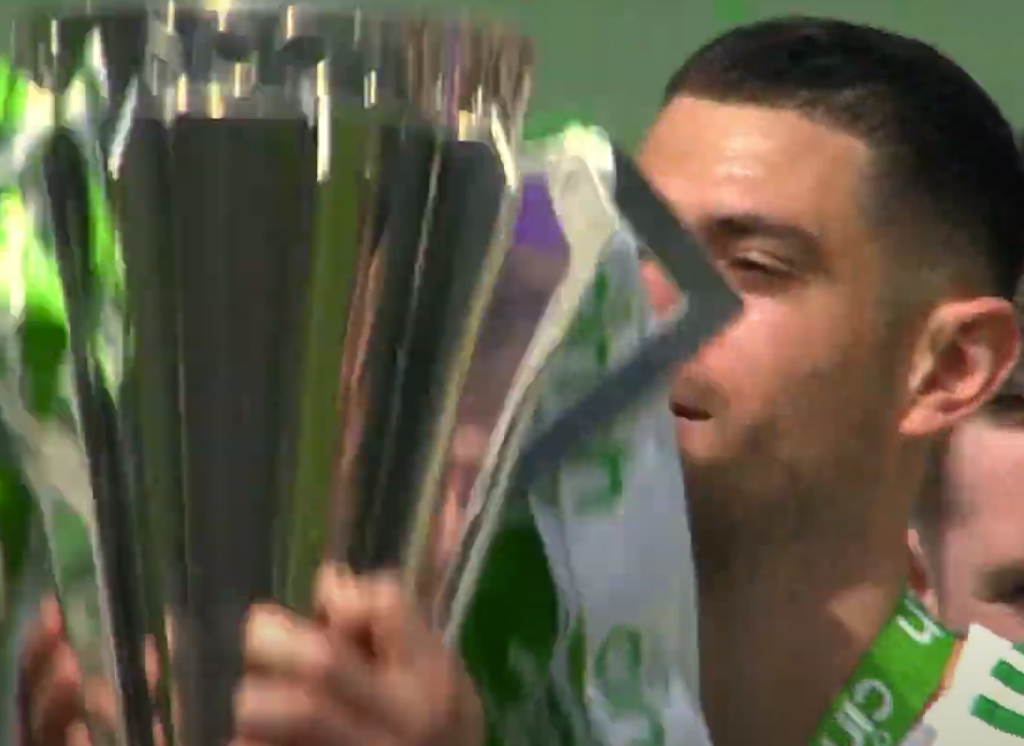 SILVERWARE FAREWELL…Nir Bitton looks a little teary-eyed as he holds the trophy.

The stylish midfielder started the game before being withdrawn in the 62nd minute while the 39 times-capped Israeli international came on for Callum McGregor in the 85th minute and accepted the captain’s armband at the same time.

Rogic, who adorned the No.18 shirt, was even afforded a special moment when the supporters gave him a standing ovation in the 18th minute with the place rocking to the rafters.

Ironically, Bitton’s last act in the famous green-and-white hooped shirt was to congratulate Giorgos Giakoumakis on scoring the sixth and final goal with the final kick of the ball.

Now boss Postecoglou will delve into the transfer market for the third time since his June arrival for replacements to key squad members during their lengthy periods in Glasgow. The departing double-act, in the meantime, will look to their future as they continue their careers. 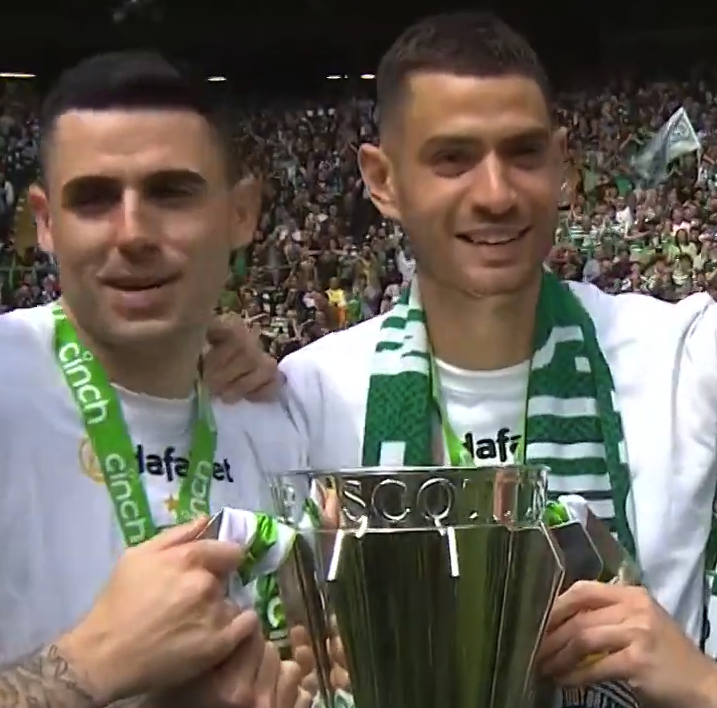 TWO OF A KIND…Tom Rogic and Nir Bitton with Celtic’s tenth title in 11 years.

ROGIC, who spent nine and a half years at the club, said: “This title is right up there. Celtic means everything to me. I’m lucky to have had these moments.

“I will be a fan from now on and I wish the club every success for the future.

“To get that kind of goodbye was an amazing memory I’ll have forever.

“I feel fortunate to get that from the fans and it made the day so special.

“I heard the crowd in the 18th minute and it was hard to focus on the football with so much running through my mind.

“It was a tremendous day for the team and we got a great result. 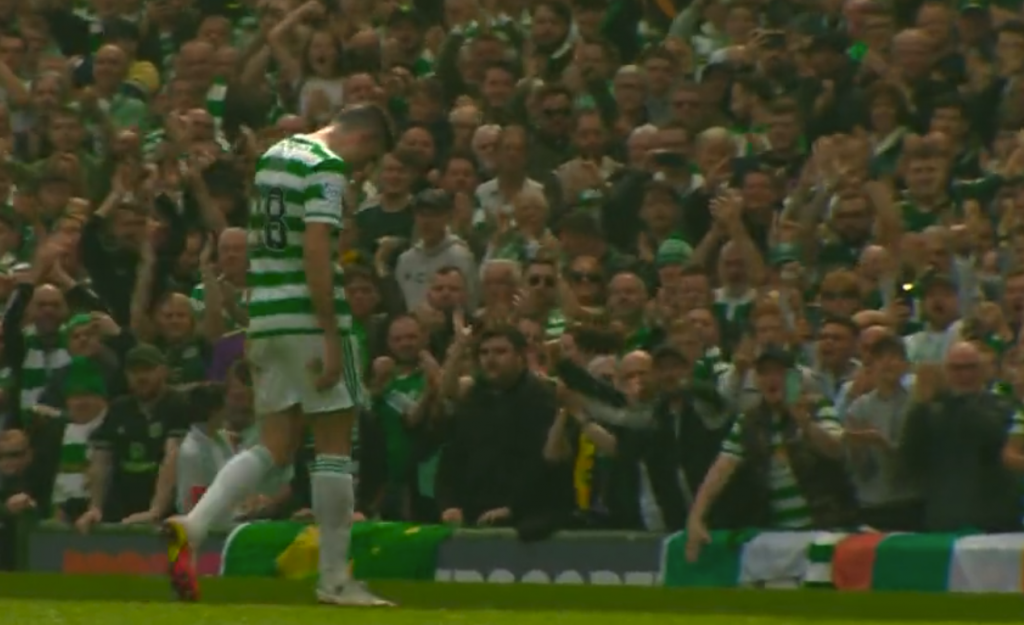 GOODBYE TO PARADISE…Tom Rogic bows his head as he walks off after his final appearance. 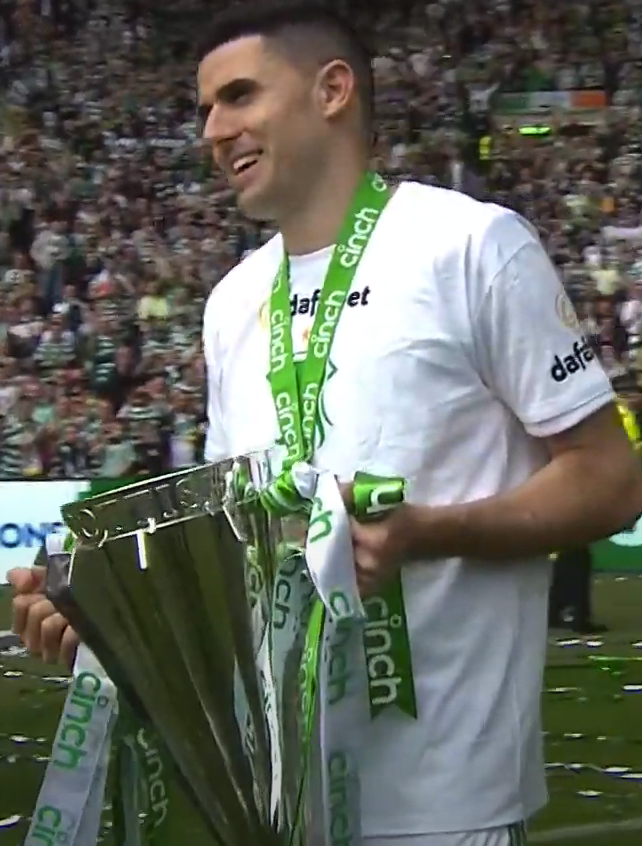 PRIZE GUY…Tom Rogic is all smiles as he holds the newly-won silverware.

“I had my brother and his wife over from Australia and my wife and baby girl were there, as well.

“It was a really special moment for me and it’s one I will carry with me for a long time.”

Asked about his next move, Rogic, speaking to Australia’s Network 10, added: “I’m not sure yet. Now isn’t really the right time – I’ll just reflect on the career I’ve had here.

“I’m ready for a new challenge and a change of scene is something that will motivate me.

“I’ll sit down with my agent in the coming weeks and discuss my options.

“Right now it’s just about what a great time I’ve had here and enjoying my last couple of days.” 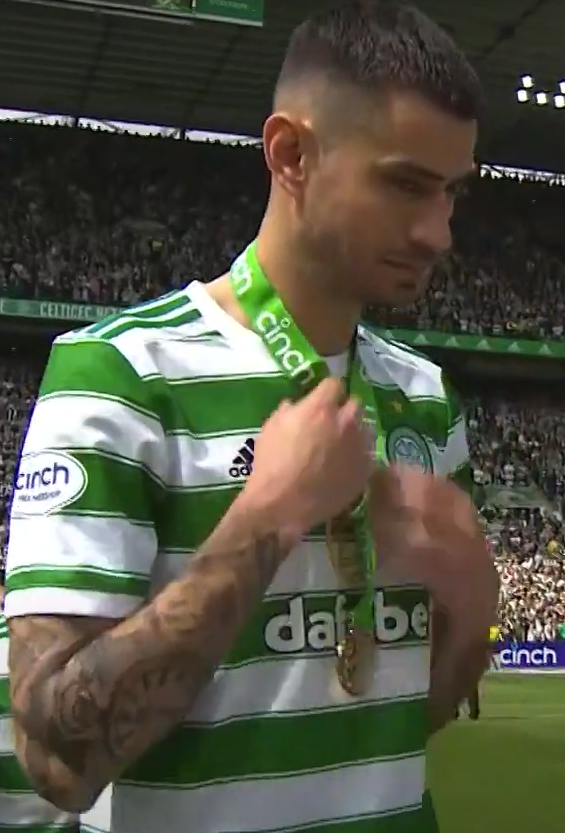 TITLE REWARD…Nir Bitton with his eighth league medal after a glittering career at Celtic.

BITTON, who was also signed by Neil Lennon, arrived in a £750,000 deal from FC Ashdod in August 2013 and stressed he is still looking to his eight titles he won at Celtic.

The central defender/midfielder remains ambitious and said: “I do not feel full, I think my hunger only grows with time.

“I want to play in a club that takes championships and fights for titles, of course. I have a lot more to contribute. 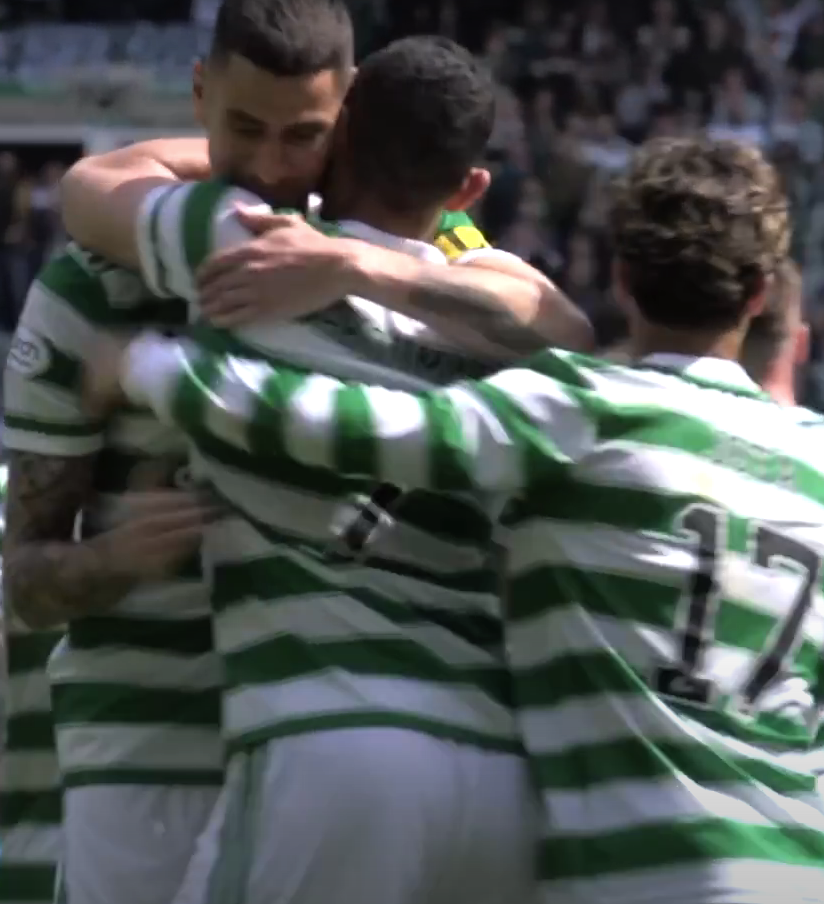 LAST HURRAH…Nir Bitton congratulates Giorgos Giakoumakis after the striker’s final strike in the six-goal rout of Motherwell. Filipe Jota is in attendance.

“The desire right now is to continue my European career overseas, but I do not rule anything out, we will take the summer and make a decision together.”

Bitton, speaking to Israeli sports media outlet Mako, added: “I was always taught to listen to offers and not say no.

“I’m now a free agent and I do not know how it feels, we will see what the plans are with the wife and children and we will make the best decision for all of us.”