BRENDAN RODGERS stunned the Celtic fans with his swift exit this morning to quit the champions and agree a three-year deal with Leicester City.

But, as the day’s astonishing turn of events settled, he took the opportunity to thank the Hoops followers for their support during his 33-month stint at Parkhead.

Rodgers, who won back-to-back clean sweeps and was on the brink of a historic treble, said it had been “a real honour” to work for the club he had supported growing up in Northern Ireland.

In a statement on the Celtic website, Rodgers said: “It has been a real honour to serve the club and its supporters across the past three seasons. 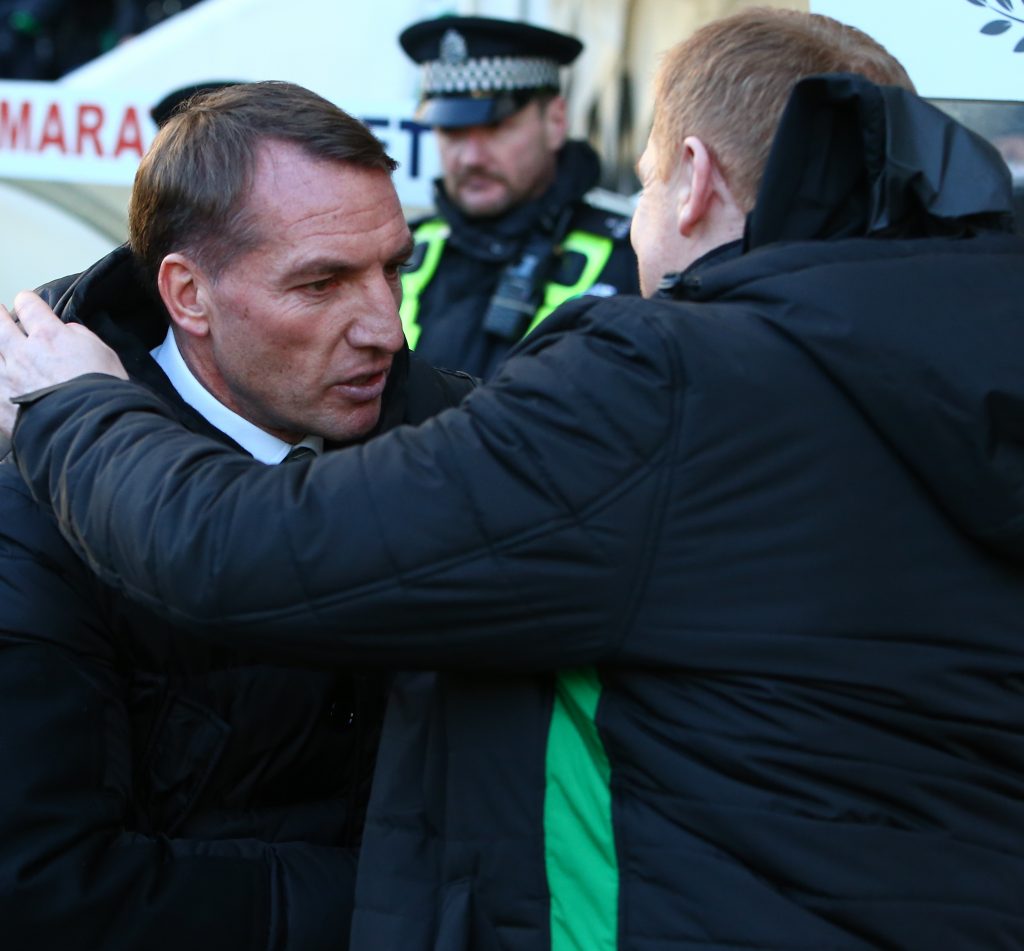 RODGERS v LENNON…Brendan, as boss of Celtic, against Hibs gaffer Neil in December.

“I have been a Celtic supporter all my life and the reason I came to Glasgow was to work for the club I had such love and affection for.

“From the moment I walked into Celtic Park, I have been living my dream and, together with the players, staff and supporters, we have been on an amazing journey, which I will never forget.

“To be welcomed in the way I was on my first day at Celtic Park is something I will always treasure. From that day I have given my all to the role of Celtic manager. I would like to sincerely thank the Board at Celtic for giving me the opportunity to manage Celtic in the first place and for the support they have given me throughout my time as manager.

“It has been an absolute pleasure to work with Peter, Ian, Dermot and the rest of the Celtic Board and together we have done everything we could to bring success to our supporters.

“I want to make a special mention to the Celtic players. They were an absolute pleasure to work with and I want to thank them all for the commitment and positivity they gave to my coaching philosophy each and every day.

“Every one of them will be a friend for life.

SINGING IN THE REIGN,,,Brendan Rodgers with his first Scottish Cup in 2017.

“Celtic is in great hands for the future and I am sure the club is in a wonderful position to continue to dominate Scottish football and do well in Europe, I know that will be the aim of everyone at the club.

“Celtic will always be my club and I wish everyone connected to Celtic – the Board of Directors, the staff and, of course, the Celtic supporters – every success in the future.”

Rodgers amazed football this morning when he quit the champions to have talks with the Premier League outfit who made their move for the Irishman after sacking Claude Puel at the weekend following a 4-1 loss at home against Crystal Palace.

The former gaffer told the players yesterday of his intentions before today’s incredible happenings unfolded.

Rodgers was in the stand this evening to watch his new team against Brighton while the Hoops face a crucial Premiership encounter against Hearts at Tynecastle tomorrow night with Neil Lennon in the dug-out,

The holders will then take on Hibs at Easter Road in the Scottish Cup quarter-final on Saturday night with Rodgers in the Leicester dug-out when the Midlands outfit play Watford at the weekend.

Click Here for Comments >
Share. Twitter Facebook Google+ Pinterest LinkedIn Tumblr Email
Previous ArticleIN: LENNON ADMITS ‘PRIDE’ AND ‘PRIVILEGE’
Next Article BRENDAN RODGERS: ‘IT’S NOT THE PUNCHES TO THE HEAD OR THE BODY THAT STOP YOU, IT’S THE PATS ON THE BACK’