TOM ROGIC has received an apology from Australian international boss Graham Arnold for forcing him to pull out of the game at Ibrox on Saturday.

Celtic have finally admitted defeat in their bid to hold onto the midfielder for the final match of 2018 against Steven Gerrard’s side.

Rogic made a personal plea to his former Central Coast Mariners mentor to be released before joining the Aussie squad for their opening Asian Cup game with Jordan on January 6.

Arnold, however, is determined to have a full squad for his nation’s last warm-up game against Oman on December 30 and has insisted the playmaker makes the trip.

The Head Coach said: “Tommy would love nothing more than to stay and play for Celtic against Rangers.

“I want a great relationship with Celtic and Brendan Rodgers. I want the same with Neil Lennon at Hibs, but we are the current holders of the Asian Cup. 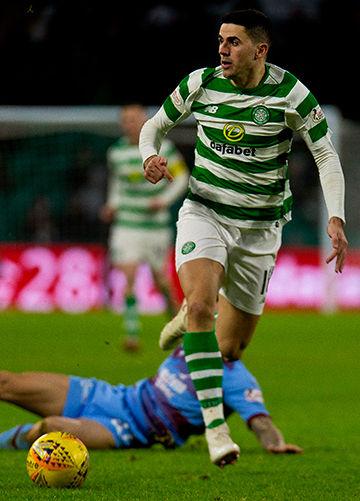 ON THE RUN…Tom Rogic taces away from a grounded Dundee defender in the 3-0 win on Saturday.

“I’ve only been on the training pitch with the players for 18 days since taking the job and we have a friendly on the 30th and that’s a huge preparation for us.”

Ex-Hoops gaffer Lennon will lose three players for the Edinburgh derby at the weekend with Martin Boyle, Mark Milligan and Jamie Maclaren all called up.

On Friday, Rodgers got in touch with the Australian FA to be “sensible” over the Rogic situation, but now admits the midfielder will leave for the Middle East on Wednesday night.

The Irishman said: “He will be away after the Aberdeen game which is a shame because he wanted to play at Rangers.”

Arnold added: “Listen, I love Tommy and Celtic and it’s an awkward situation. But if I let him play against Rangers and do it for one, then, of course, Neil Lennon is going to be on to me saying: ‘What about my three?’.

“Then I’ll have Chris Hughton on from Brighton about Matty Ryan. Then I’ve got Jackson Irvine at Hull City, then I’ve got some boys here in the A-League and all of a sudden I’ve got 11 or 12.

“I am not trying to be the bad guy here. The FIFA rules state the boys were supposed to join us on December 24.

“I let them stay on the 26th, so the clubs are not losing key players for one game. They have actually gained them for one game on the 26th and looking at the league table it seems to me that’s Celtic’s biggest game.

“I would love nothing more than for Tommy to play against Rangers, but I didn’t set the schedule with two huge derbies in Scotland on the 29th.

“Tommy is one of Celtic’s best players, but he is also Australia’s best player and I am coaching my country.”