Celtic Quick News on News Now
You are at:Home»Football Matters»PALACE OFFER FALLS SHORT FOR HOOPS TARGET
By CQN Magazine on 9th October 2015 Football Matters
IRISH wonderkid Matthew Shevlin, who has been watched by Celtic, could be lured to Crystal Palace.
The Ballymena striker has impressed the London side’s boss Alan Pardew during a week’s trial.
And the Selhurst Park outfit have already had their opening offer – believed to be around £60,000 – for the 16-year-old goalscorer knocked back by the chairman of the semi-professional Irish side.
John Taggart said: “It was a lower bid than we were expecting, particularly from a Premier League Club, and it has been rejected.

“Crystal Palace had suggested they were keen to get a deal tied up fairly quickly, but their offer wasn’t really one we would entertain.

“Hopefully, they will have another think and come back with an improved offer – I would be disappointed if they didn’t.

”We don’t want the young lad to be held back, but, at the same time, we have to look after the interests of Ballymena United and try to get a deal which will give us a platform to take the club forward.
“But central to everything is that it has to be a deal that suits Matthew – we wouldn’t send him to anywhere that he didn’t want to go. 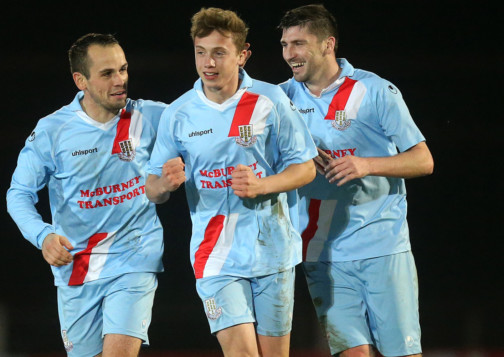 “We’ve had a number of clubs wanting to see Matthew in action, so, hopefully, something will happen for the lad.”

Shevlin has already represented Northern Ireland’s Under-17 team and Ronny Deila has received rave reports about the pacy teenager.
The SPFL champions have already raided the Irish market this year when they signed winger Michael Duffy for £100,000 from Derry City on the last day of the January transfer window.
He joined Alloa on a six-moth loan deal at the start of the season.
If Celtic are prepared to offer a similar figure then Shevlin could be Glasgow bound.
Click Here for Comments >
Share. Twitter Facebook Google+ Pinterest LinkedIn Tumblr Email
Previous ArticleWHY I’VE STRUGGLED, ‘ JOHANSEN
Next Article CELTIC’S LEKE BILL