COMEBACK Bhoy Leigh Griffiths and Callum McGregor struck to make sure Celtic, who have won the competition for the past three seasons, will be in tomorrow night’s Scottish Cup draw.

The Hoops had to overcome a determined and stubborn Partick Thistle tonight to make sure there were no banana skins at Firhill – despite a stoppage-time penalty-kick goal for the hosts – with a crowd of 9,547 looking on.

The players will be happy to get back into their stride following the mid-winter break and notched up their THIRTY-SECOND victory in a domestic Cup-tie with 98 goals scored in the process with only 12 conceded.

Inside two minutes, a neat, sweeping involving Olivier Ntcham and Tom Rogic set up Callum McGregor to fire over a cross from the left to the lurking Griffiths, but his elevation was out and the ball carried harmlessly over the touchline.

Next up, Odsonne Edouard had a header from 12 yards that was clawed by from under the bar by the alert Scott Fox.

Ntcham then tried his luck from range, but it was wayward and didn’t trouble the home goal.

Neil Lennon was forced to make an early substitution as Nir Bitton limped off after injuring his right thigh in a challenge and Jozo Simunovic came on for his first appearance since September.

Rogic, set up by Edouard, flashed one wide of Fox’s left-hand post with the Jags No.1 well beaten. The Aussie international playmaker was obviously keen to make an impact in only his seventh start of the campaign that has been dogged by injury. 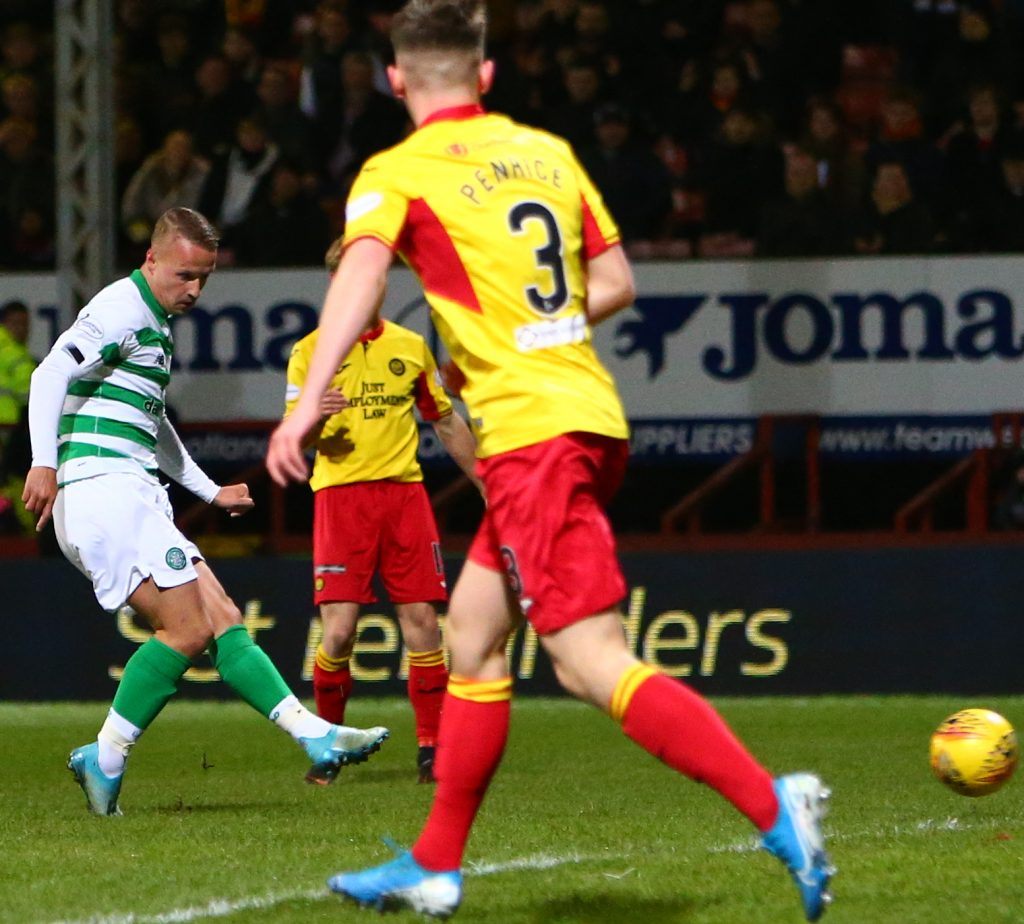 And Fox was sprawling again, this time to his right, as he got down to hold a low drive from Edouard after some neat lead-up play from Jeremie Frimpong and Ntcham.

Griffiths, showing old-time sharpness, hit the breakthrough goal in the 12th minute. The Scotland international, who last scored in the 5-2 win over Motherwell on September 10, pounced on a rebound from defender James Penrice in the box to show the customary finishing skills that have brought him over 100 goals in his Hoops career.

He didn’t hesitate as he drilled the ball left-footed low past Fox at his left. There was no disguising the frontman’s relief as the ball nestled in the back of the net.

In 14 minutes, Rogic mishit a shot straight at the grateful Fox with Griffiths in a better position to accept a pass. 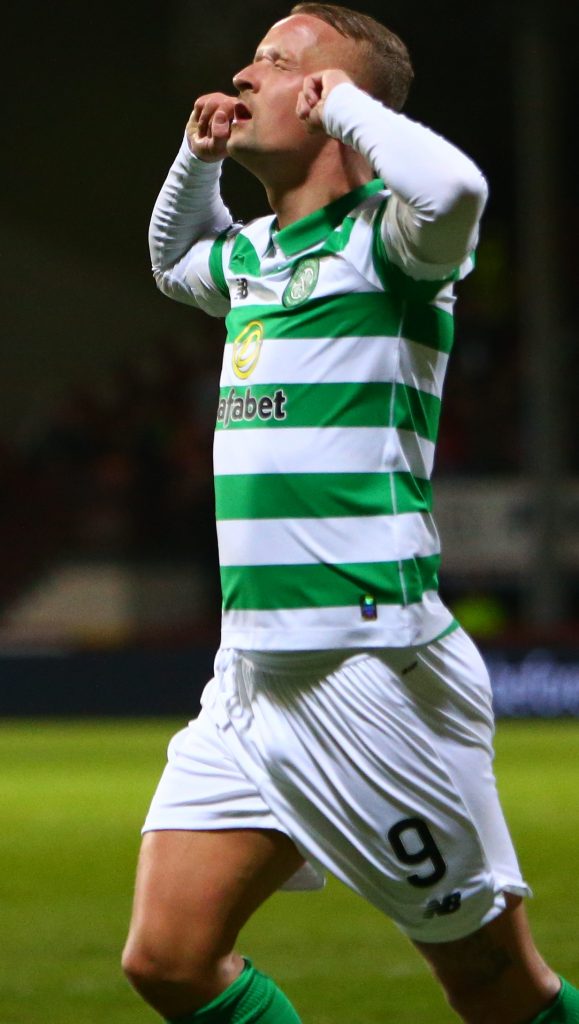 HAPPY NEW EAR…Griffiths races away after hitting the opener.

The Jags escaped again when Griffiths swung in a left-wing corner-kick and Christopher Jullien rose high to bullet the ball over the bar.

In 29 minutes, Griffiths got his head to a high swinging cross from the right by Frimpong, but his accuracy was just out and Fox was right in line to grab the effort.

Fraser Forster was a virtual spectator throughout the first-half, but there was a flash of veteran hitman Kenny Miller to remind the visitors’ defence he was around and desperate to score against his former team.

Mainly, though, the holders were forcing play with Frimpong and Greg Taylor eager to surge forward on the flanks and Ntcham and Rogic were busy in the engine room.

Celtic were denied what looked like a clear penalty in the 42nd minute when referee Alan Muir decided to look the other way after left-back Penrice clearly pushed Frimpong to the ground.

The Jags man was beaten for pace by the pacy Dutchman and automatically threw out an arm to knock the Hoops star out of his stride. He hit the deck and then looked totally astonished as the match official waved play on. 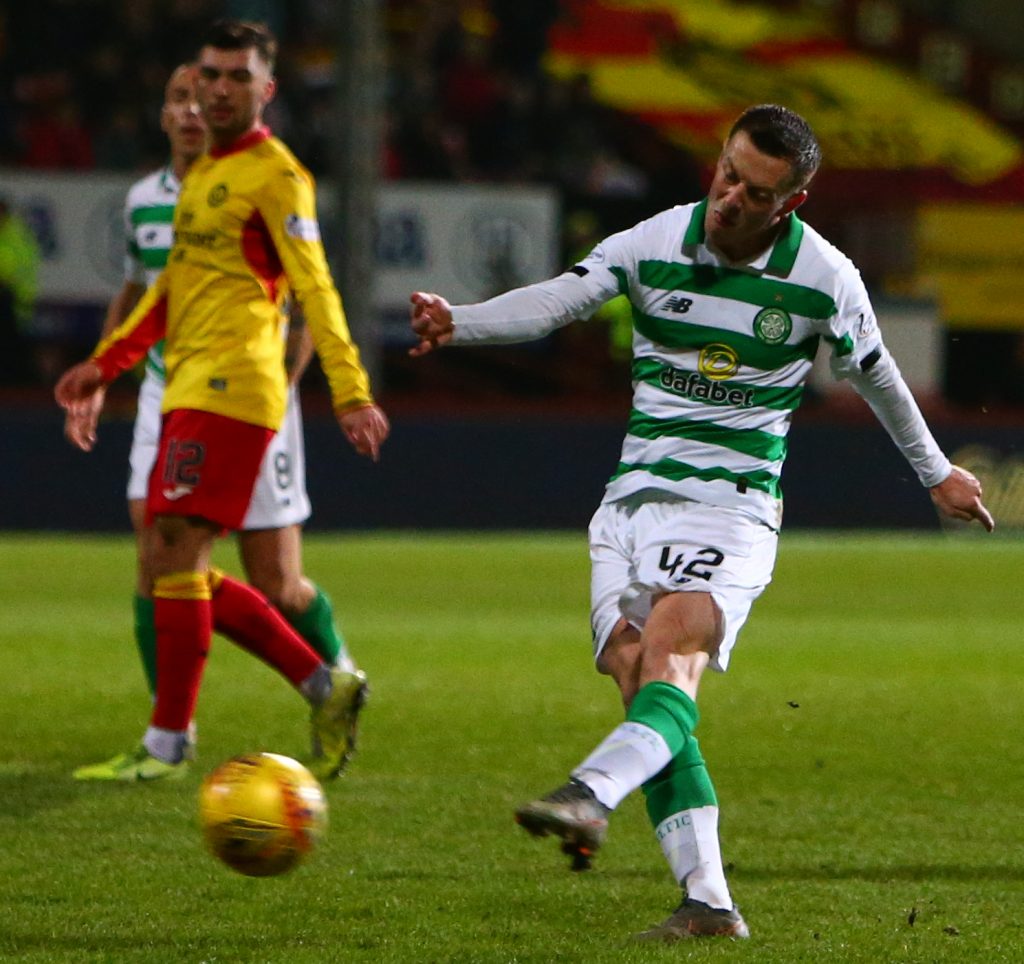 BY THE LEFT…Callum McGregor fires in the second goal.

The Hoops were still looking a bit aggrieved when Scott Brown and Simunovic had a communication failure on the left-flank and the ball ricocheted off the skipper into the tracks on the unguarded Zak Rudden and he raced menacingly towards Forster.

He slammed the ball across the face of the goal and Miller, getting in on the blindside at the far post, stretched to get his left foot to the ball, but, amazingly, he scooped his effort onto the upright and it was scrambled clear.

It would have been bizarre if the Maryhill outfit had gone in at level-pegging with the champions after spending most of the opening 45 minutes on the backfoot.

The Hoops started positively after the interval and Edouard didn’t read Brown’s intentions as the midfielder knocked the ball forward and the chance was lost.

In the 50th minute, Jullien sizzled in a low header from a Griffiths left-wing corner-kick, but Fox was quick to get down at his post to beat the ball away.

A few moments later, there was a round of applause for Rogic after some scintillating skills that bewildered an opponent as he ghosted past him. It was vintage Rogic and augered well for 2020.

In the 57th minute, it was Rogic again in the spotlight with some neat footwork outside the box, but his finishing effort lacked technique and precision and edged wide without unduly worrying Fox.

After the hour mark, Frimpong, racing clear into the box again, tried to set up Edouard, but, unusually, the Frenchman’s control let him down and the ball was cleared.

It was McGregor’s turn to have an attempt when he let fly from 20 yards, but it whipped past the keeper’s right-hand upright.

In the 65th minute, Griffiths was injured as he landed awkwardly after challenging for a high ball. He had treatment to his left ankle from Tim Williamson before resuming.

For all their dominance, Celtic were making heavy weather in putting this Cup-tie to bed. In the 79th minute, though, only a fabulous fingertip save from Fox denied a brilliant drive from Edouard. 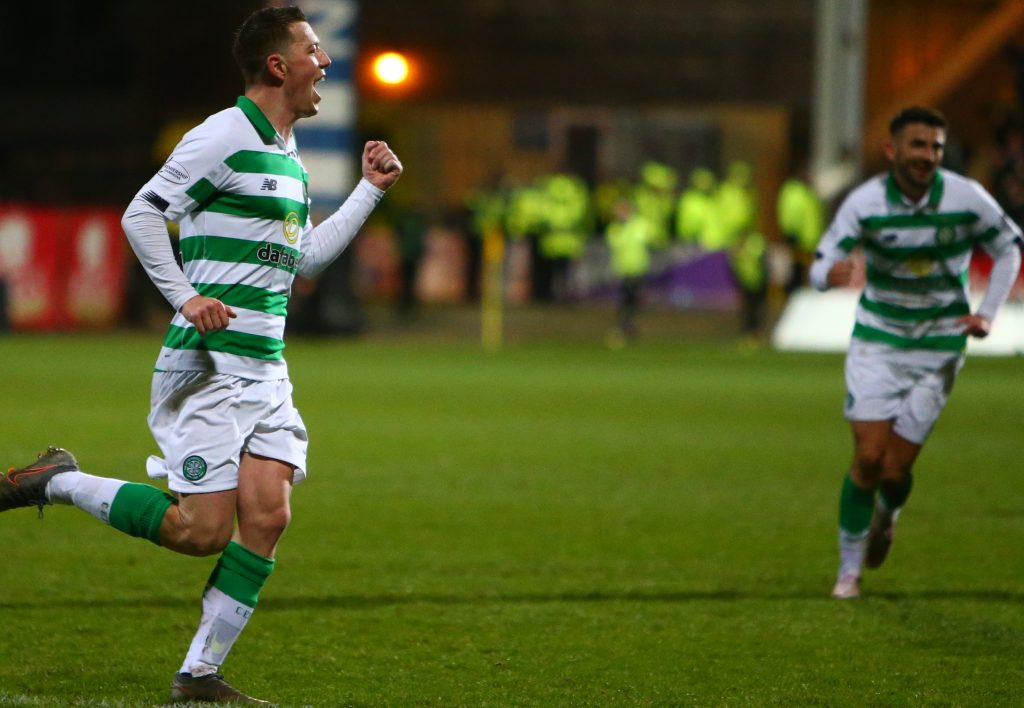 CUP THAT CHEERS…McGregor takes the applause as Greg Taylor is about to join in the celebrations.

However, the second goal from McGregor came only moments later when Thistle failed to clear the left-wing corner-kick.

It broke to the midfielder who walloped in a 20-yard drive that took a nick off Steven Saunders to flummox Fox as it hurtled low into his left-hand corner of the net.

Lennon then took the opportunity to introduce £3.5million new Bhoy Patryk Klimala for the tiring Griffiths.

Following a near-miss from Edouard, Daniel Arzani came on to replace his fellow-Aussie Rogic five minutes from time.

Two minutes into stoppage-time sloppy play from Jullien allowed an opening for the Jags and Frimpong was booked for clashing with Dario Zanatta. Muir, on this occasion, had no hesitation in pointing to the spot and Stuart Bannigan fired the penalty-kick low past Forster to his left.

But there was no shock as the ref blew for full-time only seconds later.

Now all eyes are on Kilmarnock and Rugby Park on Wednesday when the Premiership resumes.