IT was a case of onward Cristian’s soldiers as Celtic responded to a Jags leveller to fire themselves into the next round of the Betfred League Cup.

The holders were coasting along a goal to the good – Leigh Griffiths’ first-half effort that was also his 99th for the club – when the home side snatched a shock equaliser in the 73rd minute.

However, marauding Coast Rican right-back Cristian Gamboa, back in the side with Mikael Lustig on the subs’ bench, led the fightback to set up two quickfire strikes from Moussa Dembele and Tom Rogic to settle the encounter.

The returning defender played two exquisite one-twos with James Forrest, made lung-bursting runs into the box and presented his colleagues with the opportunities to kill the tie.

The Hoops had taken their foot off the gas after the hour mark in a contest that looked as good as over.

However, complacency brings its own calamity and that allowed Alan Archibald’s battlers into the match.

In the 18th minute, a breathtaking swivel and turn from Scott Sinclair set up the opener for Griffiths. The winger, looking lively and in the mood, was alert when Emilio Izaguirre lobbed a throw-in to Oliver Ntcham.

He nudged it in front of the flamboyant attacker who spun past Christie Elliott at the by-line and sent an inviting ball low into the danger zone.

Griffiths was onto it in a flash as he thumped in a left-foot effort that sizzled through a crowd of players before eluding the diving Cammy Bell.

It was a goal the Hoops deserved as they, as expected, dominated proceedings. 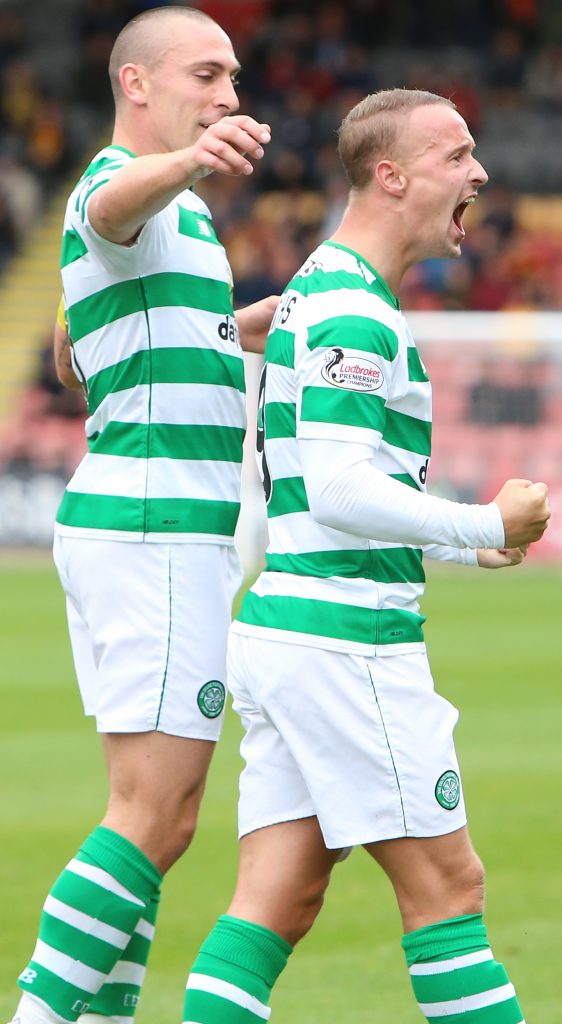 NINETY-NINE DOWN AND ONE TO GO…Leigh Griffiths is congratulated by Scott Brown after opening the scoring against Thistle.

Izaguirre was looking as though he had never been away as he bombed up and down the left wing and he produced one of the best passes of the game with a ball down the touchline that sent Sinclair scampering free in the 14th minute.

His first cross was blocked and he sent the rebound deep to the back post where Griffiths was lurking, but a Thistle head got in the way and the ball was diverted to safety.

Gamboa was adding menace to the right wing as he raided at every opportunity and teamed up with young Mikey Johnston who was also eager to shine on a first team appearance.

It took only four minutes for the holders to get a shot on  target and that came from Rogic after being set up by Griffiths, but the Aussie’s low left-foot drive was well held by Bell at his right-hand post.

A couple of minutes later, the languid midfielder had another effort and that was deflected past the upright.

In the early stages, there were heartening signs from Sinclair, Gamboa, Rogic, Izaguirre and Johnston to get involved.

In the 26th minute, Rogic set up Johnston, but the youngster’s left-foot shot lacked the oomph to trouble Bell who scooped the ball firmly to his chest.

Shortly afterwards, Johnston returned the compliment with a pass to the Aussie playmaker, but once again the Jags keeper was equal to the threat.

Three minutes after the interval, the Firhill side’s Jack Storer was extremely lucky to escape a straight red card for an over-the-ball challenge on Scott Brown that caught the Hoops captain on the shin.

It was dangerous and late, but, remarkably, referee Craig Thomson, merely yards from the incident, was content to show only a yellow.

In the 65th minute, Griffiths’ hopes of becoming a ton-up Bhoy ended when he was replaced by Moussa Dembele as Brendan Rodgers gave the French striker some game time before Thursday Europa League play-off.

Immediately, the powerhouse forward almost scored after bursting between two Thistle defenders and blitzing in a left-foot drive, but Bell clawed the ball to safety.

James Forrest was then introduced for the impressive Johnston in the 70th minute, but only three minutes later it was all-square.

Once again, the central defence was exposed when a neat one-two was played around Kristoffer Ajer and Jack Hendry appeared slow to read the situation.

As he tried to get across to close down Andrea Mbuyi-Mutombo, the Jags’ Congolese international striker took aim and fired low beyond the helpless Scott Bain. 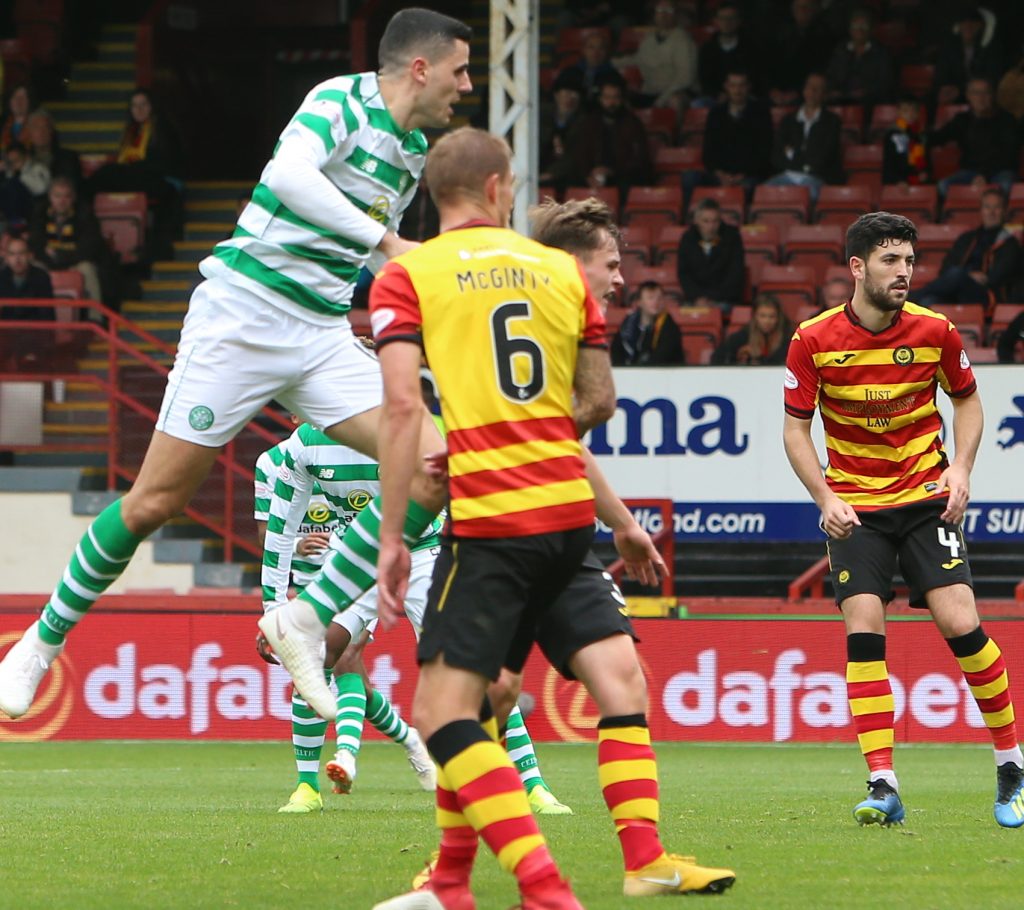 WIZARD OF OZ…Tom Rogic arrives smack on time to score the third goal.

The home team’s joy lasted only three minutes until Gamboa intelligently linked with Forrest, burst forward at pace and picked out Dembele in the box and the Frenchman turned it home.

Callum McGregor then replaced Ntcham, but it was Gamboa who stepped into the spotlight again to set up the third and decisive goal.

He made another superb run to get onto a Forrest pass, look up and delivered a peach of a cross that invited Rogic to knock it past Bell and the midfielder duly obliged with a right-foot effort.

So, Celtic might get some respite from the snipers who have been having a field day, but Brendan Rodgers will know his team still have to work on their cohesion at the back and their concentration levels.

For the time being, though, the Celtic manager and his players can enjoy their first win in four games. 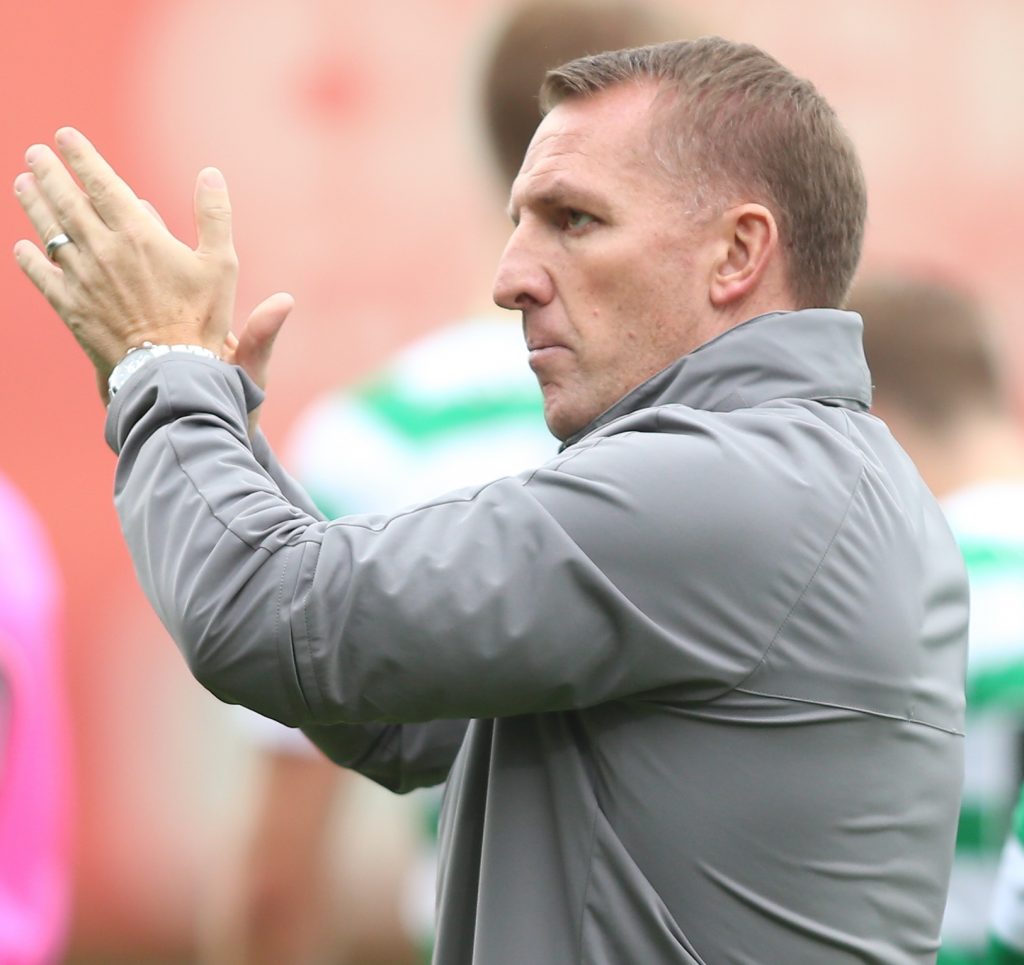 THANKS, FANS…Brendan Rodgers applauds the Celtic support at the end of the 3-1 win at Firhill. Pics: Geo.