ALLY McCOIST has pathetically and inaccurately pinpointed a Celtic incident from OVER A YEAR AGO during a war of words with Chris Sutton over the inconsistences of the SFA disciplinary process.

The former Ibrox player and manager was on the back foot when the ex-Celtic star asked him if was suggesting the SFA compliance officer favoured the Parkhead side.

Alfredo Morelos has already had two retrospective suspensions this season and Kemar Roofe joined him on the banned list following his stamp on Murray Davidson that saw the St Johnstone midfielder forced to limp off in the first-half of the Premiership game in Glasgow last month.

Astonishingly, the assailant was only booked for the lunge. His fiery Colombian team-mate copped a mere yellow card for elbowing Dundee United’s Mark Connolly in the face at Tannadice and, remarkably, referee Kevin Clancy, with a good view, didn’t even book the frontman for his obvious foul on Hibs’ Ryan Porteous at Easter Road.

On all three occasions, the first-half challenges, later deemed dangerous play by the three-man panel, the players were allowed to remain on the pitch for the remainder of the games instead of the Govan side being reduced to 10 men, as CQN highlighted earlier this week.

HEAD TO HEAD…Chris Sutton and Ally McCoist on BT Sport.

But, during the verbal joust with Sutton on BT Sport’s Scottish Football Extra, McCoist made a bizarre comparison with a Leigh Griffiths challenge on Hamilton’s Alex Gogic – it was actually Sam Woods – that was not seen as a red card by the match official on the day, Nick Walsh.

If nothing else, the so-called Govan legend almost got it right.

The flashpoint came during a 4-1 win for the champions at New Douglas Park on February 2 2020. Griffiths was hauled back by Woods and there was a coming-together while the Accies defender was on the ground. It actually looked as though the Scotland international was attempting to disentangle his foot after the clash.

Accies defender Gogic chose to get involved and the match official booked both players following a shoving match.

Celtic and their Glasgow neighbours have been critical of the SFA system this season with Hoops skipper Scott Brown and Albian Ajeti both cleared in recent days after being hit with notice of complaints following separate incidents in the 4-0 win over Kilmarnock 11 days ago.

Sutton and McCoist discussed the topic and the one-time England international said: “If you’re going to ban Ajeti for two games for diving, it has to be across the whole of the league. Every incident has to be looked at and I think that’s what Neil Lennon was getting at this week.

“The fact of the matter is Celtic and Rangers are being singled out, it seems.” 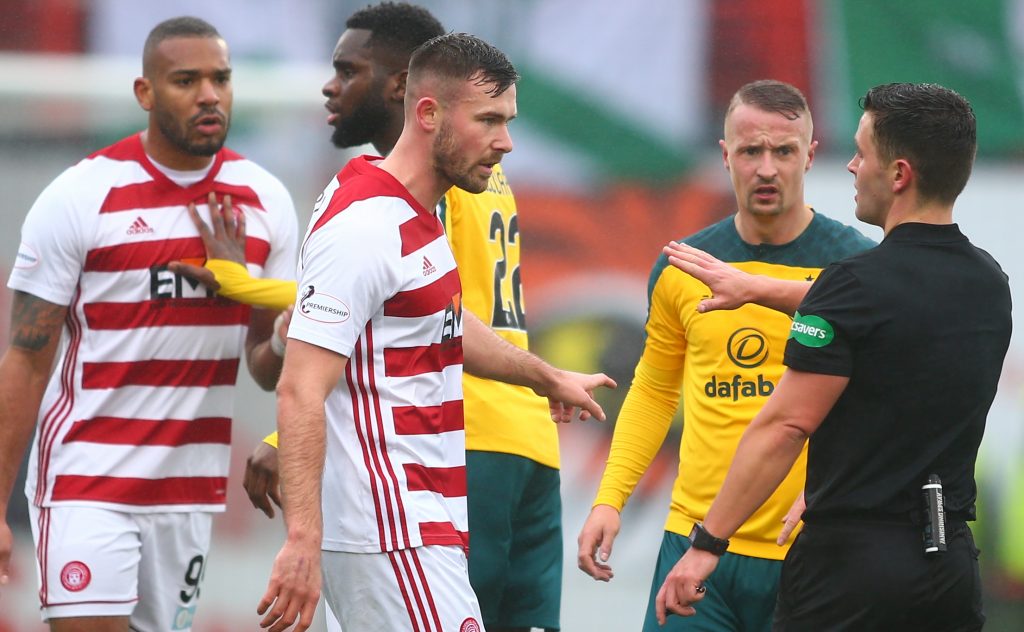 FLASHBACK…Leigh Griffiths looks on as referee Nick Walsh sorts out a kerfuffle at Hamilton Accies in February 2020.

McCoist said: “Well, not so much. I agree entirely with what you’re saying, but I find it difficult.”

Sutton replied: “I know you find it difficult.”

McCoist countered: “I’m about to tell you, Morelos’ stamp, quite rightly, was punished, yet Leigh Griffiths’ stamp on Gogic at Hamilton isn’t.

“Also, Kemar Roofe has had a suspension, when he probably had one of the worst tackles ON him against St Johnstone at Ibrox.

“That might be the worst of the lot. And it’s not cited!

McCoist: “I’m suggesting the same that Steven Gerrard is suggesting: that the lack of consistency is absolutely embarrassing.” 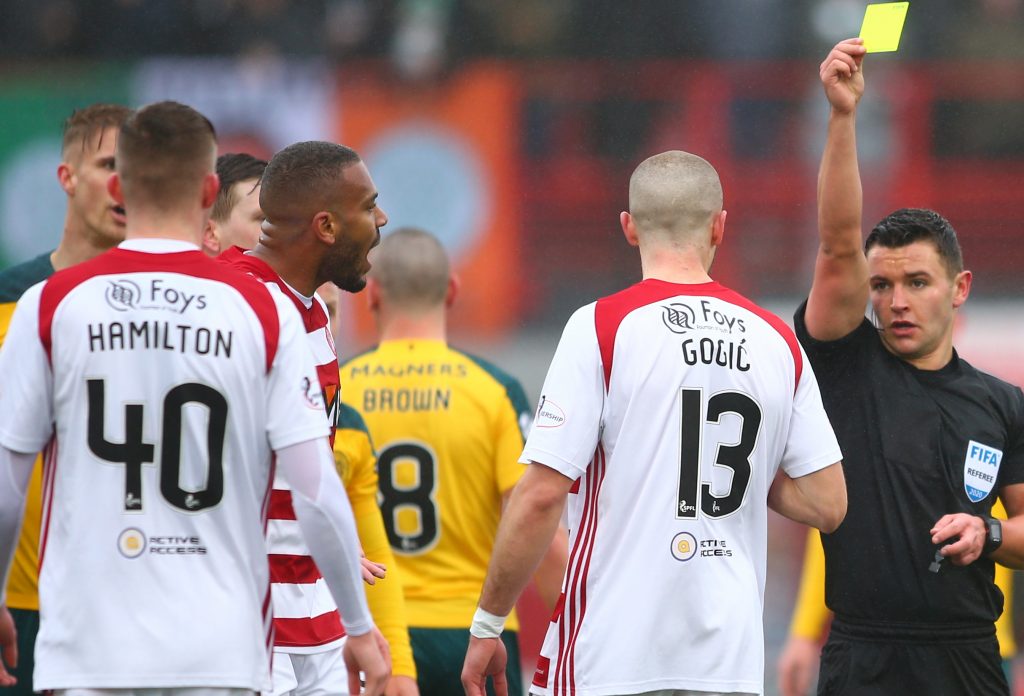 FLASHBACK…Accies defender Alex Gogic is booked by the match official for his part in the aftermath.

Sutton: “Yes, there is a lack of consistency because it seems to be trial by social media, trial by television. And it’s not the same across the board.

“Celtic and Rangers players, because they’re playing more on television, seem to be getting penalised. That’s true, isn’t it?”

McCoist: “The lack of consistency is embarrassing, it’s shocking. The fact Rangers seem to be getting the brunt of it is clearly bad luck.”

Sutton: “How can you sit there with a straight face and say that Rangers have been getting the brunt of it? Over the years, come on!”

The debate rambled on with questions flying around.

Luckily for McCoist, Sutton wasn’t around to discuss the moment John Greig decked Jimmy Johnstone off the pitch in a New Year’s Day game at Ibrox in the mid-sixties. Referee Tiny Wharton didn’t even book the Rangers captain for the assault.