Celtic Quick News on News Now
You are at:Home»Exclusive Series»POSTECOGLOU: A YEAR IN PARADISE (August)
By CQN Magazine on 1st June 2022 Exclusive Series

Please enjoy Day Three of our twelve-part series, ‘POSTECOGLOU: A YEAR IN PARADISE’, as we chart the months as they tick down to a massive celebration. 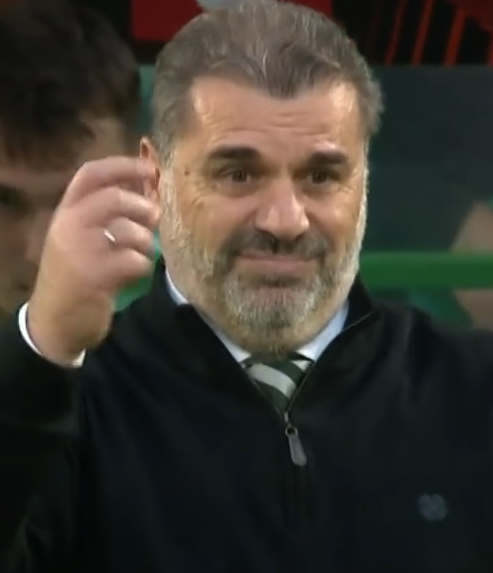 MAN ON A MISSION…Ange Postecoglou watches his Hoops in action.

ANGE POSTECOGLOU had to wait until the fourth encounter for his first win as Celtic manager – and then declared: “It’s NOT the way I want us to play.”

The Greek-Australian had arrived with a hard-to-please reputation and that was emphasised after he had watched his players overcome FK Jablonec 4-2 in the Czech Republic in the first leg of their Europa League qualifier on August 5.

Goals from Liel Abada, Kyogo Furuhashi, James Forrest and Ryan Christie made certain the Hoops were clear favourites to play Dutch side AZ Alkmaar in the play-off. Postecoglou, though, was far from impressed by some horrendous defending that allowed the home side to net twice while new Bhoy Joe Hart had to make a crucial stop in the fading moments when he was left facing a one-on-one situation.

The manager said: “The result is a positive one. I think it’s important, particularly for the players who have been working hard. It’s a reward for them.

“Hopefully, it gives them some confidence and belief moving forward.

“The performance was okay. We started really well. The first-half hour was excellent. I just felt we lost our way a little bit after that and lost control of the game, especially second-half.

“We scored four goals, but we had some unbelievable opportunities to score more.

“I felt we just didn’t control the game as well as we could have after 35 minutes of the game.

“Defensively we were really open. We still had chances, but it’s NOT the way I want us to play.

“We had Kyogo’s first start, Joe Hart’s first start, Carl Starfelt’s second start. There’s a whole range of reasons why the cohesion isn’t quite there yet.

“This group has been together for maybe 10 days. So, I don’t want to be too hard on the players.

“But, at the same time, I want to make sure we are really honest with our analysis of our games.” 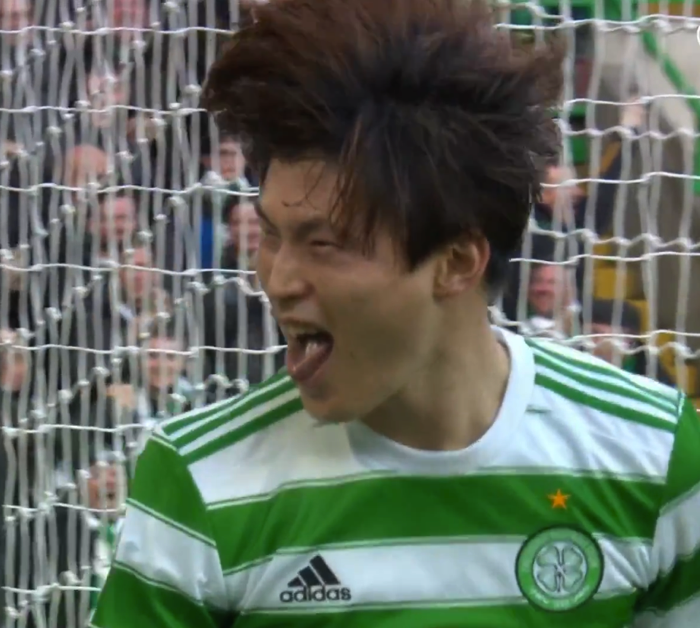 WELCOME TO PARADISE…Kyogo Furuhashi fires in a hat-trick in his first appearance at Celtic Park.

Four days later, Kyogo took the opportunity to make a fine first impression at Parkhead when he flashed in a hat-trick in the 6-0 rout of Dundee. In fact, the striker, signed for £4.6million from J-League Vissel Kobe, could have claimed SIX, but passed up two reasonable chances and saw another close-range shot booted off the line.

Postecoglou praised the new arrival who was given the nod to start ahead of Odsonne Edouard for the second successive game.

The beaming gaffer said: “Kyogo got three goals and he could probably have got a couple more, but his defensive work was also outstanding and that got the crowd going. He was closing people down and that’s what he brings, that energy, and I think the other boys filtered off that.

“But I just think that, generally, our intent was good for the 90 minutes. We were relentless and didn’t take our foot off the pedal, so it was pleasing.” 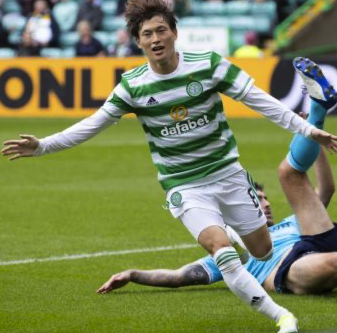 FIRST OF THREE…Kyogo Furuhashi turns away after kicking off his hat-trick spree in the 6-0 win over Dundee.

A crowd of 24,500 was allowed into the ground – the first time fans had been at a Premiership game at the stadium since a 5-0 victory over St Mirren on March 7 the previous year – and Postecoglou added: “It was a massive buzz. How could it not be? Right from the moment the buses arrived.

“Anyone I spoke to who had any sort of experience of the football club told me the number one thing is the atmosphere and the energy generated at Celtic Park.

“Look, I feel pretty blessed that I’ve come in at a time when the crowds are slowly getting back in and it was great to have 24,500 there on this occasion.

“As much as it was my first experience, it was even more special for the players who have been here and missed it last year. They just felt again what it’s like to be a Celtic player and it was a great day all round.” 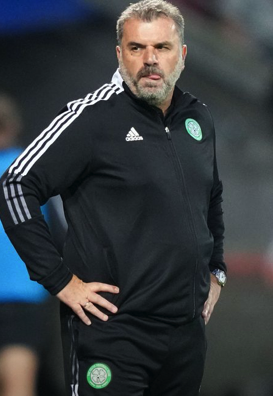 Postecoglou continued in a similar theme after the Hoops’ 3-0 win over FK Jablonec in front of a full house in the return in Glasgow with a double from David Turnbull and another from Forrest.

For the first time, the manager’s wife Georgia and children Max and Alexi were in the ground to share the experience and he said: “It was brilliant with the fans. For me, that’s what football’s all about.

“It’s great to have success and to win, but to have these kind of experiences is why I fell in love with the game in the first place.”

Postecoglou, though, had something to ponder following the Premier Sports League Cup performance against Hearts in Glasgow three days later. The team once again claimed three goals with efforts from Edouard, Stephen Welsh and Kyogo, with his fifth in three starts, in the 3-2 victory.

However, the Hoops boss insisted he still needed more signings before the transfer deadline which was due in a fortnight.

Postecoglou watched his team dominate the Tynecastle side for almost an hour, but a moment of slackness by Carl Starfelt allowed the opponents back into the encounter when he gifted Liam Boyce a penalty-kick and a second goal in stoppage time took a gloss off the scoreline.

The gaffer was afforded the opportunity to bring on James McCarthy in the 74th minute for his long-awaited debut in the hoops with the lifelong Celtic fan replacing Man of the Match Tom Rogic who was irresistible for large swathes of the match.

Postecoglou admitted: “It was great getting James some game time, but I keep saying it, we need more players to support the ones we have.

“Some of them are putting in enormous shifts with some playing 90 minutes and others 70 minutes.

“The mistakes don’t have to happen, but, unfortunately, that’s the position we’re in at the moment.

“Hopefully, getting a few more players in will allow us to maintain the standard for 90 minutes.” 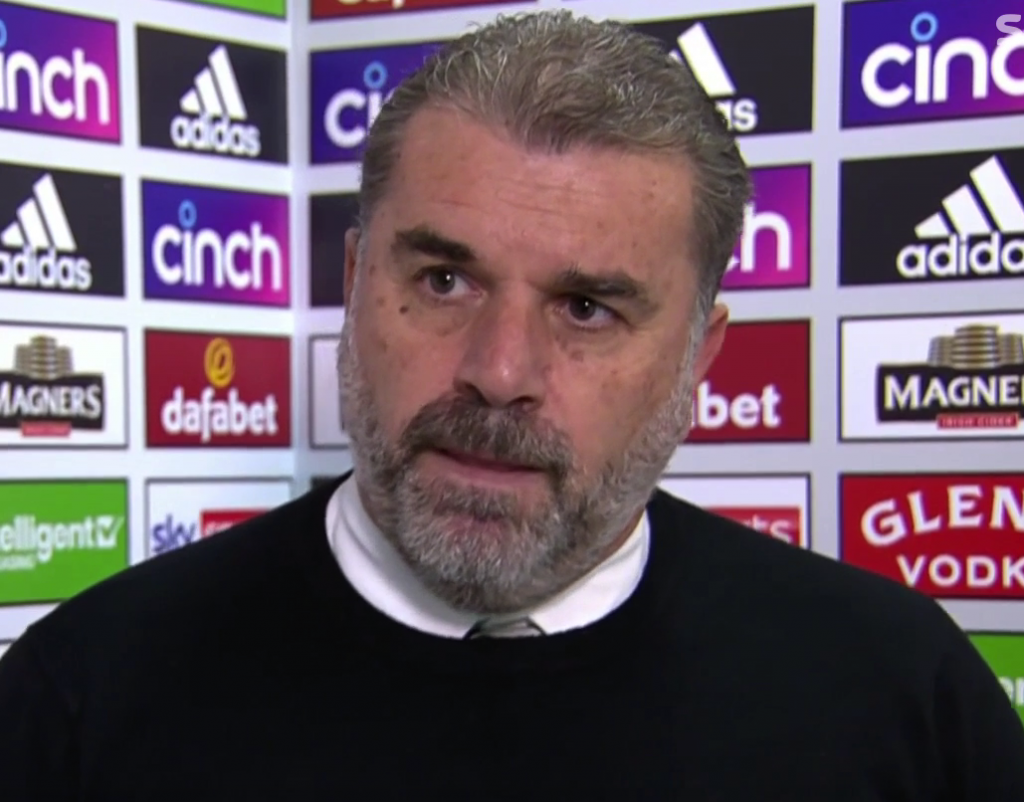 LOOKING TO THE FUTURE…Ange Postecoglou after the Ibrox defeat.

Postecoglou was his usual wary self the following midweek as he watched his side take a 2-0 first leg lead over AZ Alkmaar in their Europa League play-off in Glasgow where Kyogo opened the scoring before a deflected Forrest effort brought a second. He played the victory low key and said: “Satisfied to get the win, of course, but we’re only halfway there.”

The manager, though, was profuse in his praise of his players when they overcame St Mirren 6-0 three days later at the same venue where David Turnbull took centre stage with his first professional hat-trick while winger Liel Abada, looking a real bargain at £3.5million, paved the way for the landslide triumph with two goals.

And Odsonne Edouard got in on the act when he nonchalantly rolled one past the overworked Jak Alnwick. It was a procession in Paradise and the Paisley outfit didn’t help their cause with the deserved red card for Alan Power for a wild lunge at Turnbull when his side were already a goal adrift.

Postecoglou said: “We started really well, we kept them under pressure, we scored our goal, we had a couple of good chances and then the sending off helped us in terms of being able to control the game better.

“But we still had to maintain our discipline. It was a good afternoon, the players still put in a good work-rate, good work ethic and we were still going for it right until the end.

”Liel has been brilliant. Sometimes when you’re young you can shy away from being aggressive in these things, but he doesn’t. We got the rewards and I was pleased with him and David because we don’t want to rely on one or two to get the goals and we’ve got multiple threats.”

Postecoglou celebrated his 56th birthday the day after the team squeezed past AZ Alkmaar 3-2 on aggregate after losing 2-1 in the Netherlands, despite getting off to a flyer with an early goal from Kyogo. Starfelt helped put on the pressure when he turned one past Hart, but Celtic hung on during a nervy second-half.

His first Glasgow derby oomed into focus with a trip across the city to Ibrox due on Sunday August 29. It was settled by a header from Filip Helander when he rose unchallenged to a right-wing corner-kick to head beyond Hart in the 68th minute.

In the immediate fall-out, the manager admitted making an error over playing Edouard through the middle with Kyogo on the left wing. The Frenchman could have justified his selection when he was set up with an ideal opportunity by the speedy Japanese attacker in the 25th minute, but he made a mess of his effort from only six yards as he horribly screwed his feeble shot well wide of the post. 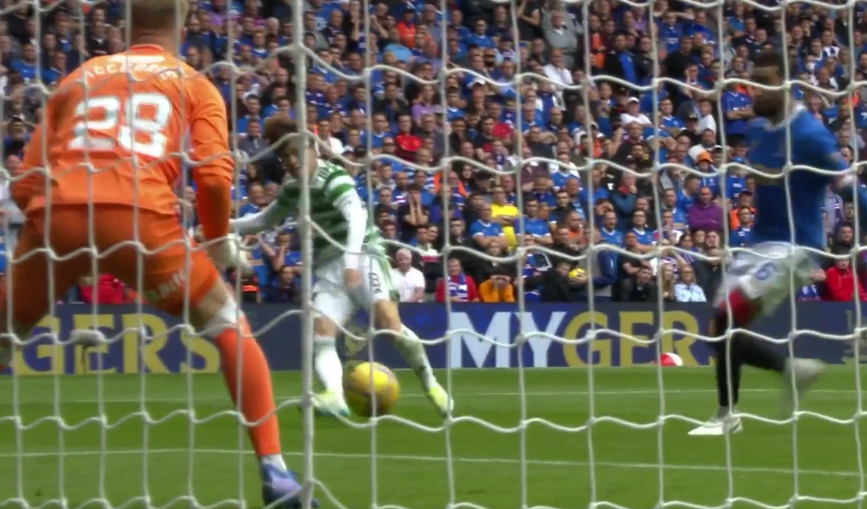 OUT OF LUCK…Kyogo Furuhashi is denied by Robby McCrorie as the rookie Ibrox keeper sticks out a leg to divert his goalbound effort.

Only moments after the game’s only goal, Edouard was hauled off and replaced with Tom Rogic and Kyogo took over through the centre. He was denied twice by rookie keeper Robby McCrorie from giving the visitors the point they deserved after dominating possession for more than two-thirds of the encounter.

Explaining his quickfire substitution, Postecoglou said: “I just thought Kyogo would be much more of a threat down the middle. To be honest, I probably should have started him there to begin with, but obviously with James Forrest out we’re a little bit short in the wide areas.

“That’s why we started with him out to the left, but I knew with his speed getting Kyogo in the middle was going to cause them problems and that was the main reason.”

Reflecting on Edouard’s glaring miss, Postecoglou added: “It’s disappointing, obviously. It was a tight game, a derby game without a lot of chances and not a lot of open spaces.

“The first goal was always going to be important, we didn’t take our opportunity when we had it and paid the price.”