CELTIC boss Ange Postecoglou has been named the Premiership Manager of the Month for January following his team’s 100 per cent record following the winter break.

The Hoops have racked up three league wins – Hibs (2-0), Hearts (2-1) and Dundee United (1-0) – and a 2-1 success over Alloa in the Scottish Cup during the month and kicked off February in impressive fashion by hammering Giovanni van Bronckhorst’s Ibrox side 3-0 in midweek.

The 56-year-old Greek-Australian has led the team to the top of the Premiership for the first time this season and they hope to add to their one-point advantage when they face Motherwell at Fir Park on Sunday.

Postecoglou, speaking to the club website, said: “It’s nice for us to be recognised in this way and we thank the League for this award, but, as always, it is for us as a collective, including myself, my backroom team and the players. 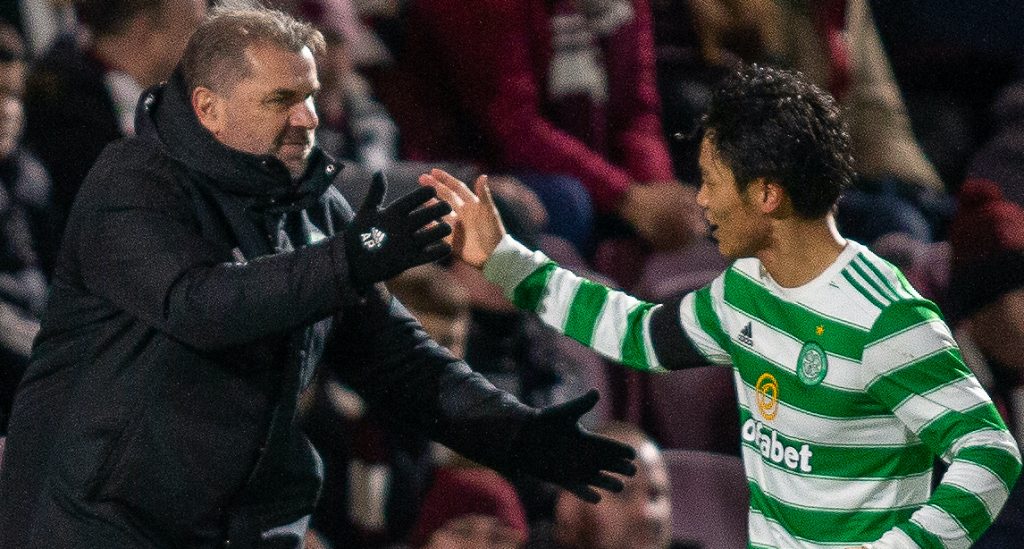 THAT’S MY BHOY…Ange Postecoglou congratulates Reo Hatate after his spectacular opener in the 2-1 win at Hearts.

“It’s a reflection really of the consistency we have all shown, with some great performances home and away in very testing matches.

“As well as our consistency, I have been pleased that we have been playing some exciting football, really the way I want our team to play and in a way which I hope is also attractive to our supporters.

“Obviously, we hope we can continue these levels, but we are well aware of the tough challenges ahead.”

This award is Postecoglou’s second in his debut campaign in Scotland, having also picking up the October honour.

The Hoops take on Graham Alexander’s team in Lanarkshire for the second time this term and earned a solid 2-0 victory in October with strikes from Filipe Jota and David Turnbull.

A goal from Tom Rogic gave the Parkhead men a 1-0 triumph in Glasgow in December.