ANGE POSTECOGLOU will take charge of Celtic for the seventeenth time against Bayer Leverkusen in the Europa League Group G encounter at Parkhead tonight.

Coincidentally, the manager also made his debut in the dug-out in the east end of Glasgow in a European match on July 20 after being named as the new Hoops boss the previous month.

It has been a whirlwind period for Neil Lennon’s 56-year-old successor – especially when you look at the 14 players who were utilised in the 1-1 draw with FC Midtjylland in the first leg of the Champions League opening qualifier over two months ago. 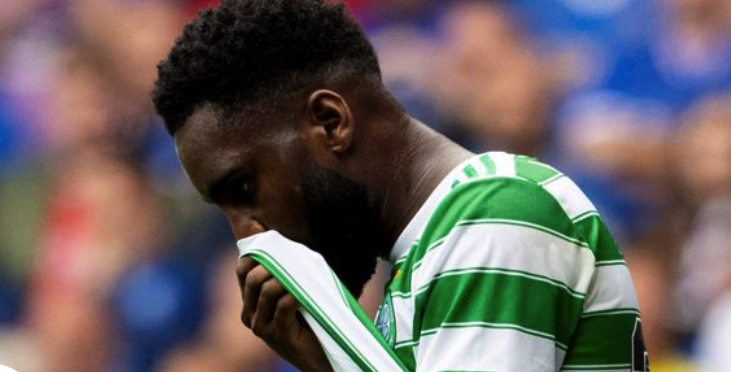 FAREWELL…Odsonne Edouard’s head is bowed after missing a sitter at Ibrox in his last Celtic appearance.

For a start, Odsonne Edouard (Crystal Palace) and Ryan Christie (Bournemouth) have left the club and another four are highly unlikely to make an appearance against the Bundesliga giants. Captain Callum McGregor and his club and country team-mate Greg Taylor are injured while Greek keeper Vasilis Barkas, who gifted the Danish side their equaliser, has now dropped to third in the pecking order behind Joe Hart and Scott Bain.

Young defender Dane Murray was given the nod to go into central defence beside Stephen Welsh following the foolish red card for Nir Bitton just before the interval.

He played in the return leg the following week when the Hoops lost 2-1 in extra-time to exit European football’s elite competition and has now returned to stand-by duty with Carl Starfelt and Cameron Carter-Vickers joining during the transfer window.

Liel Abada, the £3.5million arrival from Israel, smashed in a superb goal on his debut, but was forced to make way after the inexpicable actions of his experienced compatriot.

WELCOME…Liel Abada celebrates his first Celtic goal on his debut against FC Midtjylland in July.

Since that evening, the lively 19-year-old winger has taken his goal tally to six, just one behind top scorer Kyogo Furuhashi, another player who has no chance of making the starting line-up against the Germans because of a knee problem.

Postecoglou has guided his team to eight wins in the previous 16 outings with six losses and two draws. The team have netted 38 goals while conceding 18.

* DON’T miss the unbeatable match report from Celtic v Bayer Leverkusen this evening – only in your champion CQN.