Celtic Quick News on News Now
You are at:Home»Latest News»PRAISE FOR THE STAR LENNY ‘JUST CAN’T LEAVE OUT’
By CQN Magazine on 26th October 2019 Latest News

In the space of a year, the Scotland international midfielder has come from being on the edges of the first team to become a key man in Neil Lennon’s champions’ line-up.

Christie came on against Hearts at Murrayfield in the Betfred League Cup semi-final with the score standing at 0-0 at half-time. He only got the opportunity to get the nod from Brendan Rodgers because Olivier Ntcham had sustained a knock in the first 45 minutes.

However, the Highlander’s impact on proceedings tilted the tie in Hoops’ favour as he contributed to two goals and claimed a spectacular effort as the Edinburgh outfit folded to a 3-0 defeat..

Christie signed a three-year extension a couple of weeks later and, of course, scored the only goal of the Cup Final against Aberdeen to win the silverware for the Parkhead men for the third successive season. 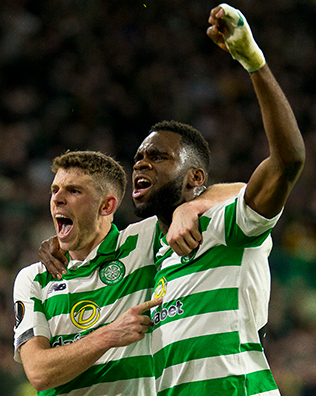 GLORY BHOYS…Ryan Christie is joined in his goal celebrations by Odsonne Edouard after his equaliser against Lazio.

And the former Inverness Caley Thistle star, who had been on the verge of signing for Aberdeen following his 18 months on loan at Pittodrie, took the centre stage again on Thursday with his awesome performance in the 2-1 Europa League triumph over Lazio at a rocking Parkhead.

Sutton, speaking in the Daily Record, said: “It’s astonishing now to think exactly this day a year ago, Christie wasn’t even really considered a regular option for Brendan Rodgers. Now the boy is a first pick.

“Watching him add another sensational European performance to his CV, his progress has been astounding.

“Before any Celtic supporters try to have a pop at me, I’m not trying to sell off the team’s best players or advocate they leave.

“I’m just saying, given scouts from south of the border are having a look at Odsonne Edouard, Callum McGregor and Kristoffer Ajer, there is no way they won’t be noting Christie’s rise, too.

“The dynamism and creativity he gives to Lennon’s side is something else. I recall Scott Brown saying the lad had three lungs with the amount of ground he covers.

“Christie sets a rapid tempo for the team. His work off the ball sets the tone. He closes people down at speed and keeps it going the entire game. That drives others to do the same.

“When he has the ball, he has such technique and vision. At times, I actually think he might be better slowing down a bit. Just taking that extra split-second now and again when he has time to do it, but that’ll come the older he gets. 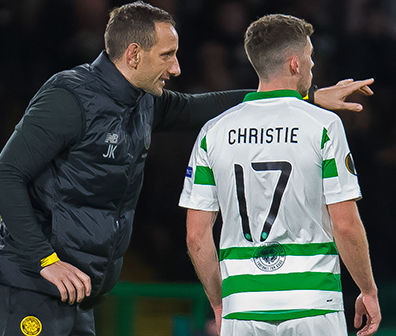 GETTING THE POINT…Ryan Chritie gets some touchline instructions from Hoops No.2 John Kennedy.

“The main thing is Christie gives you goals, he gives you them at big moments now and he also provides assists. His strike against Lazio was his sixth in Europe this season and his delivery for Christopher Jullien to bag the winner was right on the money.

“Christie is the full package and I can pay him no bigger compliment than saying there seems absolutely no way back for Tom Rogic in terms of that No.10 position.

“I can’t believe I’m saying that because I’m a huge fan of the Australian. He is also full of craft and gets you goals, but he plays a pace gears below Christie. Celtic are better with the latter’s pace and drive.

“Of course, Rogic will be in the position tomorrow at Aberdeen with Christie still serving a domestic suspension, but that is surely a temporary measure with the Scotland star returning for St Mirren on Wednesday.

“You just can’t leave him out.”