BRENDAN RODGERS believes his Celtic players will cope with any setbacks when they take on Valencia in the Europa League at Parkhead tomorrow night.

The Hoops boss used the RB Leipzig game in their Group B encounter in November as an example of how his team can bounce back following a blow.

The champions had bossed the percentage of the game against the Bundesliga outfit and deservedly took the lead through Kieran Tierney.

However, the Celtic support was silenced when the Germans equalised against the run of play. But a mere 14 seconds later, Odsonne Edouard had struck what proved to be the winning goal. 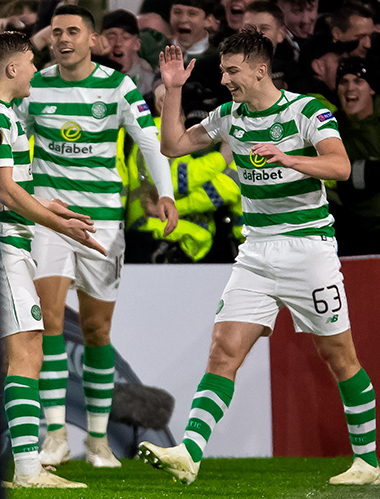 Rodgers insisted: “Patience is part of the game. That’s the understanding of the game. You’re playing against good teams. Valencia have only lost four times all season in one of the biggest leagues in Europe.

“It’s about respecting that the opponent is a good side. It’s up to us to ensure we go and deliver a game and an intensity in our game that gives the supporters that hope.

“The Leipzig game was a wonderful demonstration of that, where we played really well. We played ever so well but then got pegged back. They scored a goal that we could have defended better, but then straight away we go and score.”

There was also a valuable – and harsh – lesson to be learned in the previous European encounter under the lights in the east end of Glasgow when RB Salzburg visited and went home with a 2-1 triumph to complete the group with a 100 per cent record. The Austrians never allowed Rodgers’ men to get into any sort of rhythm as they started at a high tempo and maintained in for the bulk of the 90 minutes. 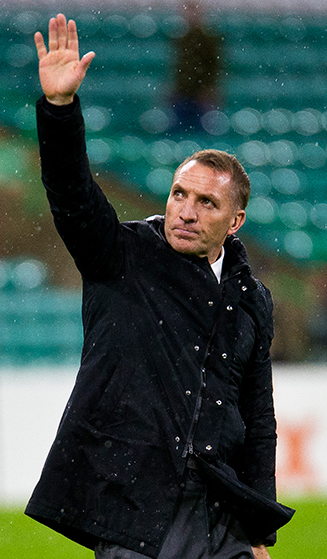 HAIL HAIL…Brendan Rodgers waves to the fans at the end of the game against the Bundesliga giants.

The Hoops gaffer added: “They’re always tense games because there’s so much on them, but they’re really enjoyable. They players enjoy them, we, as staff, enjoy them and, hopefully, the support can enjoy them, as well.

“You’ve always got to be mindful of the fact, as I always say, a slap in the back is never too far away from a slap on the backside.

“The players are absolutely amazing, the effort that they put in, not just in games, but on a daily basis, to prepare themselves, to get themselves right.

“We plan, we prepare, we give them the detail for each game, we never miss out, as coaching staff, on any detail for them to be the best they can be.

“And then the players have got to go and deliver. On Thursday, we hope to do that.”