ANGE POSTECOGLOU struggled to praise his Celtic players after their title triumph at Tannadice tonight – because he was lost for words!

The beaming Greek-Australian was clearly emotional minutes after full-time in the 1-1 draw with Dundee United that made it mathematically certain the Premiership crown would return to Parkhead for the tenth time in 11 years.

Postecoglou had said back on September 19 after their third loss in six league games, his team would have to be near flawless if they had to have any chance of winning the coveted silverware. 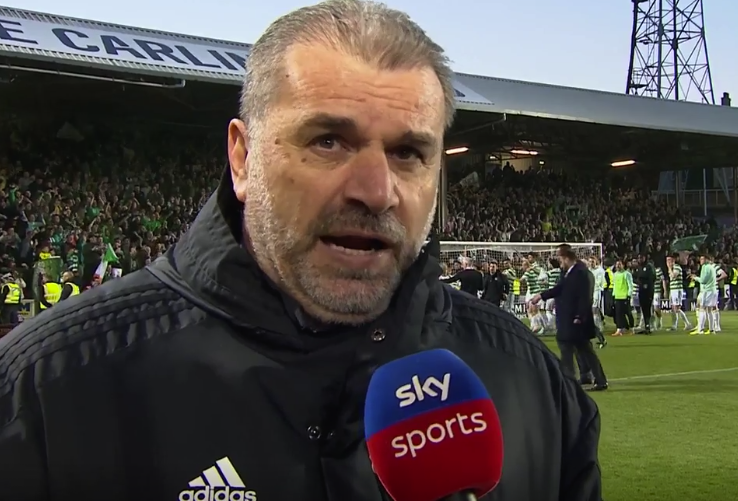 THE SKY’S THE LIMIT…Ange Postecoglou praises his title-winning Celtic players at Tannadice.

They had lost 1-0 to Livingston in West Lothian which added to the disappointment of losses at Tynecastle and Ibrox to leave the Hoops trailing with some critics already writing them off.

Tonight on Tayside, they got the point they required to achieve the flag in their THIRTY-FIRST consecutive unbeaten league game on their way to a sensational success.

Postecoglou was cornered by Sky News shortly after the final whistle as the team did a lap of honour and he said: “That was pretty special, mate. It’s probably the first time this year I’ve been lost for words.

“I’m really proud of the players, the staff and the supporters. Everyone. Nobody gave us much of a chance at the start of the year. To do what they’ve achieved this year, achieve the ultimate, is an unbelievable effort. 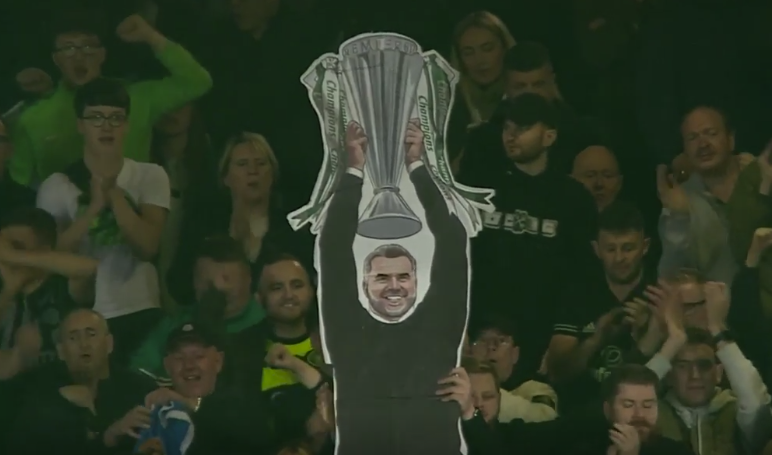 YOU GOTTA HAVE ART…an Ange Postecoglou cardboard cut-out in the crowd at Tannadice.

“It’s massive. The fans had a tough year last year. Not just the fact we didn’t win anything, but that they couldn’t do this, couldn’t come and support their team. They’ve been right behind us from day one and I couldn’t be happier.

“I’m just really proud of this group of players and the staff, they’ve been unbelievable for us this year.”

After a scoreless stalemate in the first-half, Giorgos Giakoumakis put the visitors ahead with a towering header in the 52nd minute with Dylan Levitt hitting a spectacular equaliser 20 minutes later.

However, the manager said: “I think our football has been outstanding, but the character this team has shown to get through the last 31 games and rise to every challenge and, as I said, I couldn’t be more proud.

“It was a bit nervy. You know, it’s only natural. But these guys have had their heads down and just been so narrow-minded about being successful that when you get so close there’s going to be a bit of nerves there.

Now the focus switches to the final curtain in Paradise on Saturday when Motherwell are the visitors.

It will be just like the good, old days with a party in the east end of Glasgow on Flag Day.