RYAN CHRISTIE has brought down the curtain on his six years at Celtic by telling the fans it was “a privilege to play in front of you”.

The 26-year-old Scotland international playmake quit the Parkhead side on deadline day with a cut-price £1million switch to Championship outfit Bournemouth.

It was a shock for Christie, who would have been a free agent at the conclusion of his contract at the turn of the year, to reject extension terms from the Hoops hierarchy to move to the second-tier south coast club, as ex-winger Davie Provan pointed out in CQN.

The smooth middle-of-the-park operator was signed by Ronny Deila for £500,000 from Inverness Caley Thistle in the summer of 2015 and had loan stints at the Highlanders and Aberdeen before Brendan Rodgers brought him back into the Parkhead fold in 2017.

Christie, writing on his Instagram account, said: “Thank you @celticfc for the last 6 years of my life. I will be forever grateful to have played a very small part in this clubs massive history. The 6 trophies/ 2 trebles we won together were truly special and will always make me proud.

“Thank you to all the fans for your incredible support and unconditional love. It was a privilege to play in front of you every week and the famous European nights were always incredible.

“Also thank you to the players, managers and background staff who all work so hard to make this club what it is and have helped me become the player and person I am today.

“I have met some amazing people during my time here and am lucky to have made friends for life. 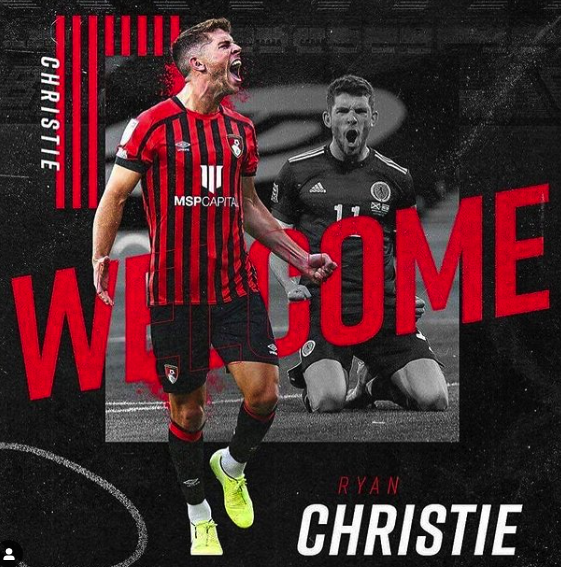 GOOD BUY…Ryan Christie is hoping to be a huge success at Bournemouth.

“I wish everyone involved with this special club all the very best for the future.

“After 8 seasons in Scotland I felt it was time for a change and a fresh challenge and I am very excited for the new chapter that lies ahead.”

Christie is currently involved with the Scotland international squad as boss Steve Clarke prepares for tonight’s crucial World Cup qualifier against Moldova at Hampden, only three days after losing 2-0 to Denmark in Copenhagen.

The Scots’ triple-header ends with a match in Austria on Tuesday with the player joining up with his new team-mates before Saturday’s league game against Barnsley at the Vitality Stadium a week today.