NEIL LENNON revealed his injury fears for the Betfred League Cup Final against Steven Gerrard’s Ibrox side at Hampden a week today.

The Celtic boss was speaking in the aftermath of the 4-1 Premiership triumph over Ross County in Dingwall where a double from Ryan Christie and contributions from Tom Rogic and Mikey Johnston made certain the champions celebrated their 10th successive triumph.

However, Lennon admitted Odsonne Edouard is a doubt for the silverware shoot-out after the French Under-21 marksman sat out his second game in a row after missing the 3-1 Europa League Group E triumph over Rennes on Thursday night.

The team’s talisman leads the problem pile-up for the Parkhead gaffer with Mohamed Elyounoussi, Boli Bolingoli and Olivier Ntcham also concerns while, of course, Greg Taylor, who played in the Highland romp, is Cup-tied after playing in the competition with Kilmarnock earlier in the season. 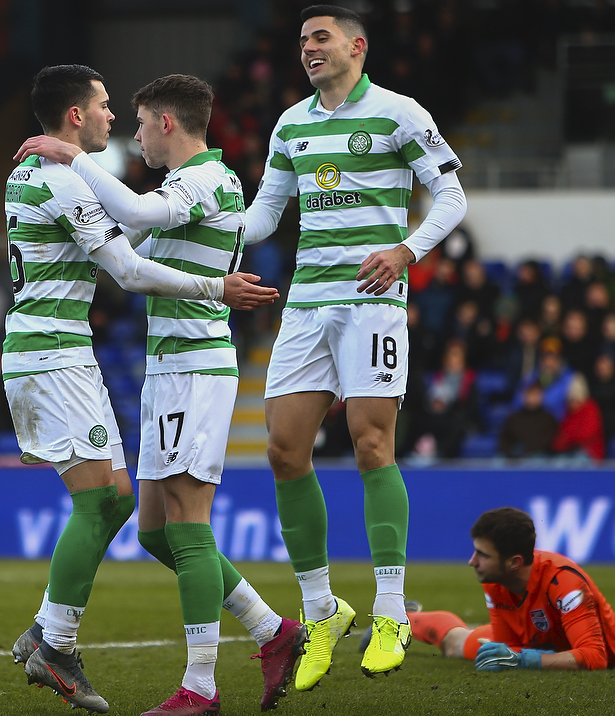 Lennon, who will prepare his team for Wednesday’s visit of Hamilton Accies, told the Daily Record: “We’re taking it day by day. I can’t pinpoint when he (Edouard) will be back.

“So. we have to soldier on without him at the minute and we’ll see how he is as the week goes on.

“Elyounoussi should be training on Wednesday or Thursday, so he should have a good chance of making it.

“We’re not sure on Boli yet. He might be a doubt. Jonny Hayes should be fine. I’m hoping Odsonne will be okay, as well.

“You don’t want to take a chance with it. He may or may not be fit. We will monitor it day by day.”

Lennon reflected on the four-goal display in the Highlands and added: “I’m delighted. It’s a really strong performance and we had really good control of the game for long periods and we looked a threat. 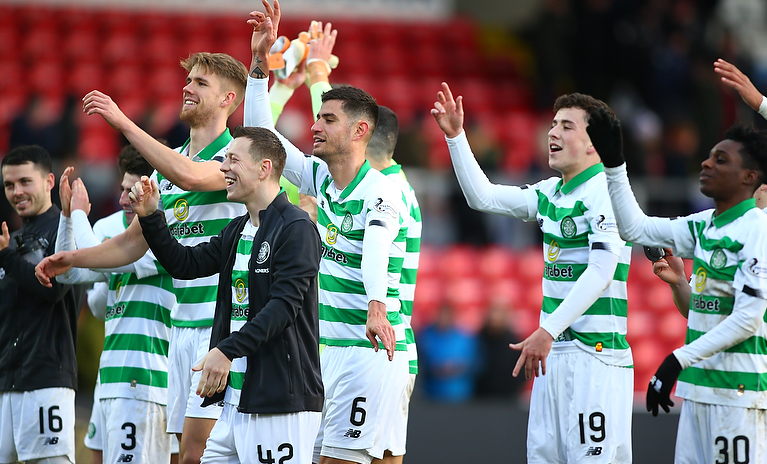 DINGWALL DELIGHT…the Hoops players celebrate with the visiting support at the end.

“We started off really well, we hit the woodwork twice on top of scoring four goals. It’s a very powerful performance from us again.

“The two centre-halves can be a threat at set-plays. That’s what we need and we want. With Odsonne being out, other players are contributing massively towards the goal total and as a manager you can’t ask for more.

”The form has been outstanding. I can’t fault it. It’s been so consistent and powerful and we look a real goal threat from a variety of positions.

“Our play in general is very exciting to watch and the fitness of the team is good. It could have been easy to come off it today.

“We did get a little bit sloppy for 10/15 minutes of the first-half because we were really in cruise control and we came off it a little bit, but the second-half performance was outstanding.”