DEPARTING skipper Scott Brown fired a parting shot as his 14-year Celtic career came to an end in the goalless draw against Hibs at Easter Road yesterday.

The Hoops’ abysmal season has at last come to a conclusion with the fallen champions limping in an inexplicable 25 points behind Steven Gerrard’s Ibrox side who celebrated their first title win in a decade with a 4-0 victory to preserve their unbeaten Premiership record.

Ironically, they brought down the curtain on the season with a success over Brown’s new club Aberdeen who gifted them an early opening goal when keeper Joe Lewis contrived to punch the ball into his own net.

But a defiant 35-year-old midfielder, who won a spectacular TWENTY-TWO honours at Parkhead, sent a message across Glasgow to emphasise only Celtic are “proper Invincibles”. 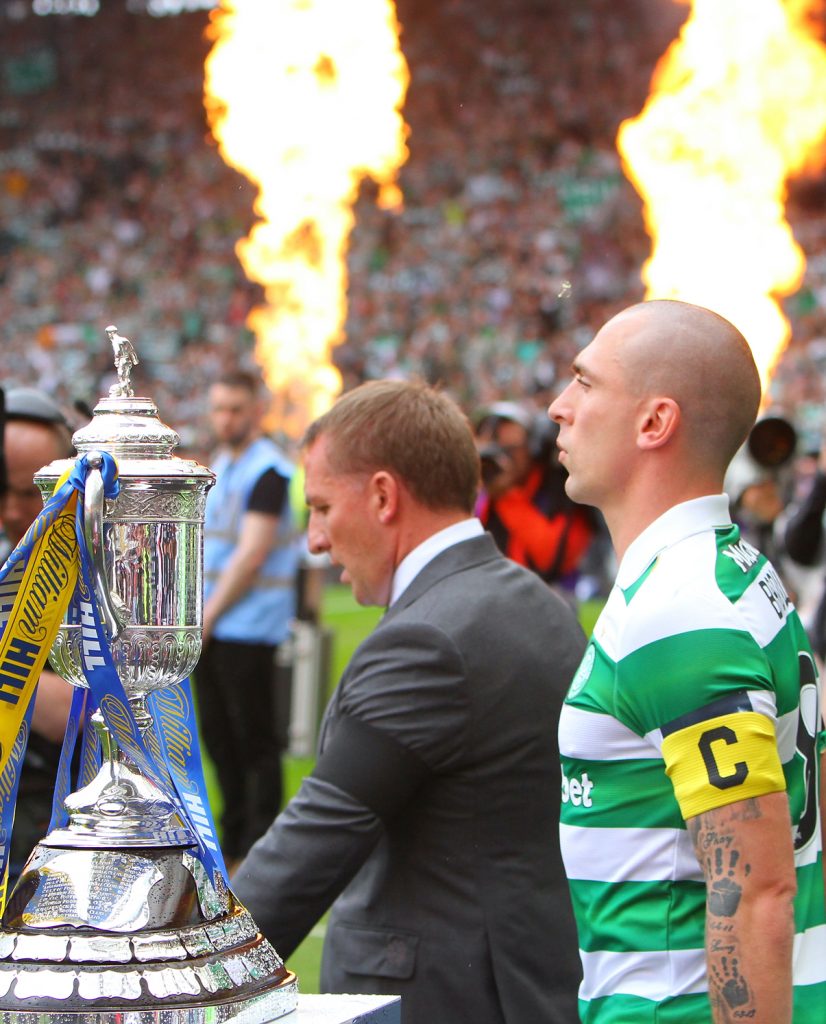 THE INVINCIBLES ARE ON THEIR WAY…Brendan Rodgers and Scott Brown take to the Hampden field for the 2-1 win over Aberdeen in the 2017 Scottish Cup Final, the victory that sealed their historic campaign.

With the Hoops carelessly shedding points to every club apart from Motherwell and Hamilton Accies – a miserable sequence that saw Neil Lennon depart the manager’s job in February – it was a canter for the Govan club as far as the league was concerned.

However, St Mirren knocked them out of the Betfred League Cup with a 3-2 triumph in Paisley and St Johnstone dynamited their Scottish Cup hopes with a penalty-kick shoot-out win at Ibrox.

Brown was Celtic’s onfield leader when they romped through all three domestic trophies in Brendan Rodgers’ debut campaign in 2016/17 to achieve the Invincible Treble and he told the Sunday Mail: “I would rather be in my situation than anybody else’s.

“It does take a toll on everyone’s body. That’s what’s happened this year.

“We gave it everything we could, but we’ve just not managed to get that 10.”

BROWN AND OUT IN NO-SCORE SNORE