ALBIAN AJETI is poised to play in his first Glasgow derby when Steven Gerrard’s Ibrox side arrive at Parkhead on Saturday.

The Swiss striker has been a hit at the Hoops with five goals – including two winners against Dundee United and Livingston – since he joined in summer in a £5million switch from West Ham.

Ajeti suffered a hamstring injury after scoring the second goal in the 3-0 triumph over Hibs and was forced to sit out the 2-0 victory over St Johnstone in Perth seven days ago when substitutes Leigh Griffiths and Patryk Klimala came off the bench to grab the goals in the late, late show.

However, the 23-year-old international should be primed and ready to go against Gerrard’s Govan outfit in the east end of Glasgow where a win for the champions will put them on top of the Premiership with a game in hand.

And former Celt Stephane Henchoz, the ex-Liverpool defender who spent six months at club after being signed on loan by Martin O’Neill in January 2005, has no doubt his fellow-countryman can deliver the goods in the vitally important encounter. 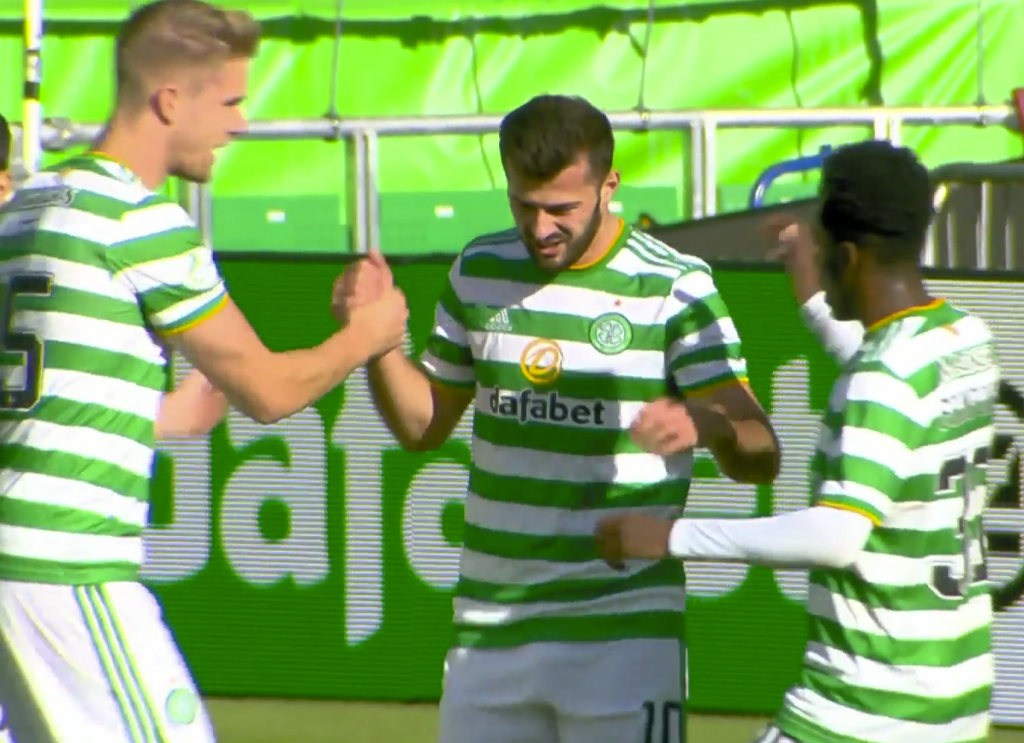 HIB HIB HOORAY…Albian Ajeti is congratulated by Kristoffer Ajer and Jeremie Frimpong after his goal against the Edinburgh side.

The present boss of Neuchatel Xamax, speaking to the Sunday Mail, said: “Ajeti is a strong, powerful striker. And he’s also a goalscorer. I would say he’s a proper penalty-box striker.

“He’s played under pressure before. At Basel, it’s similar to Rangers and Celtic in that there is a demand to win the league every year.

“Ajeti didn’t play that much for West Ham, but, at least, he has experienced it.

“Scoring for Basel in Switzerland is one thing. Playing in the Premier League against the top English sides is very different. That’s why going to Celtic is a good move for him. I think it can kick-start his career.

“When you spend a season not  playing, you need game time. He wouldn’t have got it at West Ham or anywhere else in the Premier League.

“So, he had to go either to the English Championship or a club like Celtic. It’s a good move for him because he can get back to scoring goals and regain confidence.

“He has had a good start and scored a few goals already. It’s too early to know probably if he’ll be that guy who scores 25 goals in a season.