Celtic Quick News on News Now
You are at:Home»Latest News»‘PROUD OF THE BHOYS,’ DEILA
By CQN Magazine on 29th October 2015 Latest News

CELTIC boss Ronny Deila reckons his players have the ability to “bounce back” from setbacks after their 2-1 League Cup quarter-final success over Hearts at Tynecastle.

The holders followed on from the 5-0 victory over Dundee United on Sunday and have now win twice their mauling Molde in the Europa League last week.
Deila said: “We controlled the game very well. We have played three games in six days and I’m so proud of the boys, it was very strong to go out and get a result.’ 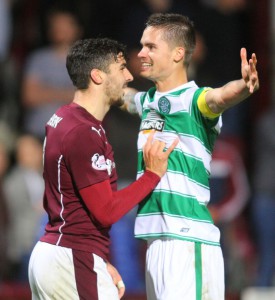 Hearts were difficult opponents to overcome in the first-half, setting up with a sound defensive approach, but the Hoops were able to rely on the striking expertise and creative instincts of Leigh Griffiths who notched a wonderful solo goal and set up the killer second for Tom Rogic.

Deila also had to overcome injuries in the pre-match warm-up by Scott Brown and substitute Gary MacKay-Steven, with the skipper’s place in the starting line-up taken by James Forrest.

The Norwegian said: “We play a lot of games and Gary was feeling a bit in his groin and we don’t take any chances. Broony was feeling something in his knee and we have to see what that is tomorrow.”

Deila added: “Tom Rogic was very good when he came on, to produce some life into the game and we got some chances.

“Griffiths is always sniffing around and you can’t give him an opportunity because he will score.

“It was a good performance by Leigh. He scores in almost every game. He loves scoring goals, he’s a good football player and he works hard for the team. I’m very pleased that we have him.

“We deserved to win, they didn’t have one goal chance before they scored. We were balanced, when we attacked they were wanting to hurt on us on the counter, but that they didn’t do that until we were 2-0 up.

“We’re in the semi-final and we’ll enjoy that, but it’s a big game on Saturday against Aberdeen and it could put us in a good situation in the league. I’m looking forward to what’s coming up.

“We need to perform, we need to be ready. I like the fact the team has shown unbelievable determination, they’ve shown they can bounce back. I’m happy, we’ll keep on going.”