NEIL LENNON watched an x-certificate 90 minutes in Paris this evening as his team were torn apart by the dazzling French champions.

In the end, it was a four-goal mauling and there could be no arguments about the final scoreline which, if we are looking for positives, was better than the 7-1 Champions League embarrassment in Brendan Rodgers’ days.

Of course, the result was largely immaterial and no prizes were handed out for the winner. It’s never easy on the eye to see your team turned over, but everything must be kept in perspective.

Celtic were up against world-class opponents who were ahead of them in their preparatory work with a French Cup Final against St Etienne on Friday to confront.

After only two matches since the 5-0 Premiership win over St Mirren on March 7, this always had the look of a lop-sided encounter and it proved to be the case.

But this was no disgrace in the French capital, despite the scoreline. The third game in five days on French soil was a stretch too far against competitive and committed foes.

Inside one minute, the hosts were a goal ahead and it only took two passes and a clinical finish from Kylian Mbappe to rip the Hoops defence to shreds.

A huge hole appeared between Jeremie Firmpong and Nir Bitton and the ball was fed through for the French wonderboy to stride through before thumping a drive beyond the helpless Scott Bain. 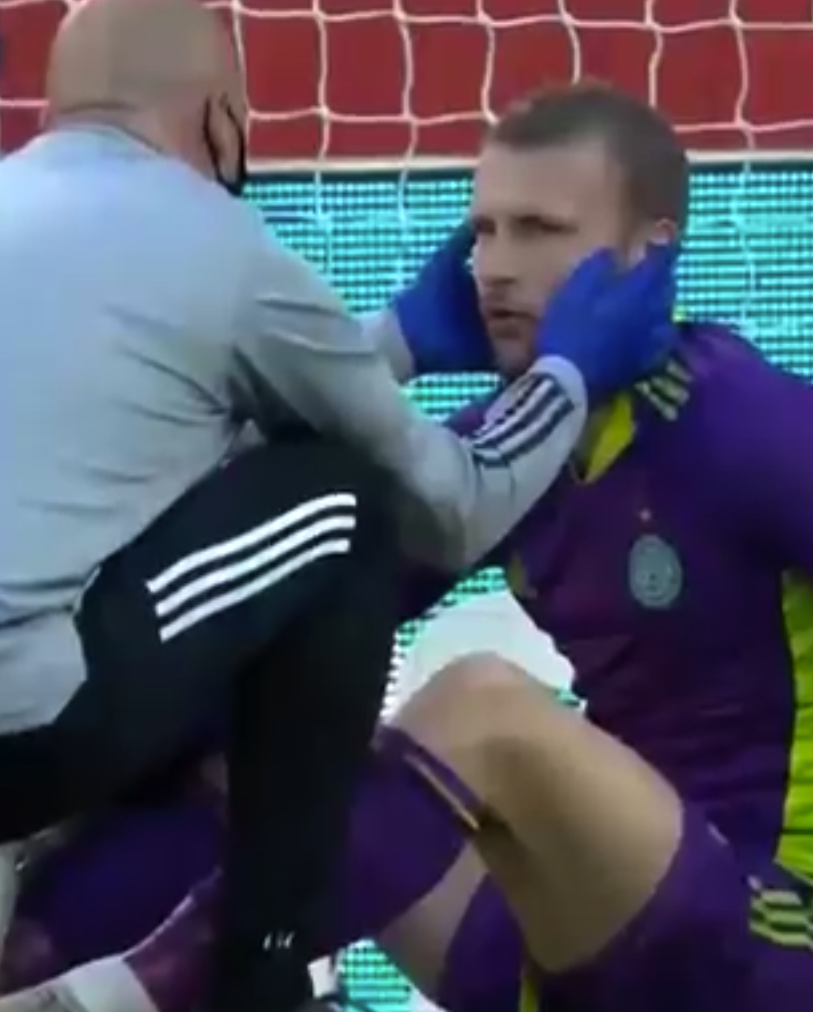 WHAT HIT ME? Scott Bain gets treatment from Tim Williamson after taking a knock in Paris.

The Hoops were getting some joy on the left wing with Greg Taylor forcing on play. The left-back earned a corner-kick in the 13th minute and Ryan Christie’s clever deadball effort was met on the volley by Olivier Ntcham on the edge of the box, but the ball was deflected for another corner-kick that was cleared.

Four minutes later, Odsonne Edouard made a mess of a good through ball from Nir Bitton. He had the opportunity to slip in Mohamed Elyounoussi, but went for glory and his shot was blocked by Thiago Silva.

In the 21st minute, Frimpong showed an electric burst of pace to leave a defender standing, but, unfortunately, his clever cutback was cleared with Edouard lurking menacingly.

Neymar escaped a yellow card when he caught Bitton with a sly kick, but the match official was content to award the visitors a free-kick.

In the 25th minute, the little Brazilian got lucky again when he gave the French giants a two-goal advantage. A scruffy ball over from the right fell to his feet 16 yards out and he swung a right foot at it.

It was heading for Bain’s right as the keeper moved across the line until the shot took a wicked deflection off Bitton and squiremed into the other corner.

Boss Lennon must have wondered while a player of the talent of Neymar was offered so much freedom in his team’s penalty box in the first place.

SO CLOSE…Scott Bain stretches for a low shot which, on this occasion, is just off target.

Like the first goal, it was awful defending from the Scots. Two shots on target, two goals, maximum reward  for the minimum of effort. And Celtic were left suffering.

The Hoops were now being shredded on their left with Taylor, Elyounoussi and Kristoffer Ajer failing to get on the same hymn sheet. However, in the 33rd minute, Olivier Ntcham picked out Edouard, but the striker couldn’t get the ball under control and skipper Silva stepped in to clear.

Khristopher Jullien came close to giving PSG a wake-up call when he got on the end of a Christie right-wing free-kick cross to slam a header against the post with the keeper helpless. How Lennon’s men could have done with a goal at that stage.

A few minutes later, the combination of Callum McGregor and Ntcham saw Neymar have another sly kick at the Frenchman after losing possession. Once again, the ref decided to look elsewhere.

The petulant South American then threw himself into a sliding challenge on Christie to give away a shy which he attempted to claim. Lennon, standing about 10 yards away on the touchline, looked on in amazement at the player’s incomprehensible antics. 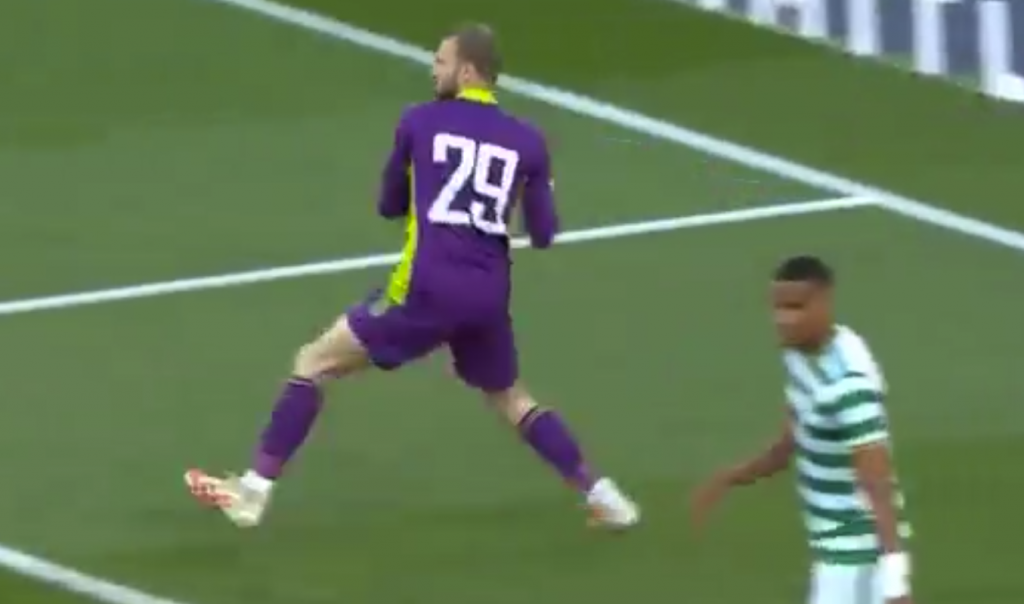 CLEARANCE…Scott Bain prepares to throw the ball to a team-mate.

Three minutes into the second-half, the Hoops surrendered a third goal and once more it was a howler for the defence. Former Manchester United midfielder Ander Hererra was left totally unmarked when a cross came over from the left and he was allowed to fire in a low shot.

Bain looked slow to react as he allowed the ball to elude his grasp. He really should have done better.

Two minutes later, the keeper got a knock on the head as he attempted to cut out a low cross from the right, but, thankfully, he recovered after treatment.

In the 65th minute, Lennon made his first substitution as he put on James Forrest for Bitton. And within 60 seconds the new man almost set up a goal with a good touch across goal, but Christie was too slow to get in position. 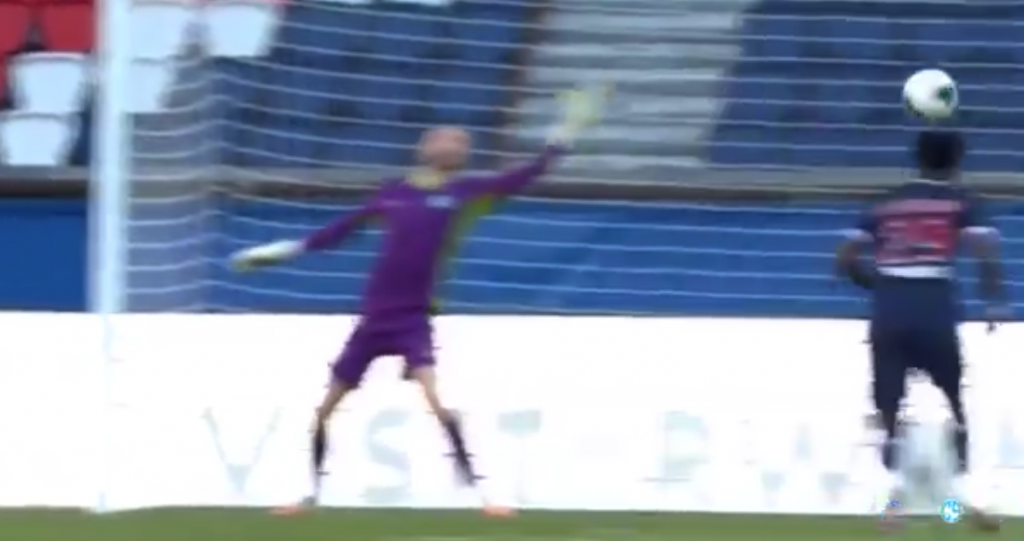 FOUR AND OUT…Scott Bain can only watch as Pablo Sarabia’s drive zips into the net.

Substitute Pablo Sarabia’s timing was perfect when he got on the end of a lobbed pass from Marco Verratti to wallop the fourth goal beyond the static Bain in the 67th minute. At the same time, Lennon introduced Patryk Klimala for Edouard.

Tom Rogic followed for Ntcham while Boli Bolingoli went on shortly afterwards for Taylor in the No.3 berth.

At that stage, it was a work-out for Lennon’s players as they got rid of over four months’ worth of rust.