Celtic Quick News on News Now
You are at:Home»Latest News»PUNDIT’S SIDESWIPE AT LENNY – THEN TIPS GERRARD FOR GLORY
By CQN Magazine on 7th December 2019 Latest News

The Hoops gaffer branded the ex-player’s comments that there were no great players in the Premiership as “idiotic”, as CQN reported during the week.

Clearly, Lennon did not agree with the remarkable assessment of the forward who quit Kilmarnock at the end of last season to seek a career as a media pundit.

Boyd, in his column in today’s Scottish Sun, said: “I can’t believe Celtic brought back Virgil van Dijk from Liverpool this week and I didn’t see the story.

“I also seemed to miss the breaking news that they’d lured Henrik Larsson out of retirement.

“While I’m at it, have Rangers found a time machine from somewhere and got Brian Laudrup and Paul Gascoigne back to Ibrox?

“Because if all this hasn’t happened then I’m not sure what Neil Lennon was talking about with his reaction to my comments on the TV.

“I said there are no truly great players in Scotland right now and, to be perfectly clear, I wasn’t talking about Van Dijk, Larsson or anyone else who USED to play in this country.

“But Lennon came out with the line that managers always use when he said be doesn’t pay attention to pundits! When quite clearly he does.

“That’s even if he didn’t quite seem to get my point.

“And if he thinks Callum McGregor is good enough to play at the highest level for the likes of Barcelona or Manchester City then fair play to him.”

Odsonne Edouard, Fraser Forster, Scott Brown, Ryan Christie, James Forrest as well as McGregor were all dismissed by Boyd, despite their efforts in Europe this season which have seen the Hoops overcome Serie A cracks Lazio home and away, winning on Italian soil for the first time in 13 attempts. 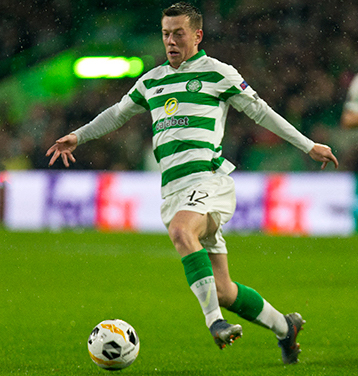 UNDER-RATED…Callum McGregor is dismissed as top-class by pundit.

Boyd, who also played at Ibrox and Middlesbrough in his career, then turned his attention to tomorrow’s Betfred League Cup Final and no-one would be unduly surprised he tips Steven Gerrard’s men to halt the Hoops’ bid for their TENTH successive domestic honour.

He said: “Rangers and Celtic have been tremendous so far this season so I think it promises to be a cracker. Both teams have been in excellent form lately at home and abroad.

“How do I think it’s going to go? Well, for me that will all depend on how the two defences perform on the day.

“Usually in this fixture it’s all about the strikers and who is sharp enough to take their chances when they come.

“But I’ll go the opposite way for this one.

“I think it’s going to be all about how the players at the back perform when they’re under pressure.

“The Rangers centre backs worry me.

“There is a real lack of pace with Connor Goldson and Filip Helander and that’s Celtic’s strength.

“If either of those two defenders drift off and fall asleep then Celtic could take full advantage.

“But this isn’t a time for Steven Gerrard to tinker with that part of his team.”

Looking at the Ibrox side’s 2-2 draw with Aberdeen at Pittodrie in midweek, Boyd added: “I just didn’t see that second-half performance coming after the way they played in the first.

“But maybe it’ll prove to be a blessing in disguise.

“Maybe the fact they took their eye off the ball has happened at just the right time.

“Because there will be a realisation now that if they play like that and draw with a team like Aberdeen, then Celtic will lift another trophy if there’s a repeat.

“I just can’t see Rangers being as sloppy again, which is why I fancy them to lift the Cup.

“Celtic’s domination has to come to an end at some stage and I have a feeling it might just be this weekend.”