Celtic Quick News on News Now
You are at:Home»Latest News»PUZZLE AS CELTIC CONFIRM OLI’S OFF
By CQN Magazine on 1st August 2021 Latest News

CELTIC have confirmed the departure of Olivier Ntcham – despite his contract apparently still having nine months to run.

The French midfielder, who cost £4.5million when he arrived from Manchester City in July 2017, was in his homeland yesterday watching Marseille while his team-mates lost 2-1 to Hearts at Tynecastle at the kick-=off to their Premiership campaign.

Ntcham spent the second part of last season on loan at the Stade Velodrome club who rarely selected him and didn’t take up the option to make the switch permanent.

It was clear he had no future at the club although Ange Postecoglou included Ntcham and Boli Bolingoli in his squad that went to Wales to prepare for the new campaign.

Now, though, the 25-year-old playmaker, has announced his exit from the club, although there is no confirmation of his next destination.

Ntcham wrote on Instagram, accompanied by a picture of a celebration of his winning goal in the Europa League win over Lazio two seasons ago: “I would like to thank everyone at Celtic for the 3 years in half (sic) l was there. 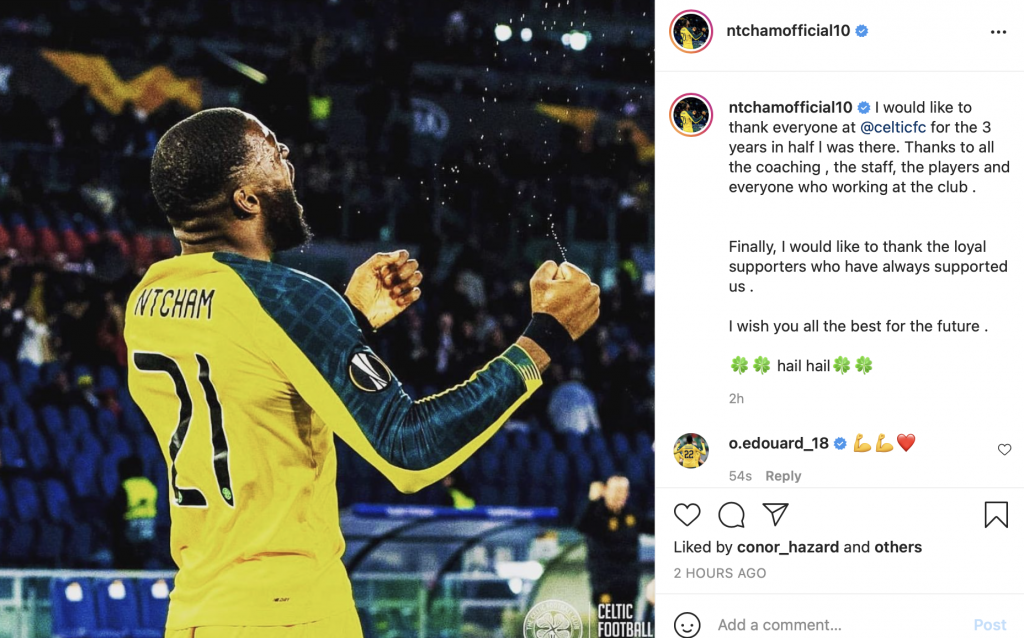 “Thanks to all the coaching, the staff, the players and everyone working at the club.

“Finally, I would like to thank the loyal supporters who have always supported us.

“I wish you all the best for the future.”

Celtic admitted the player had left and said in a brief statement: “The club can confirm that Olivier Ntcham’s contract with Celtic FC has come to an end.

“Everyone at the club wishes Oli nothing but success for the future.”

It’s a puzzling situation because it was understood Ntcham would not be allowed to go without a fee and the transfermarkt site shows the player has until May 31 2022 before his terms are concluded.

Portuguese giants Porto and AEK Athens have both expressed an interest in the former Etihad prospect in the past.