Ironically, the defender replaced his old Celtic pal Kieran Tierney in the fading moments of a rousing performance by Steve Clarke’s team that brought down the curtain on Group F with a victory courtesy of goals from John Souttar and Che Adams.

Ralston, who celebrates his 23rd birthday today, played in an unaccustomed role on the left wing, but immediately fitted into the shape of the team as he helped see his country over the line to secure a home game in the play-off semi-final in March in the Scots’ bid to make the Qatar Finals in a year’s time. 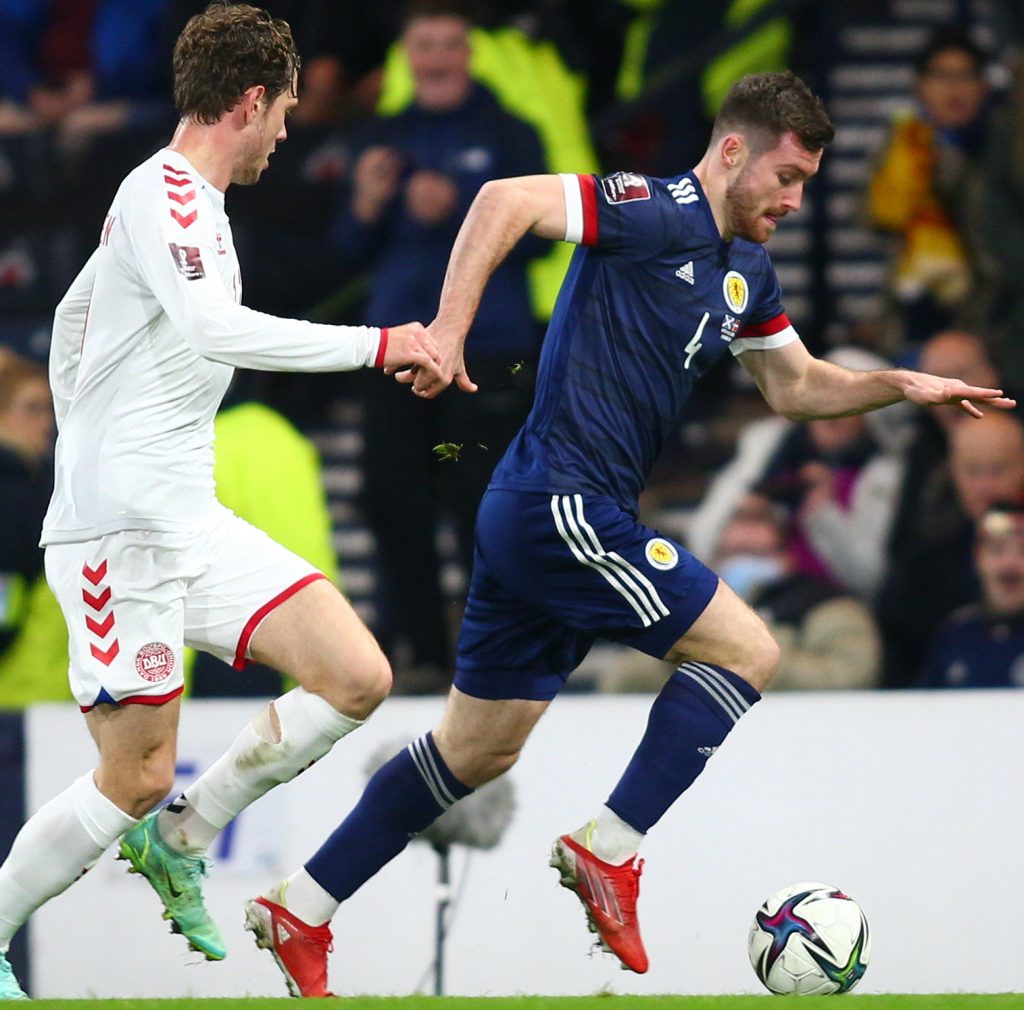 ON THE RUN…Anthony Ralston races away from a Danish opponent as he makes his full Scotland debut.

Callum McGregor played the entire 90 minutes and put in his anticipated solid display in the anchorman role that has made him a key member in Clarke’s line-up. David Turnbull remained on the subs’ bench.

The Danes had been unbeaten in their last 26 qualifiers for World Cups and European Championships and had won all of their nine matches in Group F before they toppled to defeat in Glasgow.

Clarke’s team have now been triumphant in six consecutive competitive games for the first time since winning six Home Nations matches in a row between March 1928 and February 1930.

A beaming Scotland gaffer, speaking to Sky Sports News, said: “I get criticised for not smiling enough, but if you can’t smile after a performance like that there would be something wrong with me.

HAMPDEN HEROES…Callum McGregor joins in with the celebrations after Che Adams had netted the crucial second goal at Hampden. John McGinn and Scott McKenna also enjoy the moment.

“I’m delighted everything came together. We played good football on the front foot to try and win the game. It’s a good night for us. I knew the players were confident and they showed it.

“We had to dig in, but we defended well although the legs went a bit towards the end. A great night with a great atmosphere.

“It was important to get the home semi-final. I took a little risk playing the boys who were on a yellow card, but we wanted to finish on a high. We had a chance to win six competitive games in a row which isn’t easy to do. The boys wanted to do it and they showed it on the pitch.”

Hearts centre-half Souttar headed in the opening goal in his first international appearance since being sent off in a 2018 defeat by Israel.

Southampton powerhouse frontman Adams, who had worked hard all evening, hammered in the killer second goal near the end after being released with a superb through ball by another ex-Celt, Stuart Armstrong.

On Friday week, the Scots will be one of 12 countries who will go into three play-off paths for one-off semi-finals on March 24 and finals on March 29. The three path winners will qualify for the Finals.