Celtic Quick News on News Now
You are at:Home»Match Report»RANGERS 1 CELTIC 0: UNLUCKY 13 AND THE END OF AN ERROR
By CQN Magazine on 29th December 2018 Match Report

CELTIC blundered into a minefield of mistakes at Ibrox this afternoon as 13 proved to be unlucky for Brendan Rodgers and his players.

It was a dire and dismal display from the champions as the Irishman sampled defeat for the first time in the Glasgow derby after 10 wins and two draws in the previous games.

It was a day where the likes of Scott Brown, Dedryck Boyata and Oliver Ntcham couldn’t pass the ball 20 yards without it being misplaced. The Frenchman, in particular, had a performance to forget where he did little right throughout a mishap-strewn 90 minutes.

To be fair, Rodgers’ plans were thrown into disarray when he had to replace defenders Filip Benkovoic and Mikael Lustig with Kristoffer Ajer and Anthony Ralston before the start of the second-half, but this was way short of the standards expected of Celtic.

Now they are level at the top of the Premiership with the Govan outfit with a game in hand and they squandered the opportunity to give themselves some breathing space going into the winter break. 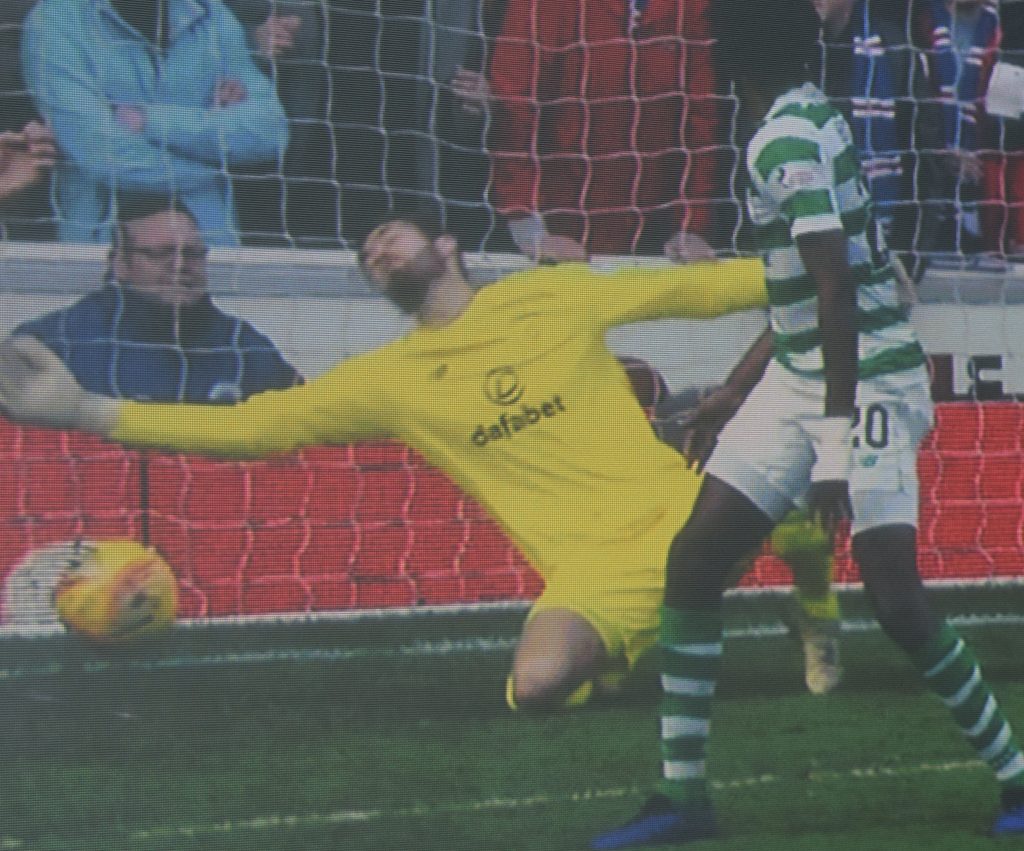 OOPS, HOOPS…Craig Gordon is left helpless with a deflection off Scott Brown as Dedryck Boyata looks on.

It says it all about an fairly awful showing that goalkeeper Craig Gordon was the team’s best player with a string of excellent saves. Some of his team-mates in front of him should have been ashamed at the lack of protection he was afforded.

Celtic were strangely lethargic and struggled to find their range, tempo or rhythm as they allowed their opponents to dominate the midfield.

They paid a heavy price on the half-hour mark when Steven Gerrard’s team took the lead with a goal that owed a lot to massive good fortune.

Mikael Lustig sold himself as he attempted to block a cross from Ryan Kent on the left touchline. The winger shaped to cross before cutting inside and passing the ball into the tracks of Ryan Jack.

His team-mate sidefooted the ball goalwards from 12 yards and it was well covered by Craig Gordon to his left before it took a nick off Scott Brown’s left heel and changed direction. The Hoops keeper was left helpless as the deflection zipped in at his right-hand post.

It was a horrible goal to concede, but, in truth, the champions had been living dangerously in the opening period with a lot of careless passing and very little penetration on the left where Scott Sinclair, hat-trick hero against Aberdeen in midweek, looking subdued against James Tavernier. 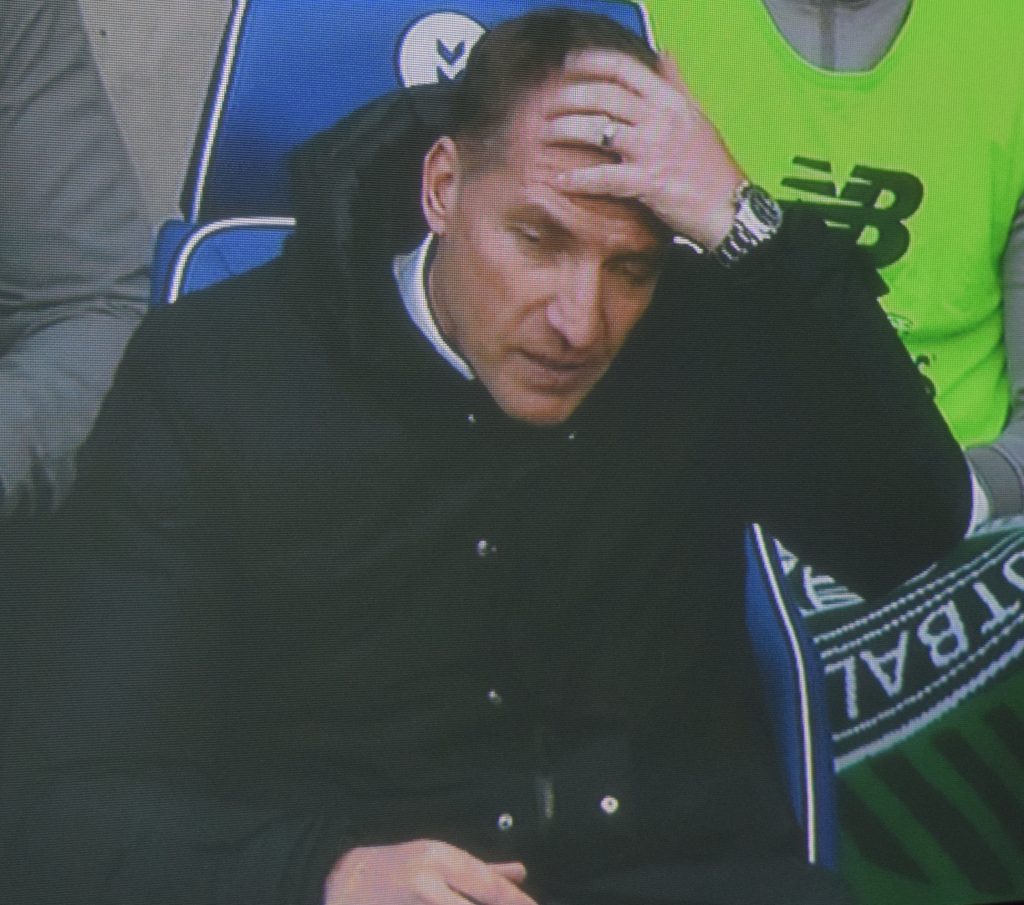 HEADACHE…Brendan Rodgers is not impressed with his team’s performance.

James Forrest had his team’s solitary effort on target in the first 45 minutes early on after a nice exchange between Ryan Christie and Mikey Johnston presented him with the opportunity. He fired it low to Allan McGregor’s left, but the keeper got down well to divert the shot to safety.

Gordon had been forced into two saves before the home side penetrated his barrier. Again, Kent was given far too much time on the left in the 16th minute to send in a dangerous cross and Daniel Candeias was gifted a look at goal from 10 yards.

The Portuguese forward took his shot first-time and the Hoops No.1 spread himself to block the effort and Callum McGregor completed the clearance.

A minute later, there was pandemonium in the penalty box as the Celtic defenders tried to clear a cross and Dedryck Boyata, under pressure from Ross McCrorie, only half-cleared and the ball was returned with Connor Goldson given clear sight of goal from six yards.

The central defender guided a header low towards Gordon’s left-hand, but the shotstopper acrobatically threw himself full length to push the ball away.

There was another scare for the Parkhead men when Brown, under pressure from Alfredo Morelos as he defended a right-wing corner-kick from Andy Halliday, deflected a header onto the junction of bar and post before it was hastily cleared. 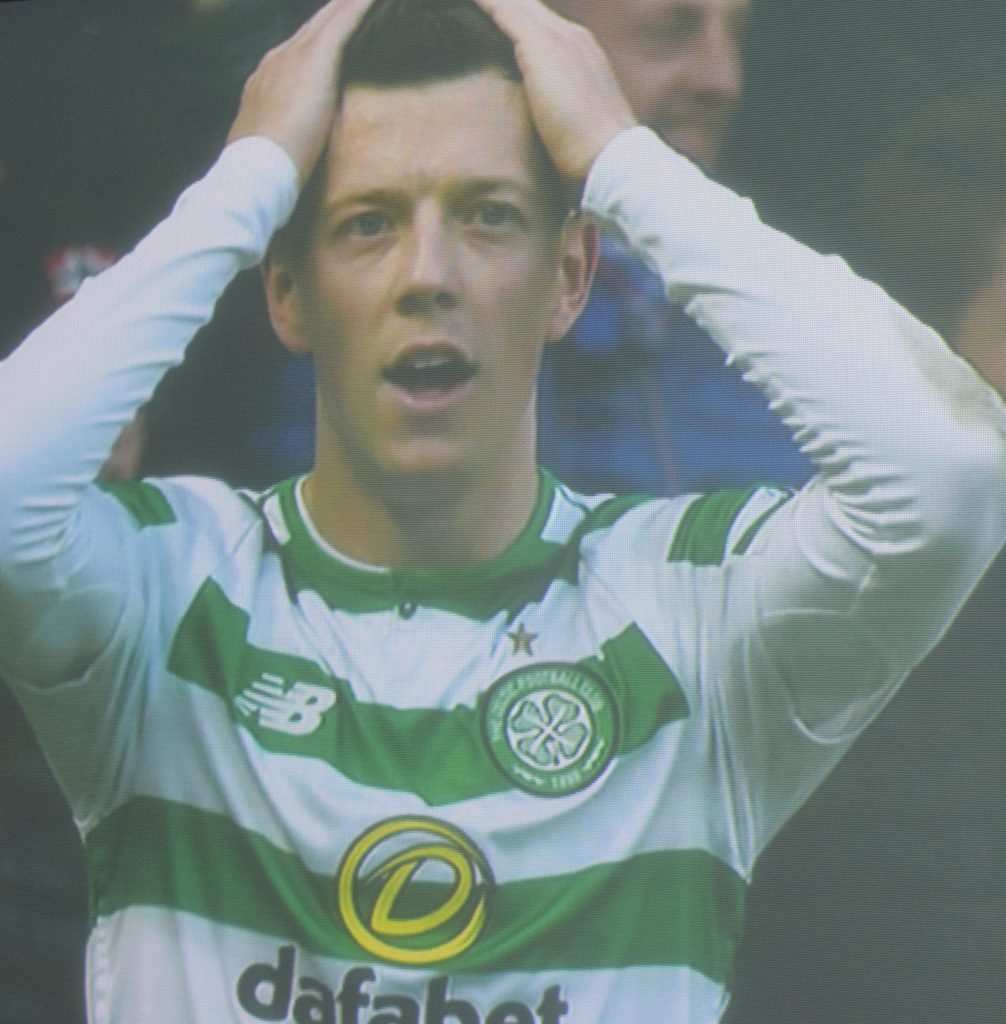 OH, NO…Callum McGregor can’t believe his ‘goal’ has been chalked off.

Celtic weren’t allowed to get into their stride by opponents who snapped into every tackle and looked more up for the battle in front of their frenzied support, starved of success in so many games against Celtic in the recent past.

Referee John Beaton looked to be in a lenient moood when he merely awarded Celtic a free-kick when Alfredo Morelos had a sly kick at Brown in the third minute. He turned a blind eye to that incident and again much later when the Colombian clearly got involved in an off-the-ball infringement with Ralston. The whistler had a good view of both happenings, but decided, rather bizarrely, to keep his cards in his pocket.

That being the case, Lustig might have expected similar treatment when his momentum carried him into Candeias just before half-time. No such luck for the Swede who was immediately booked. Ajer and Brown followed him into the book while Andy Halliday contrived to get a yellow card for taking his time at a throw-in.

The unfortunate Lustig was clearly hurt when he took a knee in the back when he was challenged for a high ball by Halliday and it was no surprise he was replaced by Ralston at the start of the second period. Benkovic had already gone off with what looked like a hamstring injury just before the turnaround with Ajer replacing him.

Two minutes into the second-half the Hoops continued to get involved in unenforced blunders when Gordon’s loose distribution to Boyata was seized upon by Kent, but the keeper redeemed himself with a smart save and the Belgian defender got back to sweep Scott Arfield’s effort off the line.

Eight minutes later, the defence could not clear a routine ball into the box and Jack almost claimed No.2 with a low angled drive, but Gordon showed great awareness as he got down to paw it to safety.

The inevitable substitution happened on the hour mark when Odsonne Edouard came on for Johnston who had tried desperately hard not to let the game pass him by, but, to be fair to the teenager, he got very little meaningful service from a toiling midfield. 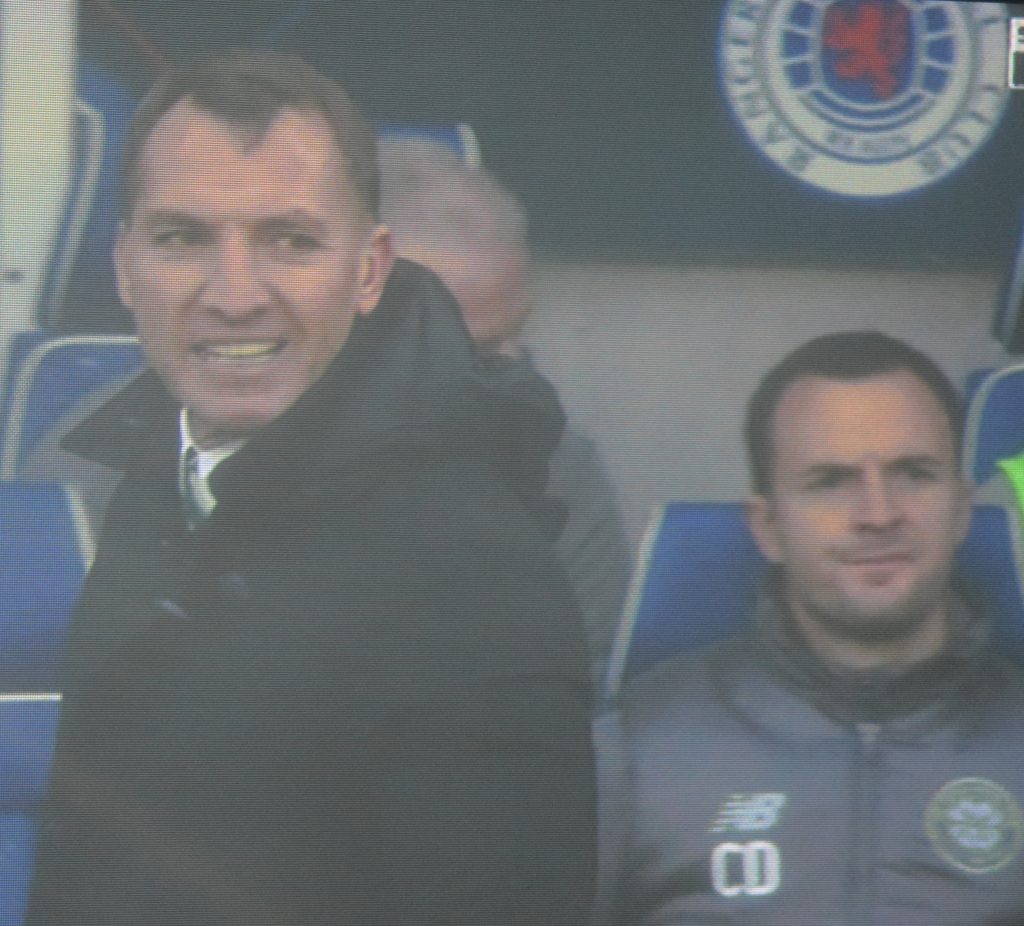 DISBELIEF…Brendan Rodgers watches in dismay as Celtic toil at Ibrox.

Rodgers changed things around by putting Sinclair inside to support Edouard and Forrest switching wings, but, alas, to no avail. Celtic continued to present possession to the opposition with monotonous and alarming regularity.

This was about as sloppy and slipshod as the Celts have been since the arrival of the Irishman and Gerrard’s team were in the mood to accept every gift that came their way.

In the 67th minute, it looked as though the champions had pulled level when Callum McGregor beat his namesake Allan with a crisp low shot after some good work by Christie, but the farside linesman waved for offside. It was tight, but the visitors did not expect to be given the benefit of the doubt on this particular trip across Glasgow.

It was to turn out to be Celtic’s last real chance before Ntcham had a drive diverted by Halliday near the end. It was an afternoon to forget. To be bossed by a team containing the likes of Halliday, McCrorie, Arfield and Jack is deeply worrying and rightly concerning and shows there is much work to be done when the season restarts.

Brendan Rodgers’ buying power and astuteness in the January Sales will now be put to the test.