THE colossus that is Cameron Carter-Vickers pushed Celtic towards their tenth title in eleven years after an epic performance at Ibrox this afternoon.

Not only did the on-loan Spurs central defender score the winning goal that handed the Hoops a six-point advantage with only six games to play, but he put in a defensive masterclass against Giovanni van Bronckhorst’s desperate team.

The US international star walloped in the winner three minutes from half-time and then performed heroics as Ange Postecoglou’s side made sure they did not allow their rivals back into the encounter.

This could very well turn out to be the game that sees the Parkhead men lift their 52nd flag in their glorious history and Carter-Vickers played a pivotal role in a victory that could net the club a £40million Champions League jackpot.

The dependable back-four performer added his weight and height to a Filipe Jota free-kick after the hard-working Giorgos Giakmoumakis had been wiped out by John Lundstram on the left wing following a wild challenge.

The Portuguese ace flighted in a deep cross to the back post where Carl Starfelt and Leon Balogun jostled for the ball. It broke towards Carter-Vickers who wasted no time in drilling a low left-foot drive past Allan McGregor.

The 700 Hoops fans in the stadium yelled in delight as the ball nestled in the opponents’ net – and the others realised any hopes of a second successive championship triumph had been well and truly obliterated.

NICE AND EASY DOES IT…Tom Rogic keeps his cool as he slots in the leveller. 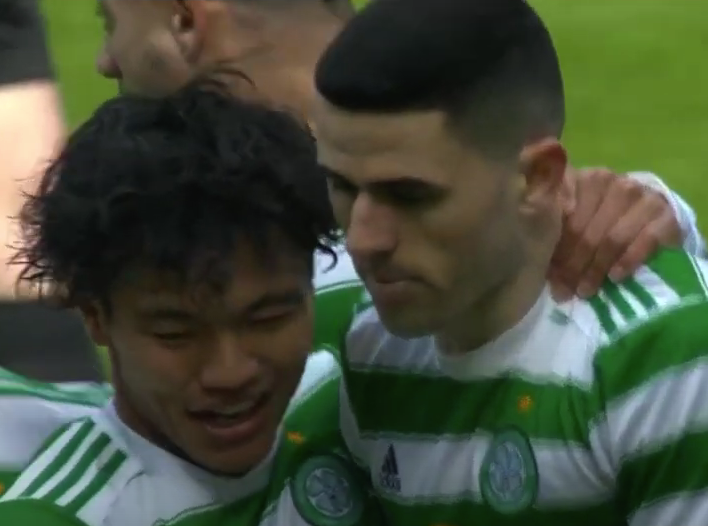 THAT’S MY BHOY…Tom Rogic is congratulated by Reo Hatate.

Every Celtic player performed to their absolute best and it is impossible to pick out a particular man of the match, but skipper Callum McGregor hardly put a foot wrong and there were immense displays from Carl Starfelt, Greg Taylor and Daizen Maeda, who was non-stop from the moment the game kicked off.

The visitors, though, presented the home side with the opening goal in just three minutes when Josip Juranovic allowed Ryan Kent space in behind him on the left wing and the flanker was afforded time to pick out Aaron Ramsey smack in front of goal and the on-loan Juventus ace couldn’t miss as he tucked the ball behind the exposed Joe Hart.

At that stage, the Parkhead side could have folded in an intimidating atmosphere, but they rallied magnificently to level matters in the seventh minute.

Captain McGregor played an inspirational role as he raced past two challenges into the box before delivering a cross which was deflected to Reo Hatate.

The Japanese midfielder’s measured shot was pushed away by Allan McGregor to his left and the rebound was snapped up by Tom Rogic.

HOOP HOOP HOORAY…Tom Rogic is congratulated by his Celtic team-mates.

The Australian playmaker sized up the situation in a heartbeat and cleverly tucked the ball into the inviting net.

Any hopes the home side had of an upset were extinguished there and then. The Hoops took control and there was only one outcome.

That was delivered by Carter-Vickers before the turnaround and Postecoglou’s men did not release their stranglehold on the proceedings for the remainder of the outcome.

The start of the second-half was delayed after broken glass had to be removed from Hart’s goalmouth after a moron had thrown on a bottle. Only a remarkable reflex save from McGregor prevented substitute Liel Abada adding a third goal in the 82nd minute,

The Israel winger had replaced Jota in the 77th minute along with David Turnbull who came on for the unfortunate Matt O’Riley at the same time. 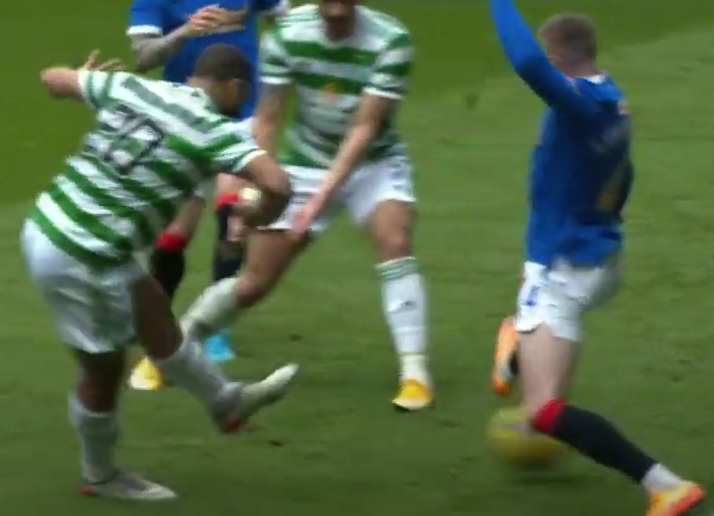 BY THE LEFT…Cameron Carter-Vickers slams in the winning goal.

The Danish Under-21 international was introduced in the 62nd minute for Hatate, but was forced off after a heavy and wayward challenge from Joe Aribo.

Nir Bitton came on for Rogic while Anthony Ralston replaced the limping Taylor as Postecoglou reinforced the team to make ceratin the advantage was not allowed to slip away.

Hart was required to make one save – low to his left after a shot from Fashion Sakala – as Celtic saw out the game in a thoroughly professional manner.

The crown is heading home.