Celtic Quick News on News Now
You are at:Home»Match Report»RANGERS 4 CELTIC 1: McGREGOR OFF AS FATE TAKES OVER
By CQN Magazine on 2nd May 2021 Match Report

IN the space of exactly one minute and 16 seconds Celtic’s fate was decided at Ibrox this afternoon.

Their season against Steven Gerrard’s side was encapsulated in a whirlwind moment when they struck the crossbar, lost a goal to go behind and had a player ordered off.

There is no argument the Hoops have had reason to curse their luck against their Glasgow rivals during a wretched campaign and once again Dame Fortune positively snarled in their direction in the fifth and final game in in this most recent sequence.

On 24 minutes and 28 seconds, Scott Brown, in his farewell to the fixture, robbed Joe Aribo to set Mohamed Elyounoussi in motion. The Norwegian international showed ambition and determination as he took off for the home side’s danger zone.

He picked up pace before thundering in a superb 30-yarder that looked destined for the net until Allan McGregor got the merest of touches to the ball to flick it onto the face of the crossbar.

It rebounded to safety and the ball ended up in the Hoops net in 25 minutes and 44 seconds. It was a mesmerising and cruel turn of events. 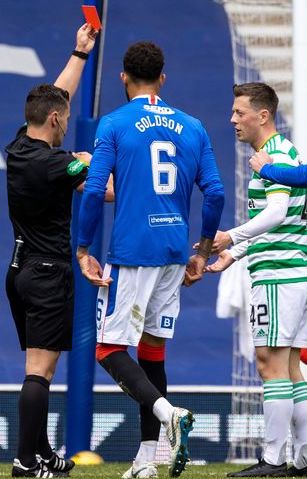 Ryan Kent too easily got away from Brown as the home side retaliated. A chance was blocked and McGregor, booked moments earlier for a challenge on Kent, threw himself to help on the clearance. He clattered into Glen Kamara who hit the deck as referee Nick Walsh, making his debut in the fixture, waved play on.

The ball broke kindly again to Kent who fired in a shot from the edge of the box and Kemar Roofe reacted quicker than Kristoffer Ajer to get his chest to the ball and deflect it past Scott Bain.

Walsh then returned to the earlier McGregor tackle to show a second yellow card and it was game over for the vice captain.

That moment typified everything that has gone wrong for Celtic in these matches with their opponents lapping up the luxury of getting every break that is possible.

However, in the 29th minute there was a glimmer of hope when keeper McGregor clawed away a right-wing cross from Jonjoe Kenny that brought a corner-kick on the left. David Turnbull swirled an inviting effort into the box, Ajer rose highest to knock it back across goal and Odsonne Edouard materialised two yards from the line to thump a header into the net. 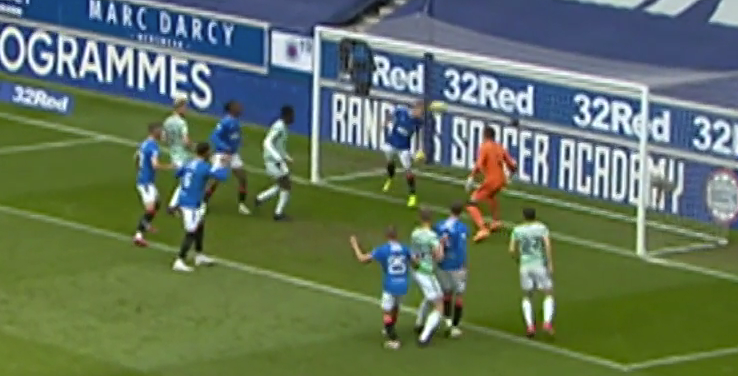 PICK IT OUT…Odsonne Edouard thumps in the leveller. 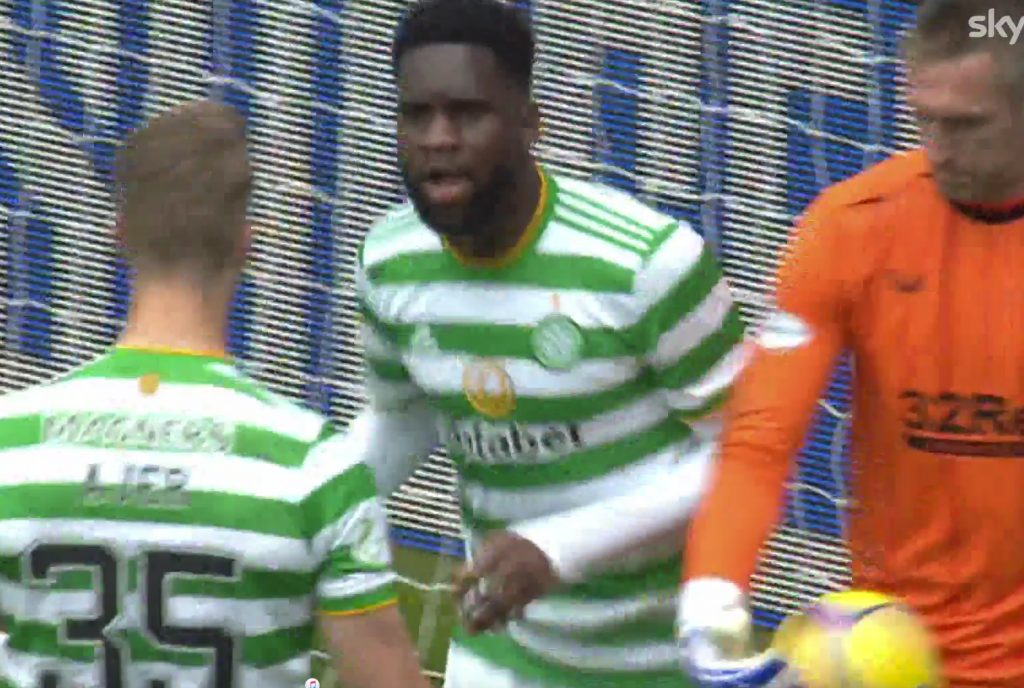 In the 32nd minute, the Hoops were behind again and once more Gerrard’s side took advantage of the situation. Alfredo Morelos, coming in from the right, tried to nutmeg Brown. It didn’t quite work, but the ball struck the skipper’s heel and fell kindly for the frontman.

The Colombian lashed a left-foot drive at goal and Ajer ducked out of the way as Bain was beaten by the sheer power of the shot as it flew into the roof of the net. The keeper, though, will know he should have dealt more professionally with the drive.

IN THE NET…Scott Bain allows the shot from Alfredo Morelos (extreme right) to fly over his head for the second goal.

Five minutes from the interval, 10-man Celts blew the opportunity of drawing level when a 40-yard run by Ajer saw the ball drop at the feet of James Forrest in a great position. He could have lashed a right-footer at goal, but elected to turn inside and his weak left-foot shot was deflected past for a fruitless corner-kick.

The second-half saw Forrest brought in to partner Edouard in the middle which offered Borna Barisic the freedom of the left wing with no-one covering the space when he went forward.

In the 55th minute, Turnbull, who had been putting in a good shift, squandered a brilliant opportunity to equalise.

Celtic put together a good move that saw Forrest clear on the right and he picked out his unmarked team-mate six yards from goal. The delivery was perfect and Turnbull swooped to get his head to the ball and miserably fail to hit the target with an attempt that flew harmlessly wide of McGregor’s right-hand post. 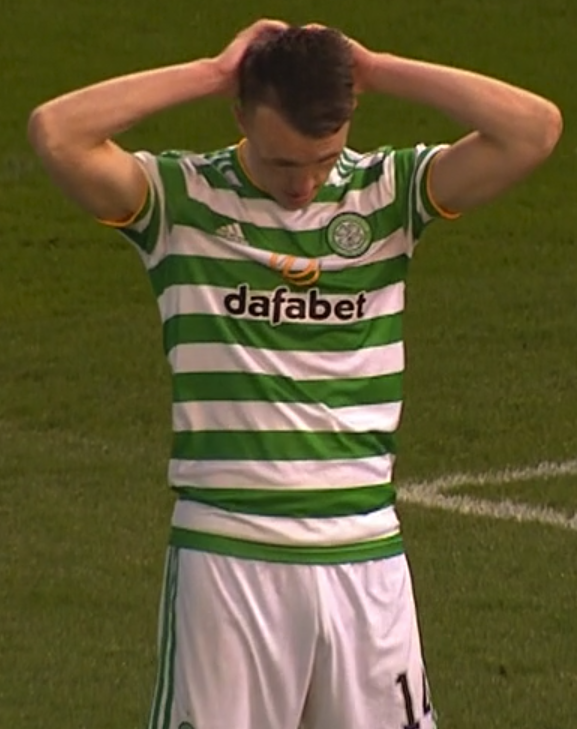 OFF TARGET…David Turnbull missed an excellent opportunity to make it 2-2.

Once again, the Hoops were made to pay when the home team scored a third goal two minutes later. Some awful defending allowed Barisic the time and space to fire in a left-wing cross, Ajer failed to cut out the danger and Roofe easily nodded wide of the exposed Bain.

Three minutes later, Brown’s participation in these fixtures came to a disappointing conclusion when he and the tiring Forrest were replaced by Ismaila Soro and Ryan Christie.

Celtic continued to gift possession to their foes while some cumbersome defending was making Kent look like Messi in his prime. And any time the Englishmen hit the turf, Walsh, reading from the same sheet as Madden and Co, was quick to award a free-kick. It was a monotonous ploy by the Ibrox player to go down when anyone touched him.

The visitors were fairly inept in one-v-one situations, the threat from Greg Taylor on the left wing was nil and Kenny wasn’t much better on the right. Bain’s distribution often surrendered possession to Gerrard’s team as the game limped to a graceless finale. Of the many problem positions the incoming manager has to solves, the No.1 spot must be high on the priority list. 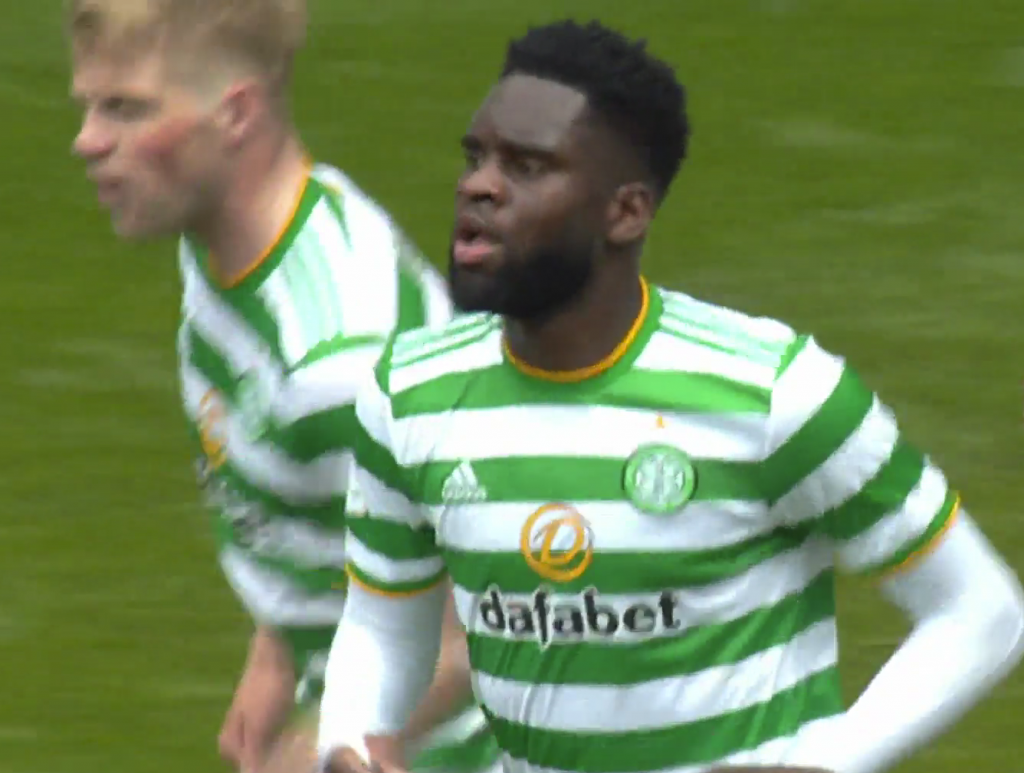 A MOMENT OF RELIEF…Odsonne Edouard and Stephen Welsh after the goal.

Edouard, who had passed up an earlier opportunity after once again indulging himself with an extra touch, was hauled off in the 75th minute with Mikey Johnston making a rare appearance.

Five minutes later, Ajer embarked on one of his breathtaking solo surges, but just when it looked as though he was about to score the goal of the century, he took a rush of blood to the head and his wayward attempt probably dropped somewhere in Paisley.

Two minutes later, Elyounoussi headed past from four yards following a Kenny delivery and the script was written for Jermain Defoe to come off the bench and score in stoppage-time.

The veteran beat Stephen Welsh far too easily in the box as the youngster got it all wrong and then the veteran rolled the ball beyond a transfixed Bain.

As the ball tucked in the back of the net, a horrible run of results came to an excruciating end.

This really has been the season of a thousand cuts.