RAGING Neil Lennon ripped into his under-performing Celtic players and accused them of “laziness” as they dropped two crucial points in the 2-2 draw with Hibs at Easter Road.

A crazy challenge from Scott Brown on Martin Boyle presented his former club with a penalty-kick with the game goalless seven minutes after the turnaround.

Scott Bain pushed away Kevin Nisbet’s effort, but Kristoffer Ajer was the only team-mate to respond as the ball bounced clear and Jamie Murphy pounced to rattle in the rebound.

Six minutes later, some appalling and unacceptable defending and ball-watching from Nir Bitton, Jeremie Frimpong and Ryan Christie gifted Jack Ross’ side a second goal when Murphy was unchallenged to head a long diagonal free-kick from Stevie Mallan into the path of Nisbet, running clear on the left.

He was given a head-start by the dozy Israeli defender while Frimpong stood anchored to the spot. The striker angled a shot across Bain into the far corner of the net. The keeper will know it was a horrendous goal to lose.

It was a catalogue of calamities from the champions as they carelessly shed points that could have a massive impact in their bid for the historic 10 in a row at the end of the season. On this occasion, a late penalty-kick from substitute Odsonne Edouard – only his seventh goal of the season – and a stoppage-time strike from Diego Laxalt prevented the Hoops from flopping to a second Premiership loss of a stuttering, turbulent campaign. 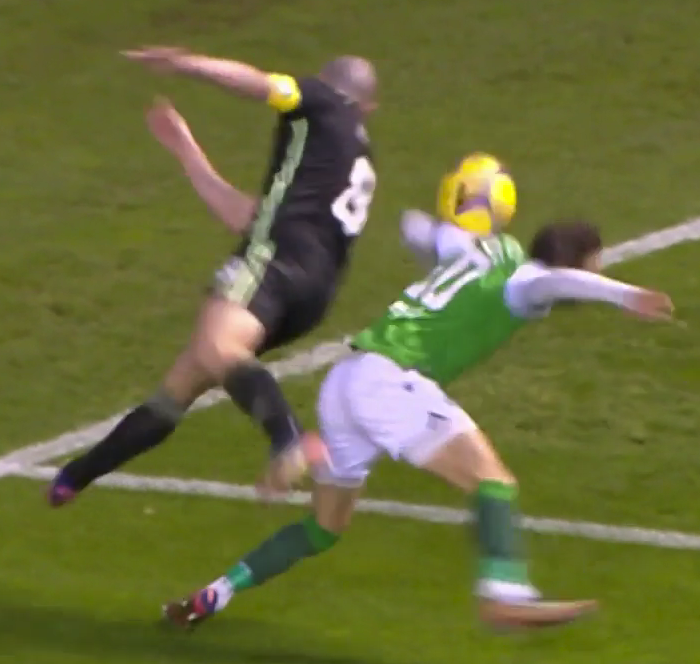 BRAIN-FREEZE…skipper Scott Brown barges into Martin Boyle to present Hibs with a penalty-kick.

A fuming Lennon, speaking to BBC Sportsound, said: “Really disappointed with the goals we gave away, totally unnecessary.

“I thought we had decent control of the first-half, but lacked a bit of oomph, worked the goalkeeper a couple of times, but we weren’t penetrating enough.
“We had brain-freeze for five or 10 minutes. Really poor decision from Scott, don’t know where that came from, and then a really awful second goal. Lazy, free header and then not tracking the run.

“For 25 minutes, we found our mojo and got back into the game and got a point that’s probably not enough at the minute.

“We needed more and the players need to have a look at that. It’s a mindset thing more than anything else.

“The second goal was awful. It’s just people standing watching. We’ve given him far too much room to get the shot off, it’s slack as anything.

“I put that down to laziness and a lack of concentration.

“We have to be far more on point with defending. I don’t know if we’ve lost a bit of hunger, but we need to get that back quickly. I saw plenty of it in the last 20 minutes, but we need to do more to win the game.