ERIK SVIATCHENKO has admitted he will be “really interested” if the right sort offer came along to tempt him from Celtic Champions League foes FC Midtjylland.

The Danish international central defender has been linked with a dramatic return to the Parkhead club, as CQN reportedearlier this month.

Brendan Rodgers’ Invincible, part of the squad that swept all before them in the unbeaten 2016/17 campaign, appears to be on Ange Postecoglou’s wanted list during the summer revamp.

The middle of the rearguard was a problem position for the Hoops last season with several permutations put in place with Neil Lennon and interim gaffer John Kennedy rotating the likes of Stephen Welsh, Shane Duffy, Kristoffer Ajer, Christopher Jullien, Hatem Abd Elhamed and Nir Bitton in moves that unsettled the team’s rhythm.

Sviatchenko was bought by Ronny Deila for £1million in January 2016, but returned to Denmark in 2018, sold for the same fee. He won two league championships, two League Cups and a Scottish Cup during his stint in Glasgow.

Asked about the possibility of a return to Celtic, the 29-year-old centre-back answered: “It is always difficult to comment on such rumours. We’ll see what happens. 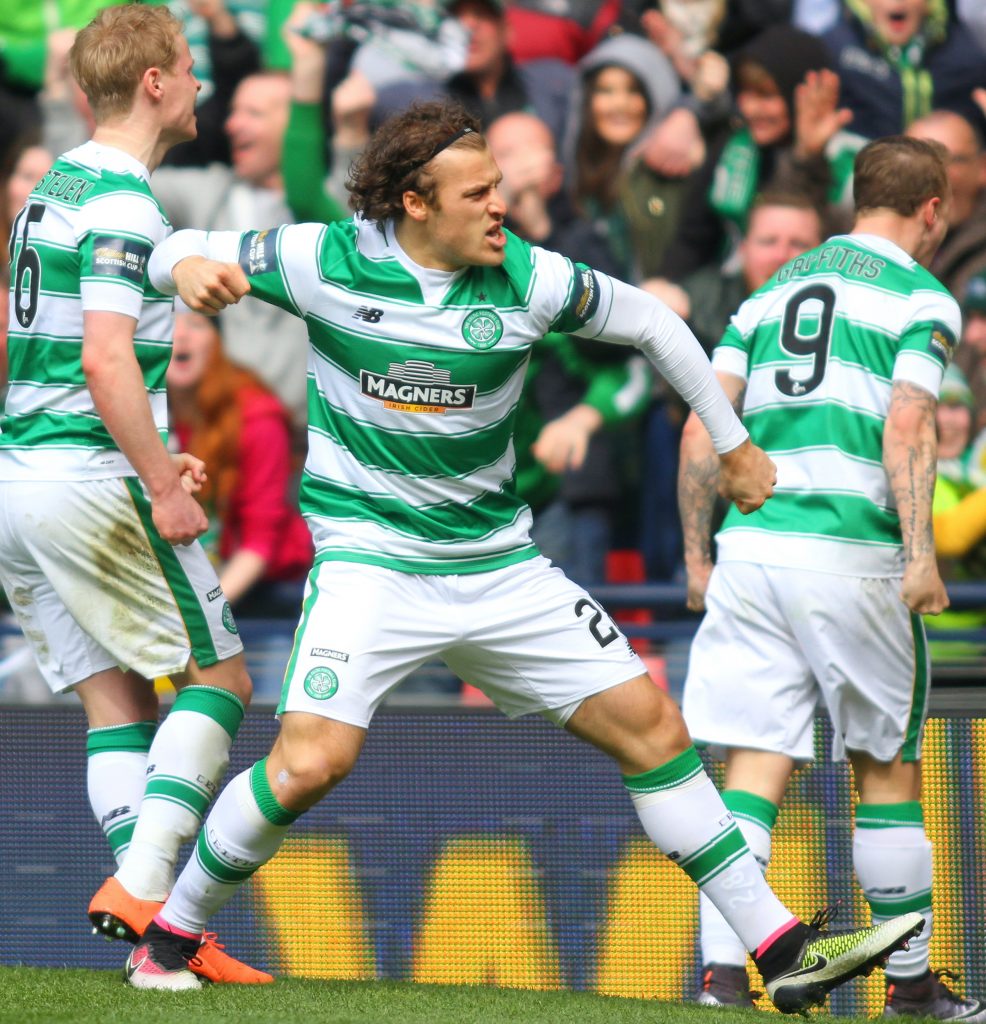 HOOPY DAYS…Erik Sviatchcnko celebrates a goal with Gary Mackay-Steven and Leigh Griffiths joining in during season 2015/16.

“It’s a cool club, but I actually do not know more than it says. Then we have to see if there is anything in it.”

Sviatchenko, who has lifted two titles since re-joining FC Midtjylland, revealed there is an agreement in place with the Danes if an offer comes into the club that interested him.

He told Danish outlet Tipsbladet: “I know I have played at a super high level through three seasons now and am in my best football age for a central defender.

“I have a huge experience both internationally and from different squads, experience as a leader, so you cannot just find that player everywhere.

“Of course, I also understand that Midtjylland is really happy that they have me, but we have also had a clear agreement and indication that when the right thing comes, I also get the chance for it

“But there must also be that interest. And the interest is there, but it has to go up in a higher level.

“That’s why I always find it hard to comment on rumours. In two weeks there is suddenly something and then it is a new situation. It may also be that there is nothing.

“But I have told my people that if the right thing comes, then, of course, I am really interested.

“And, if not, then I have also indicated that I am obviously motivated and ready for new times. So we have to see how it develops.”

Svitachnko is due back at Parkhead on July 20 in the first leg of the Champions League second round qualifier while the second game is due eight days later.