AFTER Saturday’s comfortable 3-0 home win over Inverness, Celtic had the distinction of being the most on form side in any domestic league in European football.

Six clubs around Europe could match Celtic’s perfect record of six wins from six, none can beat Celtic’s better goal difference and some lost their straight wins record in matches yesterday.

Brendan Rodgers has made a remarkable start to managing Celtic towards their sixth straight Scottish Premiership and on this form his side is unstoppable. 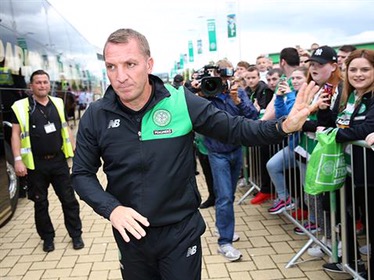 The Champions go into the international break a whopping ten points clear of the SPFL head bridesmaid Aberdeen and with a game in hand. Celtic have also beaten Aberdeen home and away as well as securing wins against all the other sides in the league.

Only a late and hugely undeserved equaliser by Inverness Caley Thistle in September has stopped Celtic having a 100% record in the Scottish Premiership this season. Celtic did put Inverness to the sword on Saturday with a comfortable 3-0 home win at Celtic Park.

And not only are Celtic not dropping any points, since Craig Gordon came on as a second half substitute against Kilmarnock, he hasn’t lost a single goal in domestic football, making him European football’s clean sheet specialist.

The other sides keeping up with Celtic by recording six straight domestic wins are led by Bulgarian side Ludogorets Razgrad who recorded a 2-1 home victory over CSKA Sofia on Saturday.

Next up on Saturday’s list was Celtic’s old Portuguese friends Benfica but their winning streak came to an end yesterday in a 1-1 draw at Porto.

It was even worse news for France’s form side Nice who suffered a shock defeat in Normandy with the home side Caen taking the points in a 1-0 victory.

Newcastle United’s 2-1 home victory over Cardiff sees them jump to third spot in this mini league table, which adds a little bit of excitement since Celtic are so far ahead of the rest on Scottish football.

Meanwhile over in the Serbian Superlega Backa Palanka couldn’t stop form side Napredak, ho won the the Saturday lunchtime content by 3-1 while on Friday evening in the Earste Divisie in the Netherlands Almere kept their wins record going with a hard fought 1-0 victory over Achilles’29.

Here’s how the table looked on Saturday evening. We’ll keep an eye on this over the coming weeks. 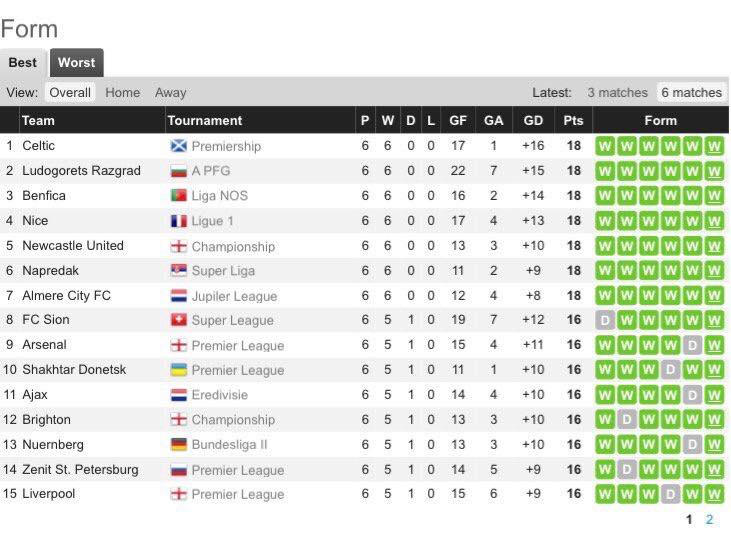