Celtic Quick News on News Now
You are at:Home»Latest News»‘REFEREE WAS AGAINST US,’ MOANS LAZIO BOSS
By CQN Magazine on 8th November 2019 Latest News

LAZIO boss Simone Inzaghi moaned about the “referee being against us” as the Italians went down 2-1 to Celtic at the Olympic Stadium last night.

And then the sore loser admitted he hoped Neil Lennon’s men could do him a favour to get the Serie A side through to the knock-out stages of the Europa League next year.

The champions – with two games to play against Rennes in Glasgow and Cluj in Romania – are already through after earning 10 points from four games, including back-to-back victories over the much-vaunted Italians.

The Hoops came back from losing an early goal to level in the first-half with a screamer from James Forrest before claiming the winner in stoppage-time with Olivier Ntcham’s deft flick over the keeper.

Cluj, who beat their French opponents 1-0 last night, have nine points, Lazio three and Rennes one. 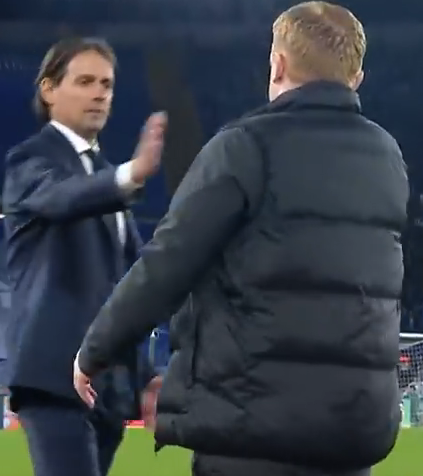 SHAKE ON IT…Simone Inzaghi and Neil Lennon at full-time.

Inzaghi, speaking to the Daily Mail, said: ‘There is still hope. Celtic have beaten us home and away so maybe they will be able to beat Cluj in Romania and we have to win against Rennes and Cluj.

‘We hit the post, their goalkeeper saved a lot and we also had the referee against us because at 1-1 there was a clear penalty for us that wasn’t given to us, so it could have changed the game.’

The Italian gaffer was talking about a shot from Ciro Immobile that struck the arm of centre-back Christopher Jullien as he attempted to block a shot from the team’s star striker who had opened the scoring in the seventh minute.

The Frenchman’s hand was not in an unnatural position and it was clearly ball to hand and not vice versa. Greman match official Tobias Stieler, who had a strong game, didn’t even consider a spot-kick as he correctly waved play on.

Rearrange the following into a well-known phrase or saying: STRAWS CLUTCHING AT.