ROY GREENSLADE has this evening produced a designer graphic and has attempted to pass it off as the ad copy that CQN submitted to The Guardian on Friday 27th May 2016. CQN has attempted to contact Mr Greenslade all day via Twitter, email and by telephoning him at the newspaper and the University where he lectures in journalism. He has not responded to any of these attempts to reach him.

Remarkably he has produced a snippet of the second page of a designer’s early working on the SECOND advertisement we had booked in the Guardian for Saturday 4th June, which was produced for ideas on design etc and which does not contain any relevant text. 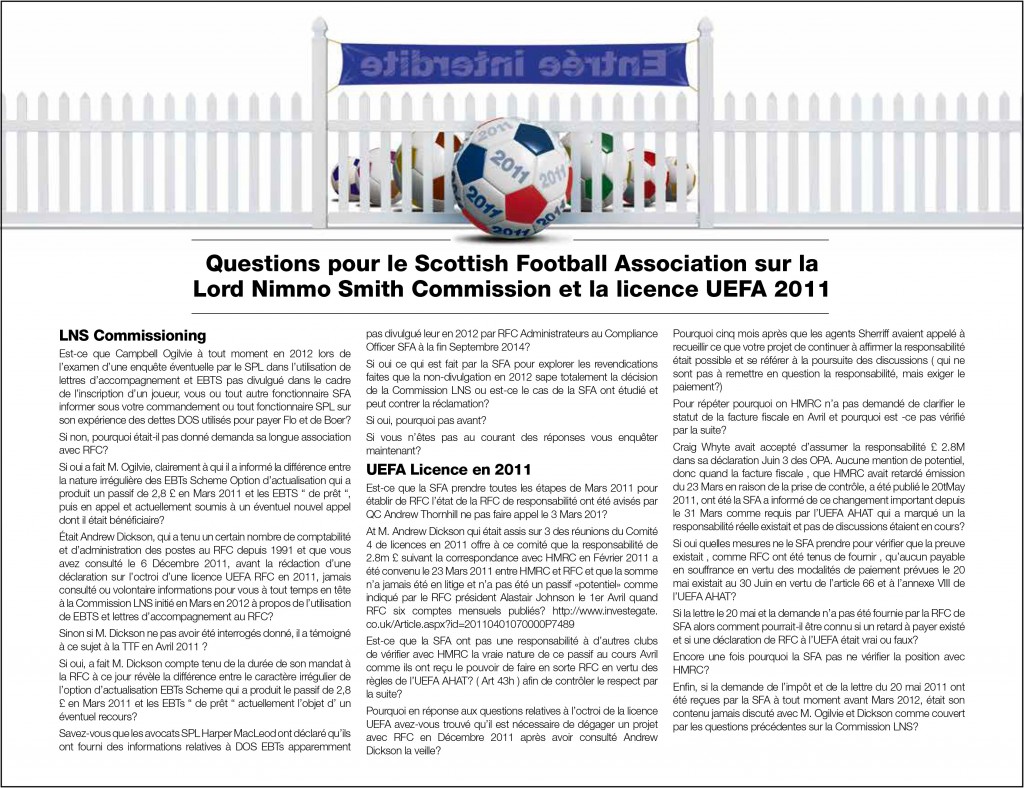 The first page of this designer designer graphic had an English heading and the second page a French one. The rest of the text was in scrambled text for an example of how the proposed design might look.

The designer’s working was also in colour – the advertisement that the Guardian asked to see on 27th May was in black and white as per the newspaper booking. This was NOT the Ad copy that was submitted by CQN and rejected by the Guardian on 27th May.

Note too the mention of Senior Management interference in the email of 2nd June 2016 from the chap at the Guardian who initially booked in the ad.

Mr Greensdale is deliberately misleading people. He may choose to reveal where he received this designer’s working from and why he cut off the text – in no language at all – and omitted to say that the first heading was in English.

He also knows, as does everyone working in the media or advertising, that this was never a black and white ad submitted to the Guardian for publication.

This was NOT the ad, it was NOT submitted as the ad and it had two versions with the first example heading in English for the English newspaper Greenslade works for. We note too that he chopped off the text in his entirely misleading second article of the day.

This morning CQN spoke to the Guardian manager who cancelled that ad on 27th May and he confirmed that both ads submitted were the English version ads included in the email correspondence below.  We asked Greenslade to contact his colleagues to check these emails and to confirm that the ads were submitted to his newspaper in English.

We have been asked on social media to re-produce the emails between CQN and The Guardian on this matter and are happy to do so. Here they are, with only the relevant names removed. 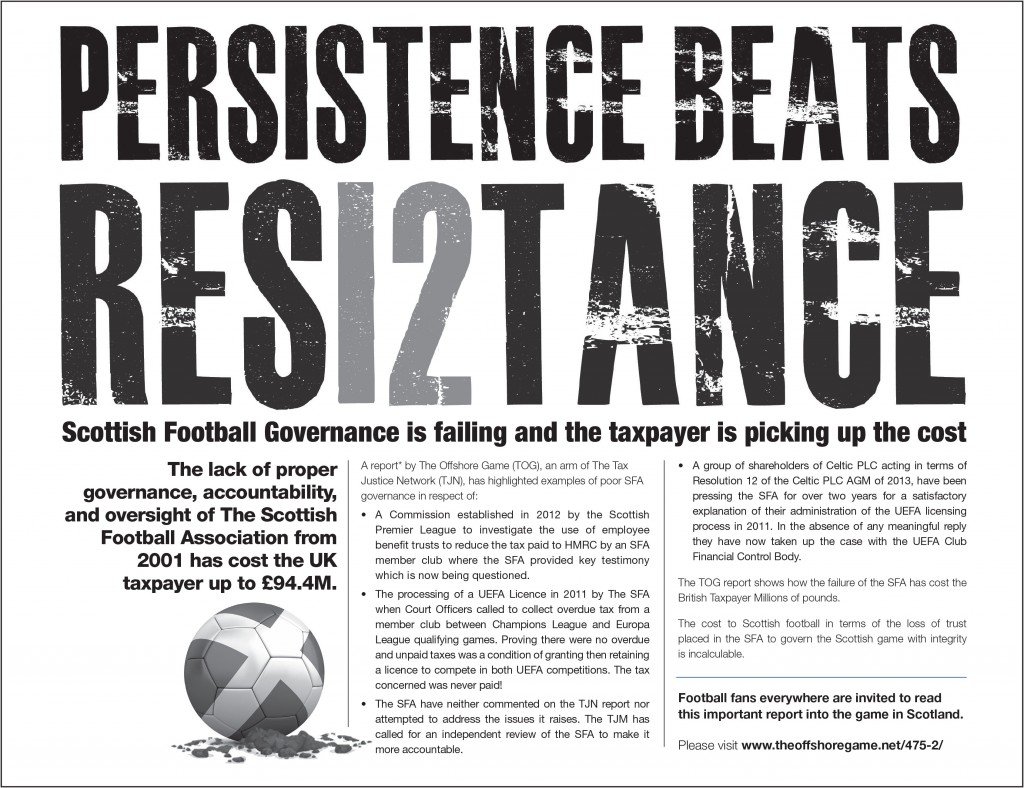 On 27 May 2016 at 16:55  CQN wrote:
SUBJECT: PRINT AD
Did you receive the proposed ad that I sent over?
Over 800 people have contributed to the crowd funding and tens of thousands more support this across almost all clubs in Scotland.
We had contributions from Hearts, Aberdeen and Dundee United.
When we ran an ad in Sunday Herald on 25 January 2015 the paper sold out everywhere.
If we can purchase 100 copies of Wednesday’s paper at the trade price that would be great.
We will send these copies abroad.
Best wishes
On 27 May 2016, at 17:14,  GUARDIAN wrote:
SUBJECT: PRINT AD
Yes we did indeed. Thanks for sending it across.
However, I regret to inform you that adverts such as this get reviewed by our editorial board and as such they’ve decided not to carry the advertisement on this occasion. We therefore will be cancelling the booking this end with no monies due.
We will of course reimburse you in full and this has been actioned by myself already; it will be with our accounts team who will be making the necessary transaction as soon as possible.
Regards,
On 27 May 2016 at 5.20 PM CQN wrote:
SUBJECT: PRINT AD
Can you tell me the reason why the ad has been refused?
There was no reply that day.
On 31 May CQN spoke to the executive on this matter then sent this email at 11.27 AM
(The Guardian executive indicated that there may have been a change of heart and asked to see the updated version of the ad that had been sent to the Swiss newspaper).
Revised ad below. This will appear in Tribune de Geneve tomorrow.
best wishes 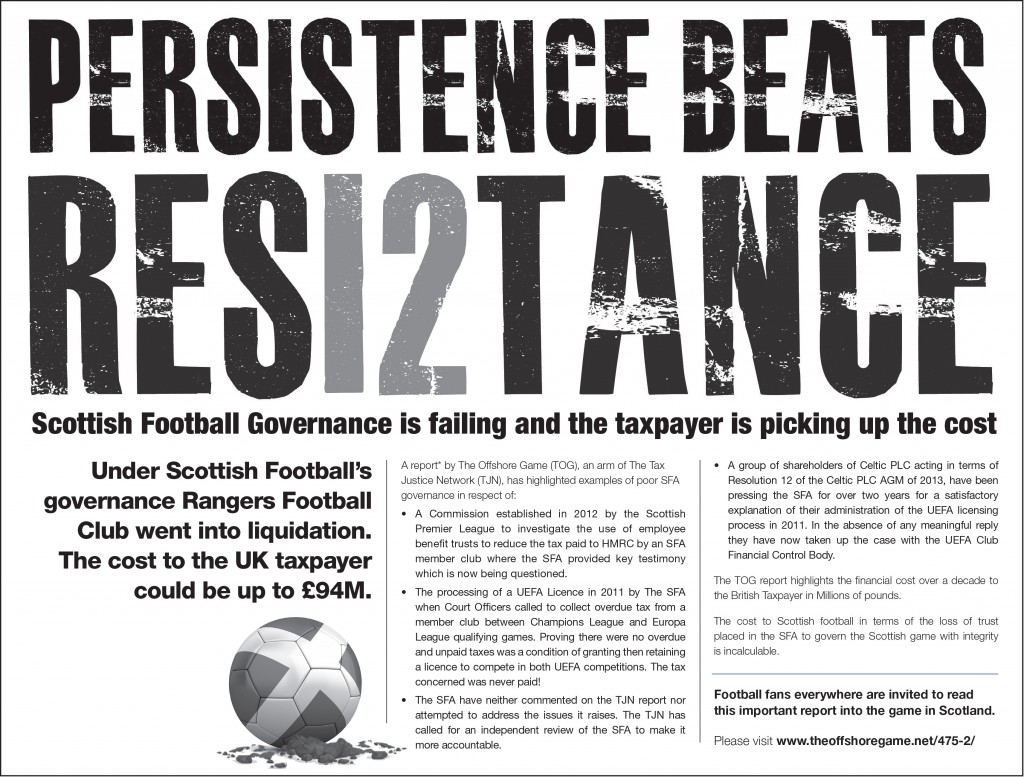 On 1st June 2016 at 9.44 AM CQN wrote:
SUBJECT: CQN Ad, The Guardian and Tribune de Geneve URGENT
Further to our telephone conversation yesterday re the booking we had for today’s Guardian, and also for our second ad which is scheduled for this Saturday.
Our ad was approved by The Tribune de Geneve and has appeared in today’s edition on page 7.
I enclose a photograph of the cover of today’s edition and of the ad itself within the paper. These images have been sent to me by a CQN reader in Geneva. 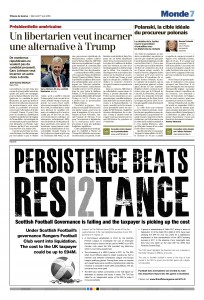 The purpose of our activity is to support a submission from Celtic shareholders, which is also backed in separate communication officially from Celtic FC PLC, which arrives at three Officers at  UEFA today.
We wanted to advertise in The Guardian today and again at the weekend to support this submission arriving ..
Accordingly unless we can get the two half pages which we have paid for in The Guardian within the next seven days, and have that agreed today, then we really need to ask you to return the funds paid in good faith today (as you promised last Friday), so that we can promote elsewhere.
If the ads do not appear in the next seven days then there is frankly no point and no value to be achieved. 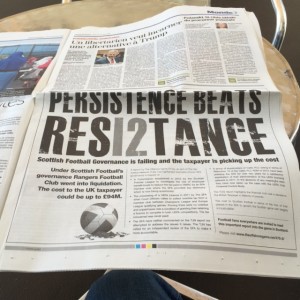 I have had extensive pressure yesterday on this and have been asked to clarify with you as a matter of urgency. We do have other media outlets waiting who have no problem with the text…
If there is further delay then I would be faced with issuing over 800 refunds and working out exactly what proportion would be due etc.
I understand that The Guardian had the right to reject the copy or cancel the booking. However the ‘half way house’ that we are currently in doesn’t work for us.
We have raised this money in good faith and need to use it in media this week. 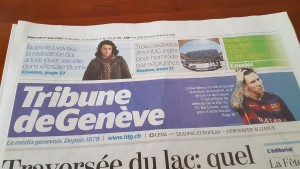 You will probably find you sell more copies in Scotland today as some people will not have heard the news that the ad has been delayed, or pulled.
If we can agree a way forward re the ads today that is acceptable. If not can you return the funds by close of business today?
best wishes
No reply was received from The Guardian and the Executive did not return CQN’s telephone calls that day, we did speak with his colleague who initially took the advertising booking from CQN.
On 2nd June 2016 at 9.44 AM CQN wrote to the Sales Executive who initially agreed the ad booking:
SUBJECT: REFUND
As discussed last night we are disappointed that the Guardian have decided not to run the advertising space that we booked and paid for.XXX assured me on Friday when making this decision known that the money would be returned immediately.I spoke to him on Tuesday after the bank holiday and he seemed to have changed the position, suggesting it might run.I have been unable to reach him since then but we spoke yesterday and you confirmed that the decision had been taken at a senior level and that was that.While this is fair enough, we asked for the money to be returned by close of business last night.That never happened but you said that it was being processed.

It has still not arrived…

On 2nd June 2016 at 5.27 PM CQN wrote to the Executive who cancelled the booking:
SUBJECT REFUND
I am disappointed that the funds have not been returned today and that I have not had any further update on this.
As I said the Guardian is frustrating our plans and my continued silence on our website is compromising my own position.I have outlined this to you.Can you advise why the money has not been returned?
On 2nd June 2016 at 5.27 PM GUARDIAN (chap who initially booked in ad) wrote:
SUBJECT: REFUND
I have forced this through our top dog in Accounts and can confirm the payment has been processed.
Once again I am sorry for the inconvenience. I did not foresee that Senior Management would step in the way they did.
Regards,

SUBJECT: REFUND
I got your email last night re the refund being processed but I am distressed to note that the payment has not been received.
This entirely destroys our media plans for this weekend and it is increasingly looking like a deliberate ploy by your senior management.Please confirm the status of our funds urgently or I will have no alternative to publish an article on this on Celticquicknews.co.uk which is the biggest Celtic supporter site and where the money came from.People have a right to know what is happening here.
The funds were not returned until Wednesday 8th June 2016. CQN then reported back on the situation.