THE GUARDIAN have today been misleading readers who asked questions about the newspapers decision not to carry an advertisement on Resolution 12 on Wednesday 1st June.

Yesterday we reported back to Celtic Quick News and in particular those who contributed to crowd funding this initiative on the facts surrounding the Guardian’s decision to cancel our two advertisements. CQN did not offer our opinion on the matter, we simply reported the facts.

Others in the online football community in Scotland including Scottish Football Monitor, Clumpany, James Forrest at Celtic Blog and Videocelts have all written opinion pieces and have been critical of The Guardian’s decision. 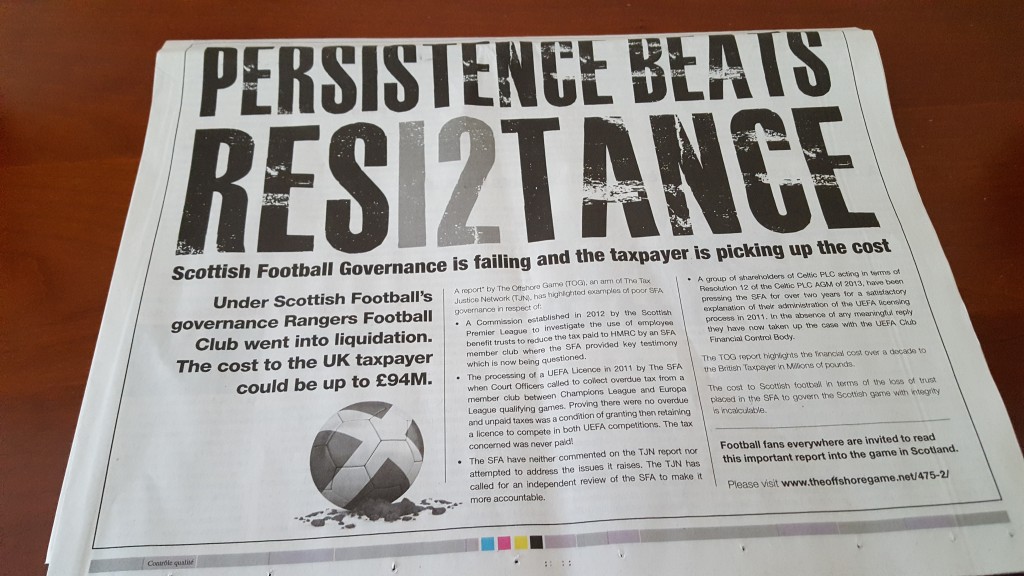 This morning Channel Four’s Alex Thompson started asking questions and many other journalists have been in touch too.

The Herald Group, of course, also refused to carry any Resolution 12 advertisement, despite initially pitching for the advertising business. They also never saw the text until it was published by the Tribune, that fearless newspaper in Genéve.

Helen Hodgson from the Guardian Readers’ editor’s office has been replying to queries today apparently saying this:

“Thank you for your email.  The advert you refer to was booked in before copy was seen, which is not unusual.  When the first advert came in (in French) it was reviewed and the decision reached was that the tone and content were not in line with our advertising terms and conditions. When a second part of this advertising campaign came in (this time in English) it was also declined.

We remain committed to impartial sports reporting; acceptance or refusal of advertising does not in any way reflect our editorial position. Readers remain free to pitch stories to our editorial desks.

Here is the Guardian News and Media  statement:

“All adverts submitted for publication are considered on a case-by-case basis to assess suitability for publication according to our advertising terms and conditions. The Guardian reserves the right to reject adverts at our discretion. Either the acceptance or refusal of advertising does not in any way reflect our editorial position.”

When this response to queries from The Guardian was brought to the attention of CQN we contacted the Guardian’s senior manager who had informed us of their decision to cancel the booking. He confirmed that the advertisements sent to him – and they were sent to him and no-one else – were in ENGLISH.

CQN crowd funded the advertisement and which was scheduled to appear in The Guardian on 1st June – the day of the SFA’s AGM – and again on 4th June where alternative copy would have been used pointing at the Lord Nimmo Smith enquiry.

The Statement was also booked into the Tribune de Genéve for the day of the SFA AGM and this advertisement, like the Guardian’s booking, was paid for in advance.

The Swiss newspaper saw no reason to object to the Statement and certainly had no concerns over the text being in English. Maybe they are more European than the Guardian?

The Guardian were sent two slightly different designed version of the Statement. The graphic designer is a well known Celtic supporter who is active on Twitter, @cartujakds – the copy was designed by him and sent to CQN as PDFs. Both versions were in ENGLISH.

The Guardian only received the copy as a designed advertisements in ENGLISH, as The Guardian have confirmed when challenged by CQN this afternoon.

At no stage was this statement given to the Guardian in FRENCH. Indeed the Resolution 12 text was NEVER translated into French as a decision was taken to publish the statement in the Swiss newspaper in English as this was the common language of the UEFA officials receiving the submissions from Celtic shareholders.

Anyway would they ban an advertisement if it was written in French? Really?

Maybe the truth about Scottish football is just too uncomfortable for them to reveal, even when being paid to do so?

The Resolution 12 Statement was in English and NEVER in French.

Here we have a newspaper happy to make things up while being afraid to tell the truth.

Or plenty of people will start to think that The Guardian is Unbelievable.