After years of silence on the subject, within hours of the ad appearing SFA Chief Executive Stewart Regan was addressing the issue. His position is best explained in the James Forrest post on his Celtic Blog yesterday afternoon. 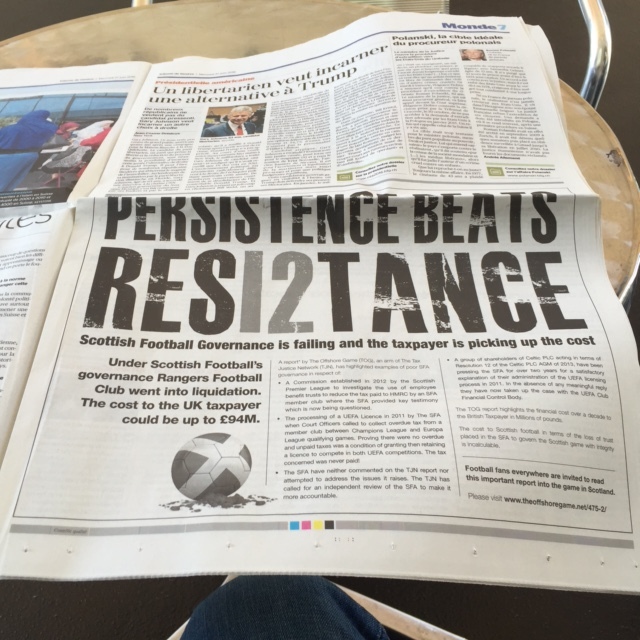 Essentially the SFA , for all their faults, are saying it is now a matter for UEFA and that they have not only provided the correct contact details to the Celtic shareholders but will also fully cooperate in any UEFA investigation. There is plenty more that we could say about this but we wanted to talk about the ‘Resolution Riddy’, which is a feature posted on one of the more extreme ‘Rangers’ blogs and has been the cause of great amusement on their forums.

Here’s what the Resolution Riddy feature says with our clarification below each paragraph.

“I understand Dear Reader that there is some tension between the intrepid Resolution 12 people today following a rather costly mishap in their attempts to re-ignite the issue.”

Everyone involved in this initiative is delighted with the placement in the Tribune de Geneve, indeed we may have further insertions in that newspaper over the next week or so. There certainly was no ‘costly mishap’ involved.

“The clever lads crowdfunded circa £4000 and even more brilliantly found an accommodating sales executive at a Swiss newspaper who confirmed he would happily print any ad which was free of offensive language.  Off to work they went and produced their piece (a standard diatribe about Rangers being deid and pyuir cheats etc).

They are miles out on the sums raised (as they were the last time with their speculation around the New Entity statement in the Sunday herald last year. The sales director involved, the management and the legals may well have had more to say about the content of the Statement and whether it was passed for publication, than a more junior member of the sales team. The sales staff do not work for the Swiss newspaper, indeed they are not even in Switzerland. They are however right saying that Rangers died and that they cheated. 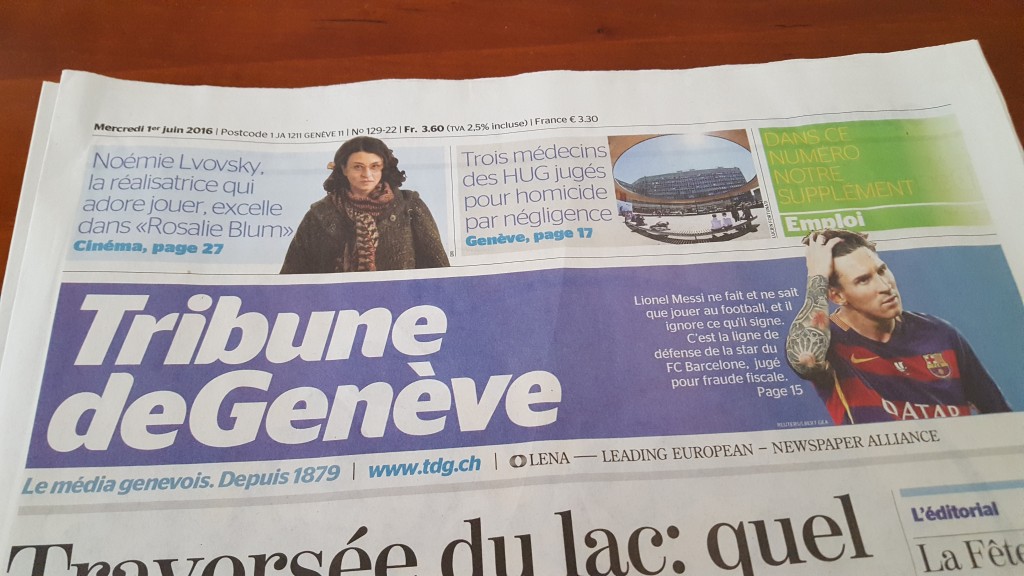 “They had been confidently assured by Paul Brennan via his “UEFA contact” that this was the English language newspaper of choice for UEFA delegates….unfortunately there was a breakdown in communication with his well placed source as the newspaper they’ve chosen is in fact a French language one.  Hilariously the Resolution 12 guys only learnt of their mistake last night and despite some frantic calls begging for a refund it was too late, the money was gone and the public embarrassment was unavoidable.

Stewart Regan himself confirmed that the relevant UEFA names were provided by the SFA themselves. One of the three has English as his first language. The other two are fluent English speakers. You would hope so because they are currently reviewing a detailed submission from Celtic shareholders and will also be receiving a letter over the next few days from Celtic FC. No doubt the SFA have been in touch too.

The idea that those organising this initiative would think that the Tribune de Geneve, as it has always been referred to on CQN, would be an English language newspaper is ludicrous.  Are ‘Rangers’ so gullible to believe this? Maybe, after all they are convinced that they were ‘demoted’ as a ‘punishment’ and that they have been able to keep all their history except the bit about owing around £90m to creditors.

Public embarrassment was far from the case. Stewart Regan, at last opened up about Resolution 12 on the very day the Statement appeared. Three chaps at UEFA got their copies by the specially formed CQN Paper Round in Nyon. Journalists beyond the Scottish lamb-eaters, are taking an interest and even The Herald, who wouldn’t even consider carrying a Statement on Resolution 12 (without even seeing it), are writing about it today.

“Perhaps to compensate they can publish their imminent Guardian ad on the same subject in French?

Watch this space because.

Just like on the statement in the Sunday Herald on the same club myth, they have failed to address the content of the resolution 12 statement. We wonder why…