Although Celtic created the overwhelming majority of chances last night, they were punished for unforced errors.  This is why Malmo are still in the tie.

Lots of positives were evident. Malmo could only foul James Forrest. He is fit and simply unstoppable. Celtic’s least effective periods of the game coincided with when they failed to get James on the ball. When he did get the ball, he often attracted three defenders, which curtailed his options but opened up space for others.

Next week James should find more space. Malmo’s main concern for the return leg will be how to cope with him.

Leigh Griffiths is on fire. He had no right to score his second goal, it was never his ball. The timing of his leap, combined with his reach and finish, were first class. He’ll fancy himself for a goal out there.

Our passing early on was as good as it has been all season but something went wrong, I think Scott Brown and Stefan Johansen’s roles changed. Scott bossed the opening 20 minutes but towards the end of the first half, a tension had crept in.

When our defenders had the ball at their feet, the options they had earlier simply weren’t there. Think back to the early moments when Scott dropped deeper than the two central defenders to give them options in possession. There was one occasion when Brown dropped to collect a forward pass from Boyata, before passing onto Forrest and then Armstrong, who carved an opening, all achieved without resistance. Our movement made Malmo look pedestrian. We lost our way when those options dried up.

We know what we will get from Forrest and Griffiths but the key three Celtic players next week will be Brown, Bitton and Johansen. Hareide criticised Celtic’s fitness, it’s certainly clear that the early pace we set was not maintained, although it could be argued that pace was impossible to maintain.  If Brown, Bitton and Johansen have the stamina to cover the acreage they did for parts of the game last night, we will be comfortable in Sweden.

The major concern is the likely absence of Mikael Lustig. Efe and Dedryck both need immediately-available options in possession. It will be absolutely critical that they are not left to play long clearing balls forward. If this happens, we will invariably lose possession and Malmo will be able to build sustained attacks.

Ronny may decide to deploy Saidy Janko instead of Efe.  Efe got the nod for the bench last night as we needed cover for both central defence and right back (he’s also convered left on occasion).  None of us have enough information on Saidy to offer an informed opinion on this option yet, but he may be asked to step forward.

Malmo got as much out of last night’s game as was possible. They scored two goals and didn’t pass up a good chance. We have the lead and there’s nothing too worrying in what we saw from the visitors.  They will play a different game at home, have more possession and create more chances, but Celtic will create lots of chances of their own.

There’s a hard 90 minutes ahead, but it’s in our own hands, and Ronny’s right, we can win out there.  This tie has a Blackburn feel about it.

One for the golfers……. 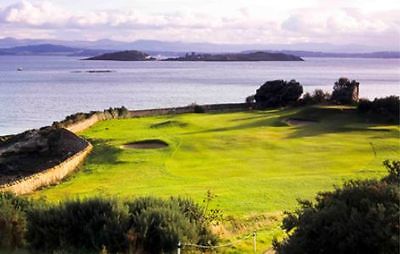 Taggsybhoy is raffling a Round of Golf for 4 at the magnificent Aberdour Golf Course, where our annual CQN Golf Open takes place, to support his Great Scottish Run campaign in aid of the Celtic Foundation.  The auction ends next week and you can bid on it here on ebay.  Check it out, and check out what YOUR Foundation does as well.

This is a brilliant way to get involved and achieve something significant, well done to Taggsy for taking the initiative.

Thanks to everyone who donated as part of yesterday’s competition to win a Celtic Euro shirt, courtesy of Magners.  Special thanks to the winner, Glasgowdave, for allowing us to auction the shirt at a later date.  You’re not a bad lot.