ANGE POSTECOGLOU will be offered a lucrative new long-term deal by Celtic.

The Hoops hierarchy will hold talks with the title-winning manager in the forthcoming weeks to secure his future at the club.

Postecoglou arrived in June from Yokohama F Marinos on a 12-month rolling contract, but the Parkhead powerbrokers are now eager for the 56-year-old Greek-Australian to accept terms which will see him remain in place for the foreseeable future.

Postecoglou has worked wonders since his arrival as he inherited a fractured club in the fall-out of the debris of the previous campaign that saw the historic bid for a tenth successive title obliterated shortly after the turn of the year. 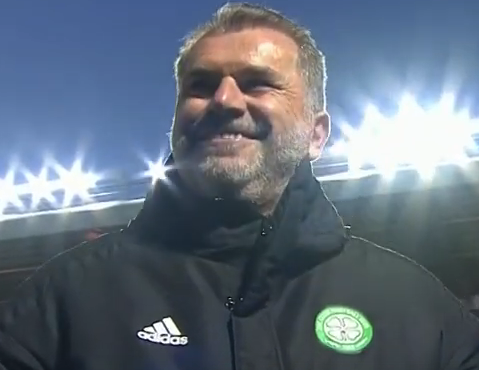 The shambolic team limped in without a trophy for the first time in 11 years while skipper Scott Brown, top scorer Odsonne Edouard and internationals Kristoffer Ajer and Ryan Christie queued up to quit the club.

However, the single-minded gaffer didn’t shirk as he set about rebuilding the squad, 12 players were brought in during the summer, another five arrived in January and the Hoops’ tenth Premiership crown in 11 years was delivered in the 1-1 draw with Dundee United at Tannadice in midweek with a game to spare.

Celtic Park is ready to rock tomorrow long before the 12.15pm kick-off against Motherwell with a grandest of title parties after the misery of the previous term. 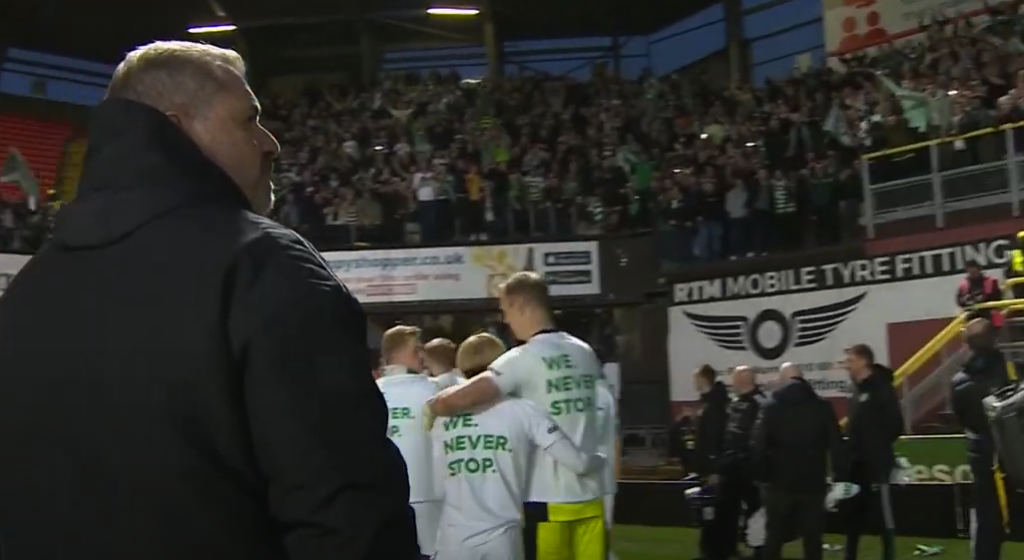 FANFARE…Ange Postecoglou looks to the Tannadice stands as the Celtic followers celebrate the midweek championship triumph.

The Premier Sports League Cup, of course, was duly won in December when a double salvo from Kyogo Furuhashi, a player identified by the manager during his time in the J-League, downed Hibs in a dramatic showdown at Hampden.

Now talks wil be opened with the boss and his representatives to make sure everything is in place before the new season with a £40million windfall assured in the group stages of the Champions League, according to a report in the Daily Record.

The board want to reward Postecoglou with improved terms as he prepares to raid the transfer market for a third time in his quest to strengthen a squad that failed to cope with the demands of the European challenge in his debut term.

With the manager’s future settled, he will be able to concentrate on his signing targets before the big adventure restarts after a short summer break.

First, though, there is the little matter of a title party in the east end of Glasgow tomorrow afternoon.