CELTIC have restarted plans to launch a hotel and museum at Parkhead.

The champions submitted a fresh planning application to Glasgow City Council on July 6.

The proposal detail the ambition of the club to erect a hotel, shop, ticketing facility and museum with associated access, car parking and landscaping works on land to the west of Celtic Park.

Planning permission was initially granted for the multi-million pound project back in September 2017, subject to a condition that the level of retail floorspace be limited to 1500 square metres and no individual retail unit should exceed 400 square metres to protect existing local shopping centres. 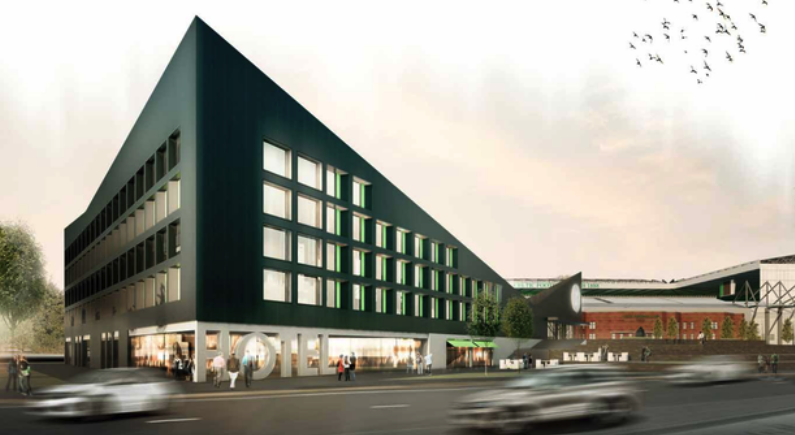 Artist’s impression of hotel and museum at Celtic Park.

The club, however, did not proceed with the plans and have now been re-submitted for the 2.2 acre site of the existing shop and ticket office, which will both be integrated within the new design, according to a report in Glasgow Live.

It also incorporates a hotel with approximately 175 to 200 bedrooms, the design of which, according to the plans submitted by Glasgow architect Holmes Miller, “aims to enhance the works already delivered in the area including the Clyde Gateway regeneration”.

The hotel will house a restaurant, bar and kitchen as well as a meeting and conference area, while the plans for the adjacent museum include for a building of approximately 1000m2.

As part of the ground-breaking scheme, the Celtic Way will be untouched and the existing nearby car park will be developed as a drop-off area for the hotel.

The planning application is pending consideration by Glasgow City Council.