JEREMIE FRIMPONG has sealed his £11.5million move from Celtic to Bayer Leverkusen.

The Dutch right-back agreed a four-year contract at the Bundesliga outfit to end his 16-month stint at Parkhead, as CQN reported yesterday.

Frimpong, who arrived at the Hoops in a £300,000 switch from Manchester City on September 2 2019, played his last game for the club as a late substitute in last week’s 2-2 draw with Livingston in West Lothian.

The 20-year-old defender expressed his delight at the big-money switch and told the Leverkusen’s Official Website: “I’m totally looking forward to the Bundesliga and, of course, this club in particular. 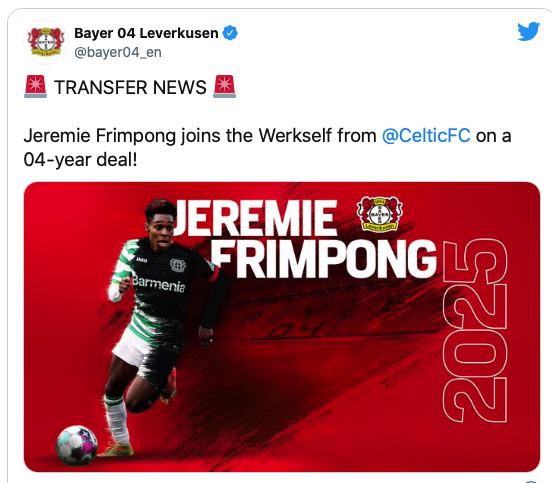 “Bayer 04 Leverkusen have regularly been in the Champions League and the Europa League.

“They demonstrated their ambition on the European stage last year in the two games against Glasgow Rangers.

“I really like the offensive, fast and technical style of play at Bayer 04 and I hope I can soon help the team.”

Rudi Voller, the former German international striker who is the club’s sporting managing director, added: “We have completed a transfer completely in the spirit of Bayer 04 with the signing of Jeremie Frimpong.

“Young, accomplished on the ball, versatile, with top pace and a very lively style of play – players like that fit in with the way we want to perform on the pitch.

“If Jeremie continues in the same way in the coming years with the consistency he has shown up to now then he could be an important part of our team.”

Celtic tweeted: “We would like to thank Jeremie Frimpong for his contribution to the club and wish him all the best for his future career.”

Neil Lennon admitted the player expressed a desire to leave the club “six or seven weeks ago” after revealing the champions had received a “really robust offer” for the pacy wing-back.